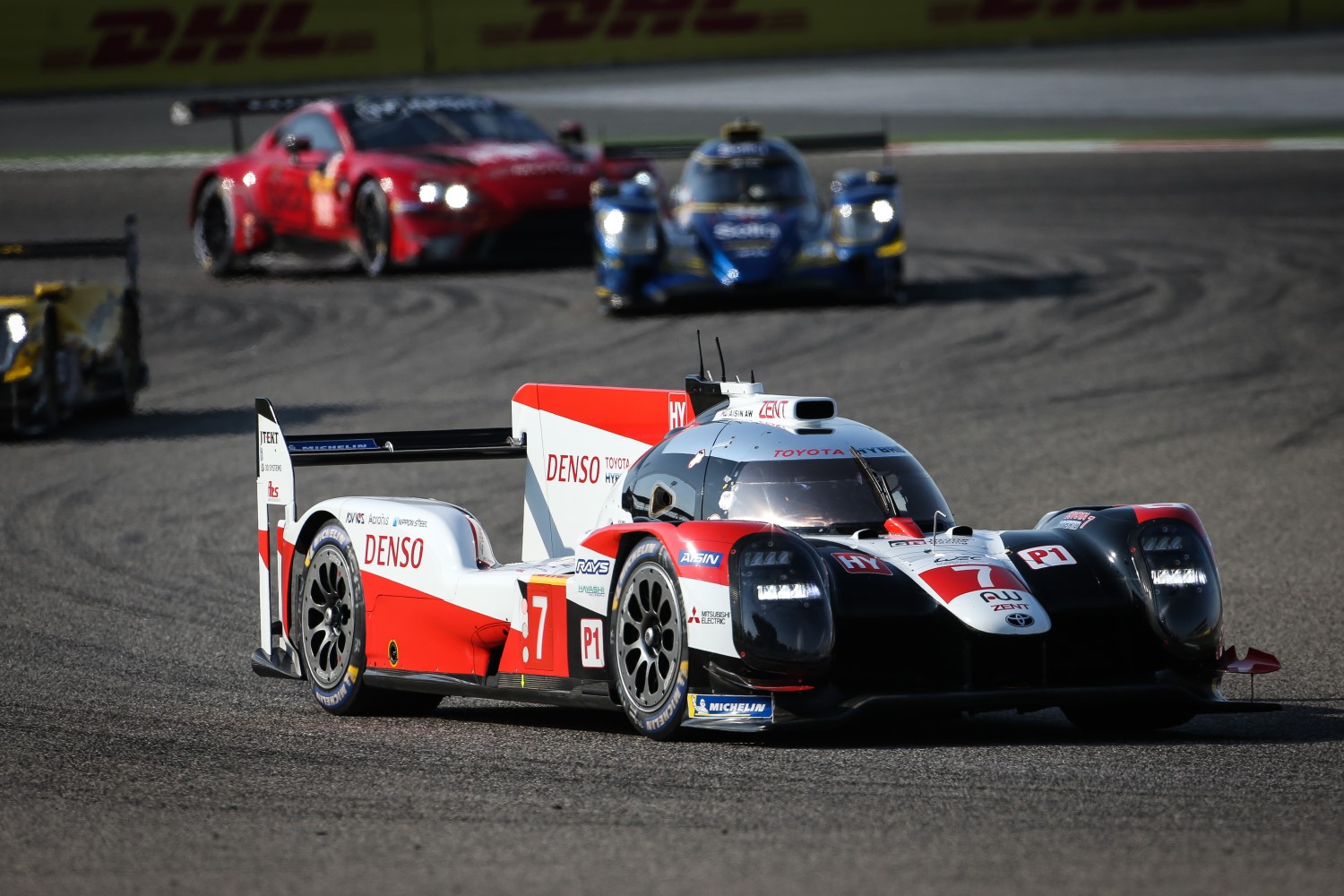 Mike Conway, Kamui Kobayashi and José María López won the 2019-2020 FIA World Endurance Championship (WEC) title with victory in the eighth and final race of the season as TOYOTA GAZOO Racing said goodbye to its three-time Le Mans-winning TS050 HYBRID with a one-two in the 8 Hours of Bahrain.

The #7 TS050 HYBRID crew overturned a points deficit in the season finale to win from pole position, finally earning a well-deserved major title after suffering heartbreak in the Le Mans 24 Hours in the last two editions.

Conway, Lopez and Kobayashi end the season with 107 points – just five points ahead of the sister No. 8 car shared by Brendon Hartley, Sebastien Buemi and Kazuki Nakajima who take the runners-up spot in the drivers’ championship.

Sébastien Buemi and Kazuki Nakajima, the outgoing World Champions, alongside Brendon Hartley in the #8 TS050 HYBRID delivered a perfect result for the team, earning second place, 64.594secs behind.

Today’s race brought the curtain down on the LMP1 era in endurance racing, in which TOYOTA has participated since 2012. In its 64 races, the team has won 29 races, earned 26 pole positions and set 24 fastest laps, winning both the teams’ and drivers’ World Championship in three of its eight seasons.

During that period, fuel consumption has been reduced by 35% while lap times at Le Mans improved by around 10 seconds per lap, with the team’s final LMP1 car, the TS050 HYBRID, writing a new page in endurance history by setting the fastest-ever lap around the legendary Circuit de la Sarthe.

Conway started from pole position and established a lead which Kamui and José would extend consistently throughout the next eight hours. Fighting against their success handicap was a difficult challenge for the #8 crew despite a valiant effort, first from race starter Sébastien, then Brendon and Kazuki.

The gap expanded to 75 seconds soon after the half distance mark, when it was all but eliminated by a safety car for debris in the entrance to the pit lane. First Kazuki, then Sébastien, put the pressure on the #7 car’s lead but José, and soon after Mike, held their nerve and rebuilt the lead.

Going into the final quarter of the race, the lead was around 30secs, leaving no margin for error for the #7 car. But they rose to the challenge and established a one-minute lead in the final hour, with Kamui crossing the line to win after 263 laps, taking the World Championship title in the process. Kazuki was at the wheel of the #8 as it finished second in the race and in the standings, five points behind.

Jackie Chan DC Racing ended the FIA WEC season on a high with the No. 37 car’s first victory of the season in the ORECA 07 Gibson shared by Ho-Pin Tung, Gabriel Aubry and Will Stevens.

Aubry provided a thrilling battle in the closing stages of the race as he and Antonio Felix Da Costa in the No. 38 JOTA car were neck-and-neck fighting for P1, with Aubry crossing the finish line just 1.894s ahead of Da Costa to take 38 championship points. The JCDCR’s win is the second WEC victory for a car equipped with Goodyear tires.

The Racing Team Nederland ORECA shared by Nyck de Vries, Giedo van der Garde and Frits van Eerd took third place.  United Autosports, which wrapped up the teams’ title at Le Mans in September, ended up nearly half a minute behind in fourth following a fuel glitch, a five-second penalty and a spin out on track half-way through the race. The British squad has also wrapped up the teams’ titles after Phil Hanson and Filipe Albuquerque accrued enough points to take the accolade – third team-mate Paul Di Resta missed out after missing a championship race in Fuji.

Elsewhere, Signatech Alpine Elf finished fifth – the French squad struggling to fight back after a small off in the race’s second hour with André Negrao at the wheel.  Italian Cetilar Racing finished sixth in class, the crew losing time due to a late brake change and a lengthy spell in the pits at the end of the race.

The No.92 Porsche 911 RSR-19 of outgoing GT Champions Kevin Estre and Michael Christensen had a dominant run to victory in the always closely-contested class, finishing just 2.8 seconds ahead of the sister Porsche GT Team No.91 entry to make it a 1-2 for the German manufacturer.

It was Porsche’s first GTE Pro victory in Bahrain since 2015 and the win takes it past the milestone of 50 victories in the WEC.  The result also means that Porsche finishes second in the FIA GTE Manufacturers championship.

Third in class went to the No.71 AF Corse Ferrari 488 GTE EVO of Davide Rigon and Miguel Molina, the duo upholding Ferrari honor after the title-contending No.51 Ferrari of James Calado and Daniel Serra – subbing for an absent Alessandro Pier Guidi – struck misfortune.  Just after the halfway point in the race Serra had contact with a GTE Am car and the resulting puncture caused left rear damage.  Although the repairs were rapidly carried out, they were 4 laps behind and went on to finish a lonely 6th in class.

Despite a tough race thanks to an ill-timed Full Course Yellow and overheating brakes which necessitated a disc and pad change after 4 hours, 5th place in the GTE Pro class was enough for Aston Martin Racing’s jubilant Nicki Thiim and Marco Sørensen to secure the FIA GTE World Endurance Drivers Championship.

It’s a first full FIA World Championship title for the Danish duo but the second time they have taken the title for the category – the first being the FIA World Endurance Cup in 2016. Aston Martin Racing sealed the FIA GT Manufacturers Championship following victory in Le Mans in September.

The No.97 Aston Martin entry of Maxime Martin and Richard Westbrook – the latter standing in for Alex Lynn for this round – finished a lap ahead of the Dane Train, and the 4th place saw Belgian Martin take 2nd in the Drivers’ final classifications.  This entry also suffered overheating brakes and also had to pit for new brakes.

Although AF Corse Ferrari had a tough time in the Pro category, it all came good for them in GTE Am after an exciting race which saw multiple different names at the top.

Second place for the No.83 488 GTE EVO of Emmanuel Collard, François Perrodo and Nicklas Nielsen and a less than perfect race for points leader TF Sport saw them take the 27 points on offer for the 8-hour race and wrap up the FIA World Endurance Trophy for LMGTE Am.  It is Perrodo and Collard’s second title and a first for Nielsen in the WEC.

Claiming a final win for the outgoing Porsche 911 RSR was the No.56 Team Project 1 of Egidio Perfetti, Larry ten Voorde and Jörg Bergmeister, the tall German making his first WEC appearance this year in place of Matteo Cairoli.  It was Perfetti’s third win of the year and ten Voorde’s second, his last coming a year ago in Bahrain.

Third in class was the No.88 Dempsey Proton Racing Porsche of Emirati Khaled Al Qubaisi, Jaxon Evans and Marco Holzer.

Pre-race title pretenders, the No.90 TF Sport Aston Martin Vantage AMR of Salih Yoluc, Charlie Eastwood and Jonny Adam, were also hampered by the same braking issues as the Pro entries and lost too much time.  They finished just one laps behind but back in 8th place in the well-populated category.

The majority of the race was held under Bahrain International Circuit’s impressive floodlights, finished at 10 pm local time.