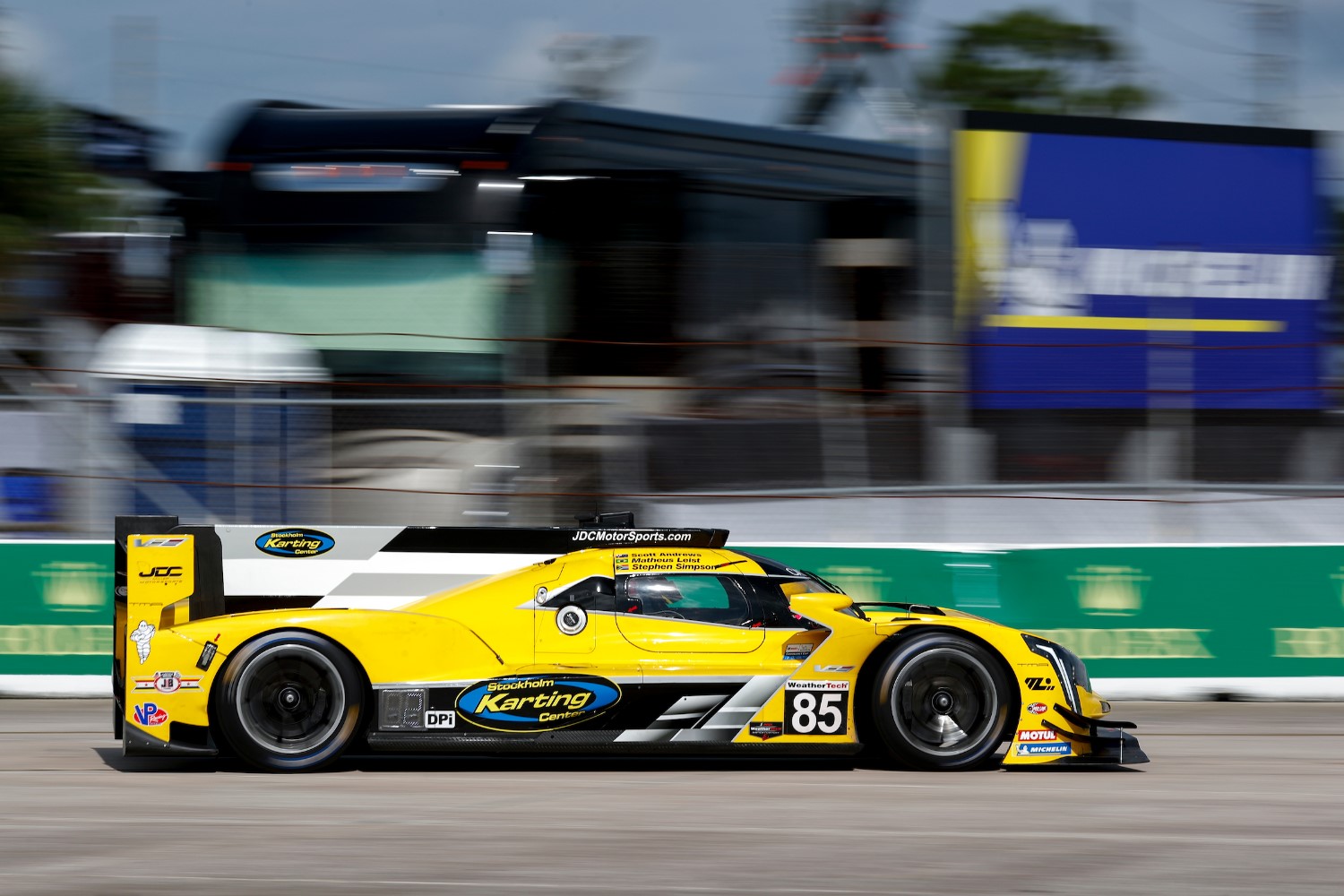 Cadillac won the 2020 IMSA Michelin Endurance Cup today with the No. 85 JDC-Miller Motorsports Cadillac DPi-V.R the top finishing car for the brand at the IMSA WeatherTech SportsCar Championship Mobil 1 Twelve Hours of Sebring.

The 68th running of the 12 hours of Sebring was full of contact and hard racing from the Cadillac contenders.

At the start of the 12-hour race, Renger Van Der Zande was overly aggressive on and pulled the No. 10 Cadillac DPi-V.R out of line prior to crossing the start stripe and had to serve a drive thru penalty. Five hours into the race, the 10 tangled with the No. 77 Mazda and had to go back to the garage for repairs, going down five laps. The 31 Whelen Engineering Cadillac DPi-V.R was battling for the lead with just two-hours-and thirty minutes to go and had contact three times with the No. 6 Acura resulting in steering damage. Derani had to pit the red Cadillac for repairs sending him down three laps.

“It was an extremely late call-up from John Church [team owner] to come and race this weekend,” Andrews said. “The last few days have been surreal; I’ve wanted to do this race for so long. It took me a little bit to get my head around the car on Thursday. Definitely thrown in the deep end. I just focused and sorted myself out. I really like the TC [traction control] in this Cadillac DPi-V.R. It’s amazing! We really put it together for the race. We did some unexpected things from this small team. I want to thank Cadillac and Dallara for their support and a massive thanks to John and his team. I hope to do some more next year.”

As all of this drama was playing out the trio of Sebastien Bourdais, Tristan Vautier, and Loic Duval also ran a trouble-free race in the No. 5 Mustang Sampling Cadillac DPi-V.R. With just 90 minutes remaining an end plate broke, forcing the team to make an extra pit stop to replace the rear wing section sending them down to fifth.

“I am super disappointed,” Vautier said. “We had the pace to win this race. We showed it by leading quite a lot. We had to change the rear of the car and that set us back late in the race. We had the car to win today. If someone would have told us that early in the weekend, we would have been happy about it. It was a good run for the team today. The team and the drivers performed well, just some bad luck. No heads down as we look forward to 2021.”

The Wayne Taylor led team with drivers Van Der Zande, Ryan Briscoe, and Scott Dixon made the repairs from their early incident to come back and finish seventh in the No. 10 Cadillac DPi-V.R. The team took home a season ending team trophy, the IMSA Michelin Endurance Cup for the DPi Class.

“We have to look at the whole season because we had a great year,” Briscoe said. “We won some really big races and it just came down to a point at the end of it all with the No. 7 Acura. We had a bit of bad luck today, which was very unfortunate, but all the contenders had bad luck. The No. 7 car just came out on top as they really dominated the second half of the season. We need to be proud of everything we did this year.”

Derani, Felipe Nasr, and Gabby Chaves drove the No. 31 Whelen Engineering Cadillac DPi-V.R like they had nothing to lose. Contact once again between Derani and the No. 6 Acura did damage to the red Cadillac’s steering forcing the Brazilian to pit for repairs. The team crossed the line in sixth.

“It was a rough ending,” Chaves said. “Everyone did an amazing job to put us right where we needed to be to win it. That’s just the way racing goes sometimes. Unfortunately, it didn’t go our way.”