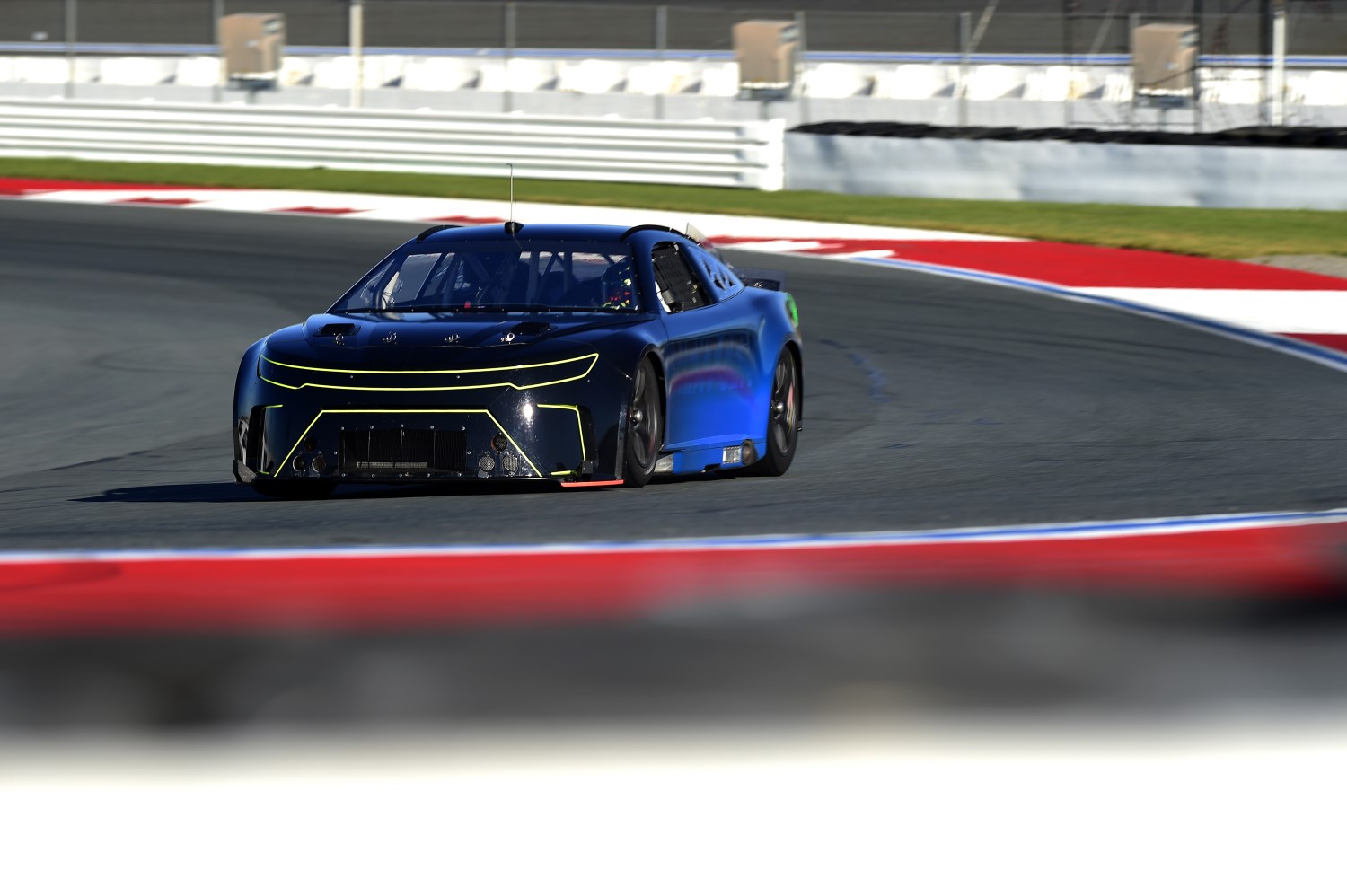 CHIP GANASSI RACING’S, KURT BUSCH, is participating in a two-day Next Gen test held by NASCAR at Charlotte Motor Speedway. Kurt Busch met with media via teleconference to discuss his thoughts after the first day of the test, what he’s learned from the test so far, and more. Transcript:

IT WASN’T ALL THAT LONG AGO THAT YOU RACED THIS TRACK. GIVE US A COMPARISON OF HOW THIS DRIVES COMPARED TO WHAT YOU HAD THE LAST TIME YOU RACED HERE?

“Today has been a fun, exciting, interesting day. It feels like the first day of school because of how different the car is. With the sequential gearbox, that’s the most fun. I love shifting through the gears. Sequentially, you have to go second, third, fourth, fifth, and then you have to go back fourth, third, second. It’s not your typical H-pattern that we’ve had. So, this gearbox is fun to drive. The brakes are much bigger and the car can stop a lot quicker. And then, we actually have a hybrid horsepower range. Right now, we’re not in the full 750hp, but we’re not the low 550hp.”

“But, overall, the car’s first impression is that it’s fun, it’s exciting and different, and I encourage everybody to dig into it to find its differences and to respect the process that NASCAR is going through to implement all these new, exciting components. A new front bulkhead, a new rear bulkhead, and, overall, the cars driving and its feel. Out on the ROVAL, it feels like I’m qualifying every lap because of how impressive the lap times are and how much grip the car has in certain spots of the race track. Overall, a lot of fun. It’s neat working with all these different people trying to sort out a car that has never been on a road course before.”

YOU’RE A GUY THAT’S DRIVEN SPORTSCARS AND MARTIN TRUEX JR. HAS NEVER DRIVEN A SPORTSCAR. DOES THIS FEEL MORE LIKE A SPORTSCAR COMPARED TO THE BIG, STOCKY STOCK CAR THAT YOU GO AROUND THIS TRACK IN?

“It’s a good marriage between the two. (inaudible) With the independent rear suspension, there’s different lingo and talk about anti-dives,(inaudible), and different ways we’re going to adjust these cars instead of your typical track bar or wedge. So, there’s a lot of adjustments and a lot of new terminology. Driver to driver, they’re going to figure it out, and then you have to go to the next level in how you translate that information to your crew and how the crew goes through the new components and finds out what’s the most effective. That’s going to make things different.”

“It’s a one-lever, sequential gearbox shift. So, you start out in neutral and then you’ve got to go first, second, third, fourth, fifth, and down fourth, third, second, first. And so, you can’t just go through the H-pattern and go to whatever gear you want – you have to go through them all.”

HOW PROBLEMATIC WOULD THAT BE WITH TRANSMISSIONS FOR GUYS THAT HAVE NEVER BEEN FAMILIAR WITH THAT PATTERN?

“It won’t be too bad. I think a racer will figure it out. A lot of us drove Legend Cars and that’s a motorcycle, sequential gearbox. That’s the easiest comparison. It might not be the most handsome and powerful comparison, but like an Australian V8 Supercar or a Sand Rail (inaudible).”

“We’ve been on different ends of the track. The focus is to go through tires for Goodyear and finding the best combination. There’s a Watkins Glen tire here, there’s a Mid-Ohio tire, and there’s also a Sonoma tire that we need to run. I think we’re just trying to log laps on components for road course stuff and then Wednesday will be the primary focus on getting the cars out there together, seeing how they manipulate the air and if they’re less effected by the air.”

IS THIS CAR, IN DRIVING IT COMPARED TO WHAT YOU NORMALLY DRIVE, DOES IT TURN BETTER? DOES IT STEER BETTER? ARE YOU ACCELERATING QUICKER OR BRAKING LATER?

“Yes, everything. It even sounds roadier and deeper. The sound was very cool. I don’t get to hear cars a lot because I’m in the car racing, but to hear Truex go around and to hear the split exhaust – one pipes out the left, one pipes out the right – that’s an old school, Trans Am-style, thundering power feel. But the car accelerates quicker, it stops quicker, it turns quicker, it’s more nimble. All the lap time that’s been gained is through the infield section with the independent rear suspension and the ability to shift quicker. So, really the car, I don’t want to use the word ‘steroids’ – it’s just the car is more effective and the car is more sensitive to changes and to feel, even with a shorter side wall. The car is riding smooth, but you feel everything more vividly.”

SOME OF THE EARLIER TESTS, THE GUYS WERE COMPLAINING ABOUT TWITCHINESS IN THE STEERING. WHAT ARE YOUR THOUGHTS ON THE WAY THE STEERING FEELS AND WHETHER IT’S TWITCHY, HOW RESPONSIVE IT IS, OR HOW SOFT IT IS?

“So, we’re doing good right now. They still have one more change to make things firmer – to have the sensitivity turned down a little bit more. Right now, yes, it’s on the aggressive side for feel, twitchiness and movement. But, we’re at a road course for the first time and I like its movement back and forth, left to right. But, on the oval sections, it’s a little bit on edge and we need to try to perfect that and that’s more of the Wednesday focus. We will run different valving tonight to help with the steering just to see what that change does. But road course stuff, we’re in the box. Oval, we’ll know more on Wednesday.”

I KNOW YOU GUYS HAVE BEEN IN AND OUT MULTIPLE TIMES. DO YOU HAVE ANY KNOWLEDGE OF WHAT KIND OF CHANGES THEY’RE MAKING BETWEEN RUNS? ARE THEY THROWING BIG THINGS AT IT OR JUST SMALL PRESSURE CHANGES AND STUFF LIKE THAT?

“I would say we’ve done pretty good to have aggressive changes so far. Small changes and different tire compounds have been across the car. My brain is swirling about all the gears that I want to change in the gearbox, but we’re just going to leave it for today. But yeah, the car is reacting well to typical changes and to new things that we’re talking about, as far as anti-dive, anti-squat. The caster changes we haven’t done yet are much different than years’ past with the way the shocks mount to the control arms and the wishbones. So, a bunch of new stuff to learn.”

HAVE YOU GUYS BEEN RUNNING THE SAME RATIOS IN THE BOX ALL DAY?

“Yes, same ratios. I don’t know what Truex has in his, but it’s in the ballpark.”

“We’re just trying to get a lot of the big things done on NASCAR’s checklist, instead of trying to fine-tune for speed. We’ll worry about that in 2022.”

WAS THERE ANYTHING YOU DIDN’T LIKE ABOUT DRIVING THE CAR?

“So far, everything has a reason for either the twitchiness, the comfort level in the braking zones or even the feel out on the oval. It’s all had a reason for why it did what it did. (inaudible).”

WAS IT WHAT YOU WERE EXPECTING IT TO FEEL LIKE?

“You know, it was like the first day of school, honestly. There’s so much to look at, digest, and feel. Overall, though, I still have yet to even see the laps times, but they told me it’s been an impressive pickup of speed versus the traditional car. So, to me, that says Next Gen all over it – when you’re going faster, turning better, accelerating harder, braking harder and braking faster. Just faster is better, so we’ll keep fine-tuning it.”

ARE YOU PLANNING TO RUN THE SAME CAR WEDNESDAY?

“Yes. That car that’s behind me – tomorrow, they’ll switch all the components over for oval track settings and then go out there on Wednesday.”