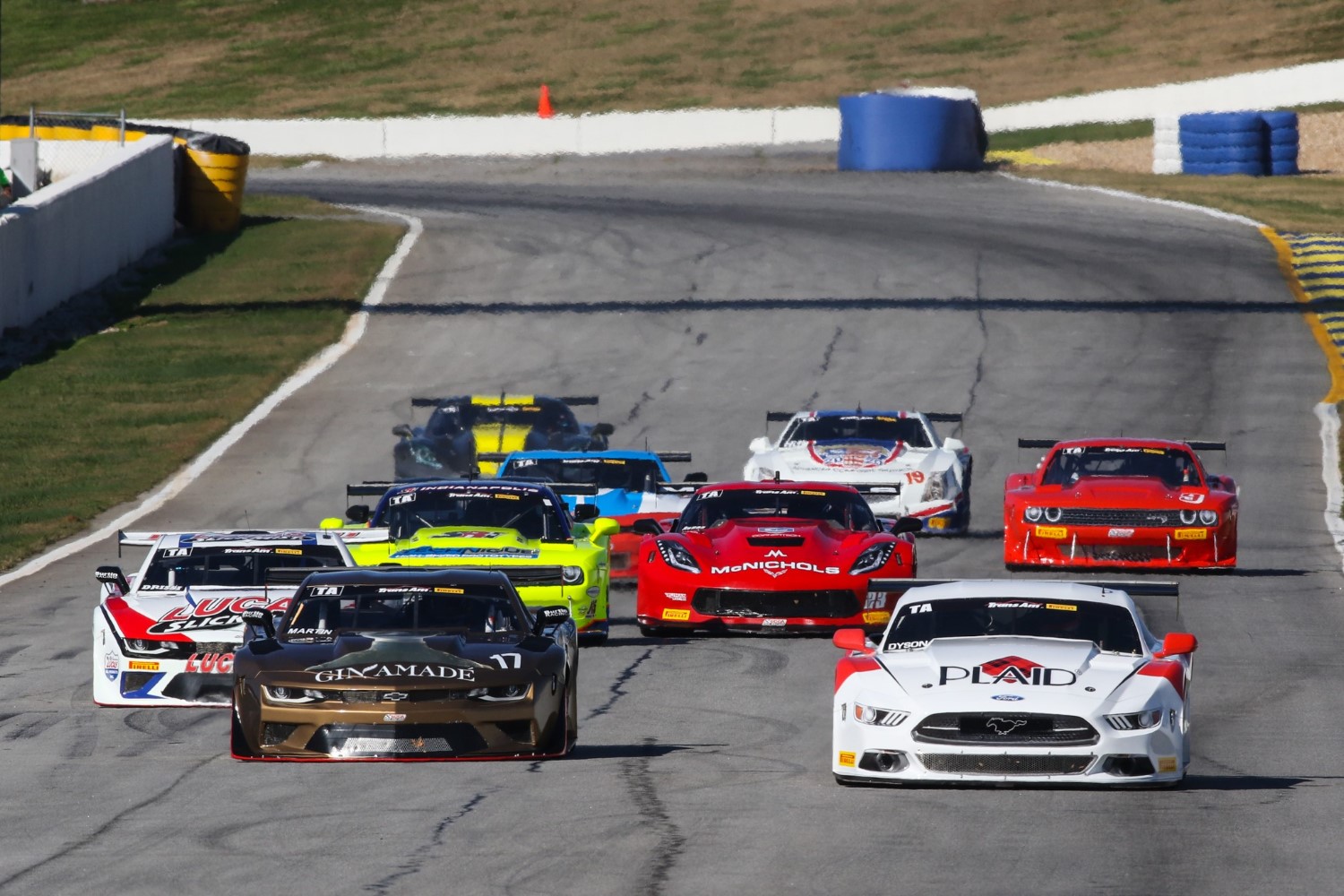 After Chris Dyson stormed to the lead at the start, Ragginger took advantage of  Dyson’s early race mechanical issues to take the lead on lap 13 in the No. 17 Gin Amade Chevrolet Camaro and led the rest of the way in the 100-mile event, edging teammate Tomy Drissi by just 0.174-seconds at the checkered flag.

“My crew worked so hard for me to take the victory,” Ragginger said. “They deserve it more than I do. Everything went as planned. We had a good qualifying and a good race. I had quite a good lead. At the end we wanted to get a good picture of Burtin Racing 1-2 at the finish, so I slowed up. I just want to thank the whole team of Burtin Racing for giving me an amazing car, we’ve been fast all weekend, so I am looking forward to Sunday’s race.”

Burtin Racing finished 1-2 at Road Atlanta with Lawrence Loshak and Drissi in 2019.

“There are no team orders here,” said Atlanta-based car owner Claudio Burtin. “The best car and the best driver were going to win.”

With championship leader Ernie Francis Jr. retiring after only two laps, Drissi was looking to cut into a once-commanding 43-point lead.

“Ernie didn’t get hurt too bad, but we’re making it interesting,” said Drissi. “That kid, and that team, deserve everything they can get that’s good. But I don’t want it to come down to bad luck – I want to win it straight up in a fight.”

Ragginger has been the best man all weekend, leading practice and qualifying, although Dyson gave him a scare at the start. The New Yorker got the jump at the start and led the opening 12 circuits in the No. 20 Plaid Ford Mustang. Dyson spun in Turn 6 on the following lap, and retired shortly thereafter with power steering failure.

Ragginger led the rest of the way for his first overall victory and second career Trans Am triumph in four starts. He took a TA3 International class victory at the 2015 Daytona finale in his series debut.

After blowing an engine in qualifying, Francis parked his No. 98 ZF Concept Concepts Ford Mustang after only two laps with clutch problems. Entering the race with a commanding 43-point lead, Drissi now unofficially closed the gap to 31 points entering Sunday’s finale, a 100-mile race for all five classes.

“We’ve had a tough weekend, a tough year really,” Francis Jr. said. “We had a clutch issue with the car but luckily we were able to take the green flag and get a few laps in for points which helps us out. We are digging into it, going to get it all fixed up, and ready for tomorrow to try and take it home to finish this thing.”

Boris Said followed Drissi through traffic in the closing laps to take third in the No. 2 Weaver Racing/SRI Performance Dodge Challenge, finishing 1.108-seconds back at the checkered flag. 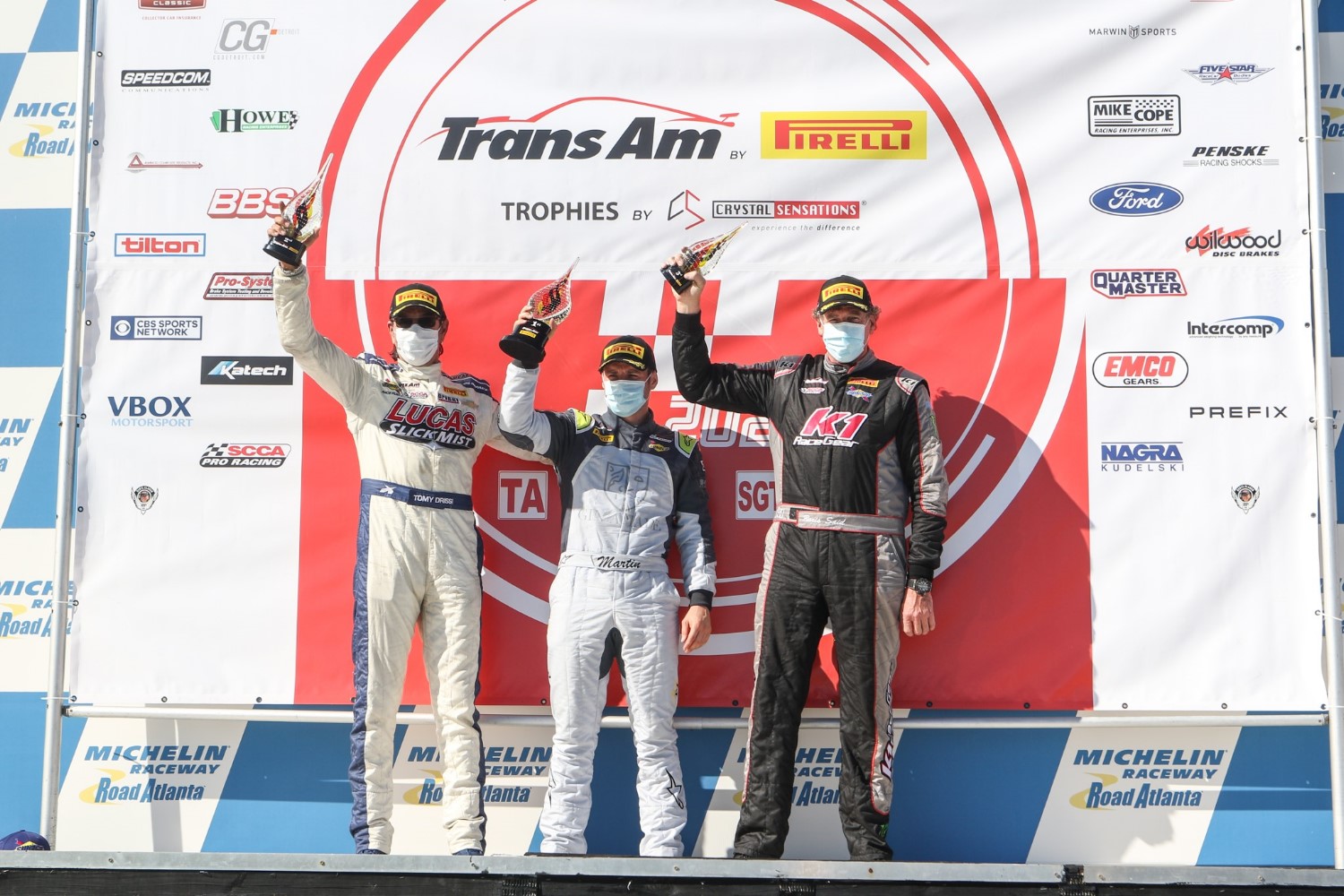 “I feel alright about a third-place finish,” commented Said. “This car was good enough to win. I just didn’t do the best job I could out there today. This is the most nervous I’ve been in a race. My son [Boris Said IV]  is about to go out for his first race in a Miata, so it’s a completely different feeling for me. But, what a track. The Trans Am cars are great, 850hp around here is an unbelievable ride. It’s a blast running with these guys.”

Justin Marks took fourth in the No. 99 Trackhouse Camaro, followed by Amy Ruman in the No. 23 McNichols Company Corvette.

Kerry Hitt was the Masters winner, placing eighth in the No. 19 Advanced Composite Products Cadillac CS-V.

Dyson will start Sunday’s combined race on pole by virtue of recording the fastest race lap, 1:20.382-seconds, followed by Ragginger, Drissi and Said.

Ken Thwaits ran an uneventful race, leading all the way in XGT in the No. 5 Franklin Road Apparel Audi R8 GT3 Ultra. The win secured the inaugural XGT title, unofficially.

“You never know if you’re going to get a yellow – so you can get a rest – but not this time,” Thwaits said. “Justin Oakes and I had a good battle at the beginning, but traffic allowed me to get a gap on him. Then the TA cars started coming through, and it was give and take. I am the first XGT champion – we finished all nine races this year.”

Justin Oakes dominated SGT in the No. 11 Droneworks Corvette. After finishing third in XGT in his Trans Am debut at Circuit of The Americas, Oakes changed to an SGT-specification engine. He also secured the Cool Shirt award.

“I started racing six months ago,” Oakes said. “This was my first win, and yesterday was my first pole. It just went great. We knew our pace was fast, so we just maintained it and saved the tires in case we got a double-yellow. We had a pretty big margin, so we’re very happy with that.”

Lou Gigliotti finished second in the No. 28 G2 Performance Corvette, 31.189-seconds seconds back.

Lee Saunders entered the race with a five-point lead over Adrian Wlostowski in the SGT class. Saunders took third in the No. 84 Landsearch LLC Dodge Viper, followed by Mark Brummond in the No., 24 Garage Door Doctor BMW M4 GT4. Wlostowski took fifth in the No. 96 F.A.S.T Auto Mustang, and now unofficially trails by 10 points entering the finale.

Milton Grant was the SGT Masters winner, placing seventh in the No. 55 Sentry Self Storage Porsche 911.1 GT3 Cup. 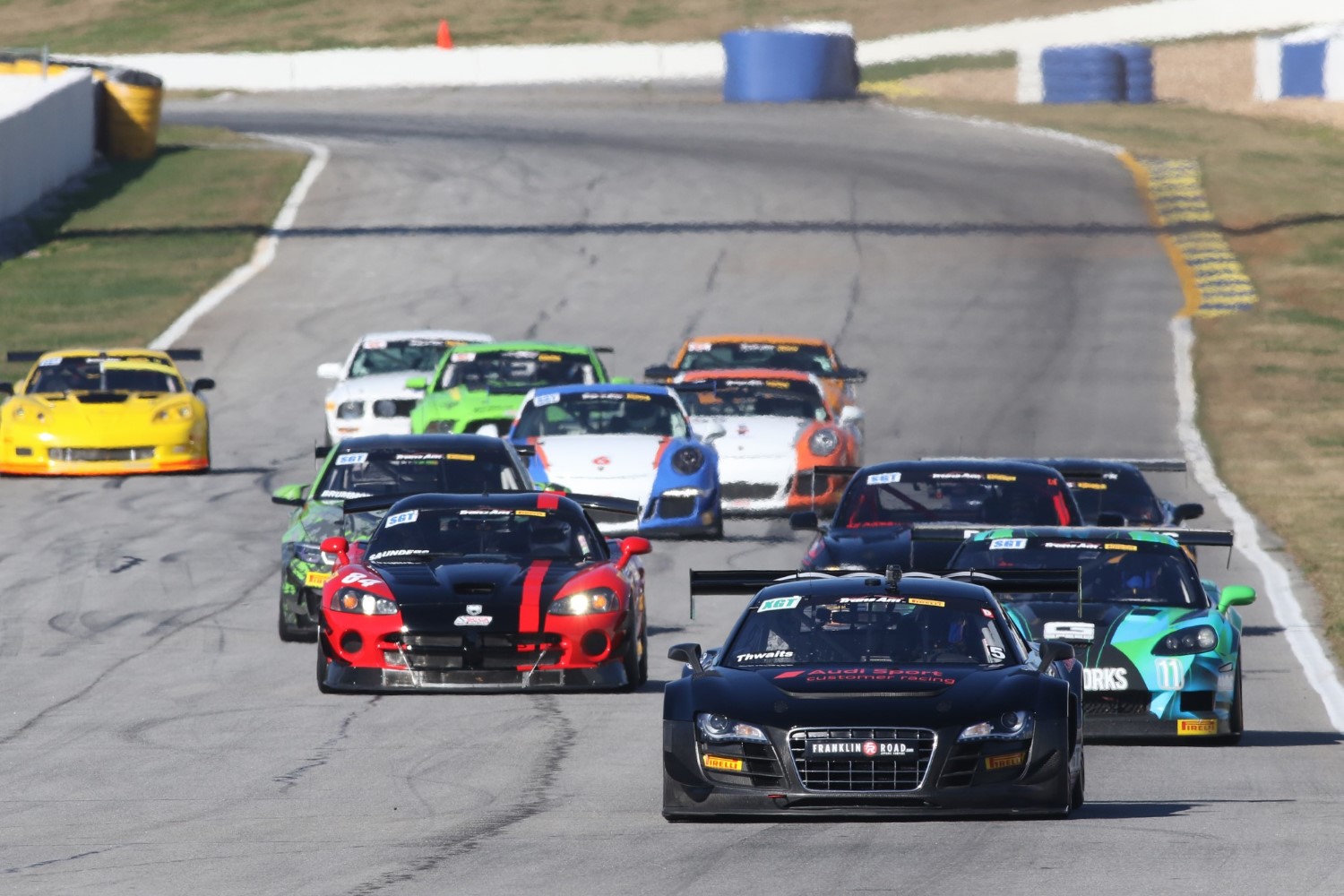 Billy Griffin unofficially secured the GT championship with a flag-to-flag victory in the No. 14 Griffin Auto Care/Sheehan’s Towing Ford Mustang. Griffin entered the race trailing Tim Horrell by 18 points, but Horrell did not compete in the finale due to mechanical issues with his Porsche GT4 Clubsport.

“I love it [on the top step of the podium] and it gets better and better every time,” Griffin said. “This was for the championship as well. The car ran great. We had a little bit of car trouble but we fixed it last night. We were here ‘til almost midnight, but we fixed it and the car was awesome. The track was very busy. Today was the most I ever looked in the mirrors, for sure.”

In an all-Ford Mustang GT podium, Dan Schlickenmeyer made his Trans Am debut by taking second in the No. 37 Griggs Racing/Bath County Collision Ford Mustang, followed by John Baucom in the No. 86 Mustang. Baucom was running in GT for the first time after competing in TA since 2001.

Thwaits, Oakes and Griffin earned poles for their respective classes by virtue of setting the fastest race laps.

Mike Skeen unofficially wrapped up the Trans Am Series presented by Pirelli TA2® powered by AEM championship with a thrilling flag-to-flag victory in the Atlanta Speed Tour season semifinal at Michelin Raceway Road Atlanta on Saturday.

With the sun setting in the background, Cameron Lawrence made a pass to the outside of Skeen in Turn 3 to take the lead in a late restart with only two laps remaining. Undeterred, Skeen fought back and regained the lead in Turn 7, and went on to win by 0.867-seconds in the No. 77 LiquiMoly/Turn 14 Distribution Chevrolet Camaro.

The victory marked Skeen’s fifth win of the season. He now has an insurmountable 57-point lead (unofficially) over Rafa Matos, who finished third. This would be the second-consecutive title for
Team owner Joe Stevens, who also won last year with Marc Miller.

The nine-race campaign comes to a close at noon ET on Sunday with a 100-mile race for all five Trans Am classes. Skeen will start from the TA2® pole by virtue of scoring the fastest race lap of 1:25-159-seconds.

“That thing felt like it would never end,” Skeen said, after having to make three restarts following yellow flag periods. “I had an awesome LiquiMolly car from Stevens-Miller car. Like they’ve done all year, they’ve given me a fantastic piece. It’s been an awesome weekend. We’ve had incredible piece all weekend long, but I was afraid I’d get jumped on one of the late restarts. Cameron had a killer run on that last one, and I thought it was over. I didn’t want to fight him too hard into Turn 1, but he had a little mistake in Turn 7 and I was able to slip by again. That puts an exclamation point on the championship!”