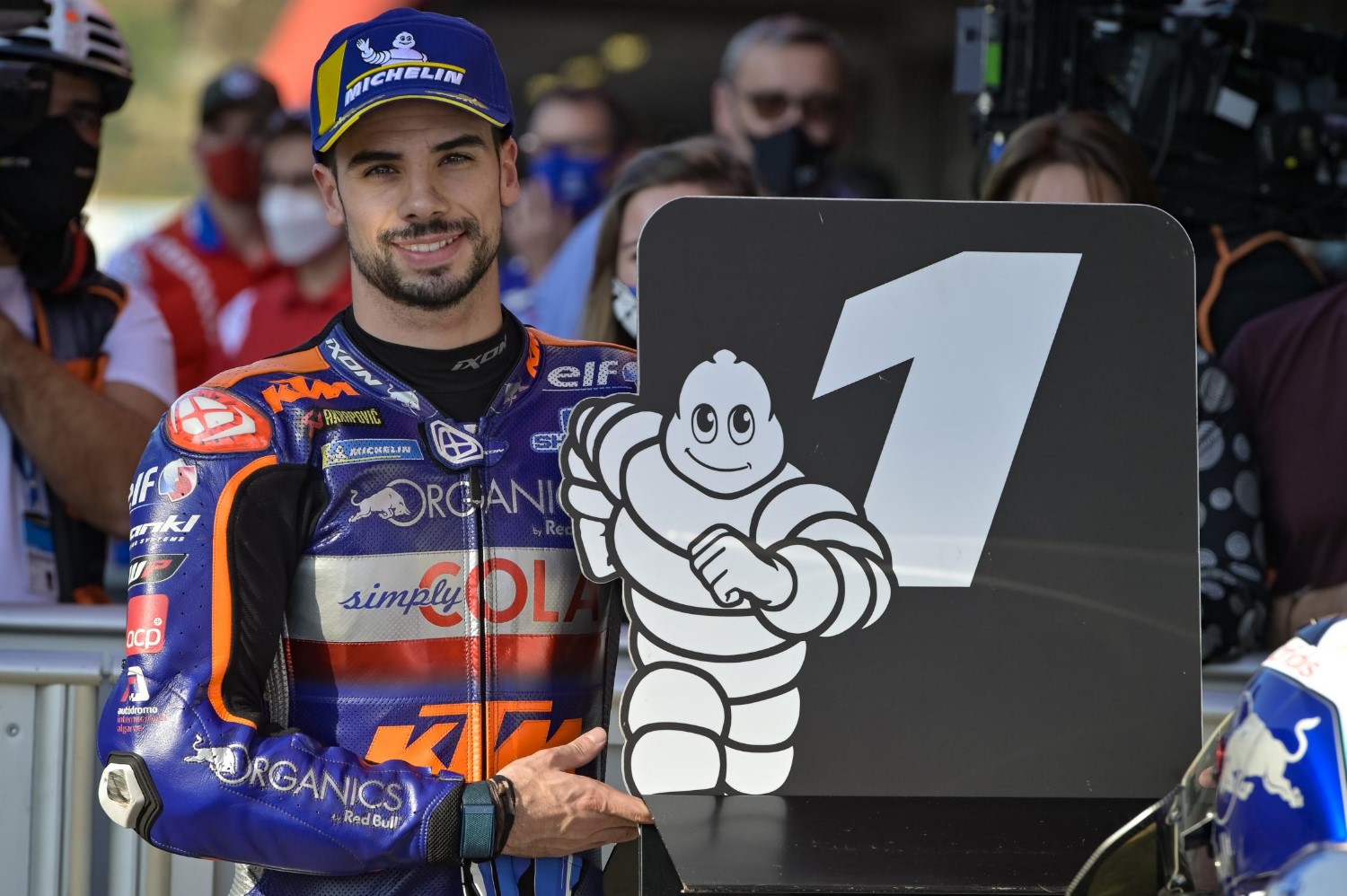 Polesitter Miguel Oliveira (shown above) won the final MotoGP race of 2020 by 3.193s over Jack Miller who took 2nd from Franco Morbidelli on the final lap. Oliveira led lights to flag in what was the best ride of his MotoGP career.

Today’s race was held in sunny, but quite windy weather, with track temperatures at 28°C and the  remainder of the field made the most of  the conditions to produce some amazing battles through the race with Jack Miller (Pramac Racing) and Franco Morbidelli (Petronas Yamaha SRT) repeating their final lap battle from last week for the remaining podium positions.

This time the Australian gained the upper hand and took second, and his result was enough to secure the Constructer Championship for Ducati, whilst Morbidelli’s third gave him the points to take the Independent Riders’ title.

They didn’t see which way he went! 💨

From pole position, Oliveira got the dream start and as the MotoGP™ field plunged down the hill into Turn 1, it was Portugal’s superstar who led the way. Morbidelli and Miller also got excellent getaways from the front row, and they both held station, Pol Espargaro (Red Bull KTM Factory Racing) was away from and the Spaniard was P5 from P9 on the grid. Miller then tried to get past Morbidelli at Turn 5, but the Australian was slightly wide and Morbidelli didn’t hesitate to take P2 straight back.

At the end of the opening lap, Oliveira had a lead of over half a second. And he was pulling clear. World Champion Joan Mir (Team Suzuki Ecstar) had got himself on the fringes of the top 10 from P20 on the grid, but he was almost down on Lap 2 at Turn 3. Mir hit the back of Johann Zarco (Esponsorama Racing) at the tight right-hander and was lucky to stay on, Mir dropping back down to 20th.

Meanwhile, Oliveira was in the zone. On Lap 3 his lead was up to 1.5 seconds and the Portuguese rider was into the 1:39s, Morbidelli and Miller didn’t have an answer for Oliveira on the opening handful of laps. Cal Crutchlow (LCR Honda Castrol) was sitting P4 ahead of Pol Espargaro and Stefan Bradl (Repsol Honda Team), the KTM rider recovering from a Turn 1 mistake to eventually get the better of Crutchlow on Lap 7. Fellow KTM star Oliveira’s lead was now over three seconds. Brilliant, scintillating pace from the Styrian GP winner.

The gap from third place Miller and fourth place Pol Espargaro was 2.7 seconds, with the latter having Crutchlow, Bradl and Zarco right behind him. In the battle for the Constructor crown, it was going the way of Ducati as Rins was the best-placed Suzuki in P8 – both Miller and Zarco were ahead. On Lap 9, Oliveira struck another fastest lap of the race – a 1:39.855 – and his lead was now creeping up to the four-second mark.

Pol Espargaro’s podium hopes in his final KTM appearance were slipping away, Miller was 3.4 seconds up the road as the Ducati man sat half a second behind Valencia GP nemesis Morbidelli. The battle for the lower ends of the top 10 was a feisty one as Fabio Quartararo (Petronas Yamaha SRT) and Takaaki Nakagami (LCR Honda Idemitsu) were embroiled in an almighty tangle, the Japanese rider eventually getting the better of the Frenchman for P9. Andrea Dovizioso (Ducati Team) and Alex Marquez (Repsol Honda Team) then also passed Quartararo.

Pol Espargaro was then wide at Turn 8 after almost losing the front on Lap 12. Crutchlow was now back up to P4 but Pol Espargaro quickly returned to P4. Behind the duo were a whole host of riders: Bradl, Zarco, Rins, Nakagami and Dovizioso, with the three 2020 Yamahas now occupying P13, P14 and P15 – Quartararo leading Maverick Viñales and Monster Energy Yamaha MotoGP teammate Valentino Rossi.

With 12 to go, Oliveira’s lead remained just under the four-second mark. The Portuguese rider was on rails around the roller coaster and with 11 to go, his advantage did then stretch up to four seconds. Suzuki’s fading hopes of the Triple Crown took another blow as both Dovizioso and Nakagami slid past Rins, the latter dropping to P10 with Mir still not in the points – P16 for the World Champion.

In the fight for P2, Miller was still shadowing Morbidelli at just under half a second. And then, with 10 laps to go, the 2020 World Champion’s race was over. A problem with his GSX-RR saw Mir pull into pitlane and it wasn’t the weekend Mir nor Suzuki would have been planning after an epic season. There were no such troubles for a rider on a bike that looked set to become Constructor Champions, Miller set his first 1:39 of the race to haunt Morbidelli.

And after Mir’s retirement, Rins’ race was unraveling. The number 42 was struggling and Rins was now fighting to keep all three 2020 YZR-M1s behind him for P12. Rins vs Viñales vs Quartararo vs Rossi for the final points? 2020 has been a crazy year…

So, the battle for second was now getting properly tasty with 8 laps to go. It was a copy/paste from Valencia between Morbidelli and Miller, but this time it was for P2 as Oliveira’s lead was now 4.3 seconds. Miller was wide at Turn 13 though and lost some ground to Morbidelli, and they were nearly seven seconds ahead of Pol Espargaro. The Spaniard now had breathing space back to a sensational battle for P5, Zarco was leading it from Crutchlow, Dovizioso after a Turn 1 pass on Bradl and Nakagami. Rins was now P14, Triple Crown hopes for Suzuki well and truly out the window and barring a mistake from Morbidelli and an upturn in speed for Rins, P2 in the title was lost as well.

Plunging down the hill with five laps to go, the fight for fifth saw Crutchlow run very wide. The British rider was almost in Lisbon and dropped to P9, just ahead of Aleix Espargaro (Aprilia Racing Team Gresini). 7.6 seconds up the road, Miller was back on the tailpipes of Morbidelli, Oliveira was still over four seconds clear and soaring to an unbelievably famous victory on home soil.

Three laps to go. Miller had been following Morbidelli for two races and could probably write a book on the Italian’s riding style by now. But still, the number 43 couldn’t get close enough to pounce. Nakagami was picking up some great late-race pace, the Honda man was just over a second behind Pol Espargaro.

Onto the last lap of the season we went and Oliveira had an easy – relatively speaking – run to victory. One of the rides of the season? You bet. Miller was close, very close, to Morbidelli and the move came at Turn 13! Miller was through and held it into Turn 14 but ahead, Portugal’s Miguel Oliveira was a winner on home soil. Picture perfect in Portimao for Oliveira and Tech3, a simply stunning victory and a second of the season – what a fine way to end the 2020 season and that’s now three wins for KTM this year.

His last-lap move on Morbidelli handed Miller P2 in Portimao, a result that hands Ducati the Constructor Championship for the first time since 2007. Miller’s fourth podium of the season was hard-earned and it was another fascinating fight between himself and Morbidelli. The latter may have lost P2 on the last lap in Portimao, but he is the 2020 MotoGP™ World Championship runner-up. Five podiums, three of them wins, signals a sensational year for the Italian – top Yamaha rider in the Championship is Morbidelli.

P4 for Pol Espargaro isn’t the podium or victory that he would have wanted in his KTM swansong, but another great rider sees the number 44 finish 5th in the World Championship. An amazing achievement from Pol, KTM and the whole team in 2020 as the Spaniard now says his goodbyes and heads for Honda. Nakagami bounces back from two crashes this weekend to finish the season on a high with his fourth top five, a strong campaign for the Japanese rider.

Dovizioso had a sterling final half of the race to earn P6 in his final race for Ducati. The Italian ends 2020 P4 in the standings before his 2021 sabbatical, it’s not the podium he’ll have been hoping for but a positive way to end his Bologna career. Bradl’s weekend in Portimao was insanely good, a crash in Warm Up was the only mistake he made across the three days. P7 for the HRC test rider beats his Le Mans P8 from this year as Marc Marquez’ replacement does the eight-time World Champion proud in the season finale.

Aleix Espargaro was another who had awesome late-race pace, the Aprilia man secures his third top 10 of the year with a great effort on the Algarve coast. Alex Marquez’ impressive rookie year ends with a P9 in Portimao, not quite enough to beat Brad Binder (Red Bull KTM Factory Racing) to the Rookie of the Year crown but, nevertheless, the number 73 has announced himself as a proper MotoGP™ contender in 2020. Zarco crossed the line in P10 ahead of his switch from Esponsorama Ducati to Pramac Ducati, the Frenchman finishes ahead of factory Yamaha duo Viñales and Rossi.

Unfortunately for the Iwata factory, 2020 wasn’t the year they’d have hoped for after their Jerez success. Viñales finishes sixth in the standings, with Rossi’s final factory Yamaha race ending with a P12 in Portimao. The pair edged out Crutchlow as the British rider bows out of full-time racing with a 13th place, a fantastic career comes to an end for the number 35 who gets ready for a Yamaha test rider role in 2021.

Quartararo was icing his arm at the end of another difficult race, the Frenchman finishing P14 in Portimao and that’s a result that sees El Diablo settle for P8 in the overall standings. Rins slipped right back in the latter stages and takes the final point of 2020, a disappointing end to a great season for the Spaniard who takes the 2020 bronze medal.

Danilo Petrucci (Ducati Team) waves goodbye to Ducati with a P16, Mika Kallio (Red Bull KTM Tech3) and Tito Rabat (Esponsorama Racing) were the two other finishers in Portimao as Rabat also – potentially – wraps up his MotoGP™ career. Lorenzo Savadori (Aprilia Racing Team Gresini) and Rookie of the Year Binder crashed out, Francesco Bagnaia (Pramac Racing) was forced to retire on Lap 1 after suffering what looks like a shoulder injury. Contact with Mir at Turn 3 saw the Italian in considerable pain back in the garage.

And so, the curtains are drawn on an incredible 2020 MotoGP™ World Championship season.