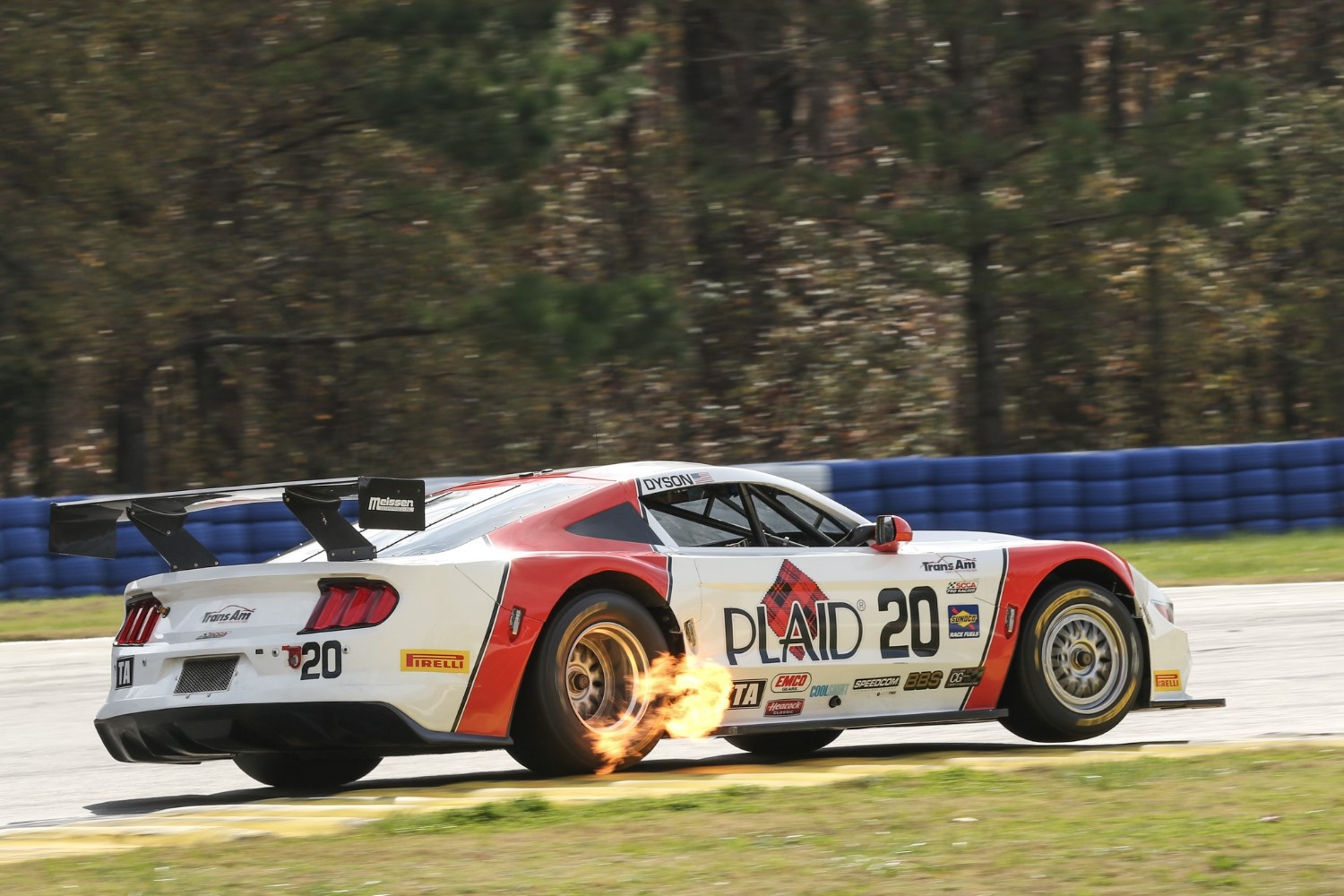 Chris Dyson shook off a season of frustration Sunday at Michelin Raceway Road Atlanta, leading all the way to capture the 2020 Trans Am Series presented by Pirelli combined five-class finale with a flag-to-flag victory.

The Championship weekend saw two days of racing, with Sunday’s 100-mile feature integrating all five classes of Trans Am competition into one thrilling event on the high-speed 2.54-mile circuit north of Atlanta.

The New Yorker led the opening 12 laps on Saturday, only to have a belt break and end his day early. Sunday, he was not to be denied. Dyson pulled away from Saturday winner Martin Ragginger at the start and held off numerous challenges. The Austrian kept the gap within one second for most of the 40-lap race, but Dyson finished strong, winning by 2.239-seconds for his second victory of the year.

“It’s been a tough year, but it’s nice to close it out this way,” said Dyson, who won the 2019 finale at Daytona. “We had to play every trick in my experience book today. It was really hard racing. Martin was on me the whole way, and I had to use every tool in the kit today with all the traffic out there. He was keeping me honest, but after yesterday, it sure feels good to go home with a win under our belt.” 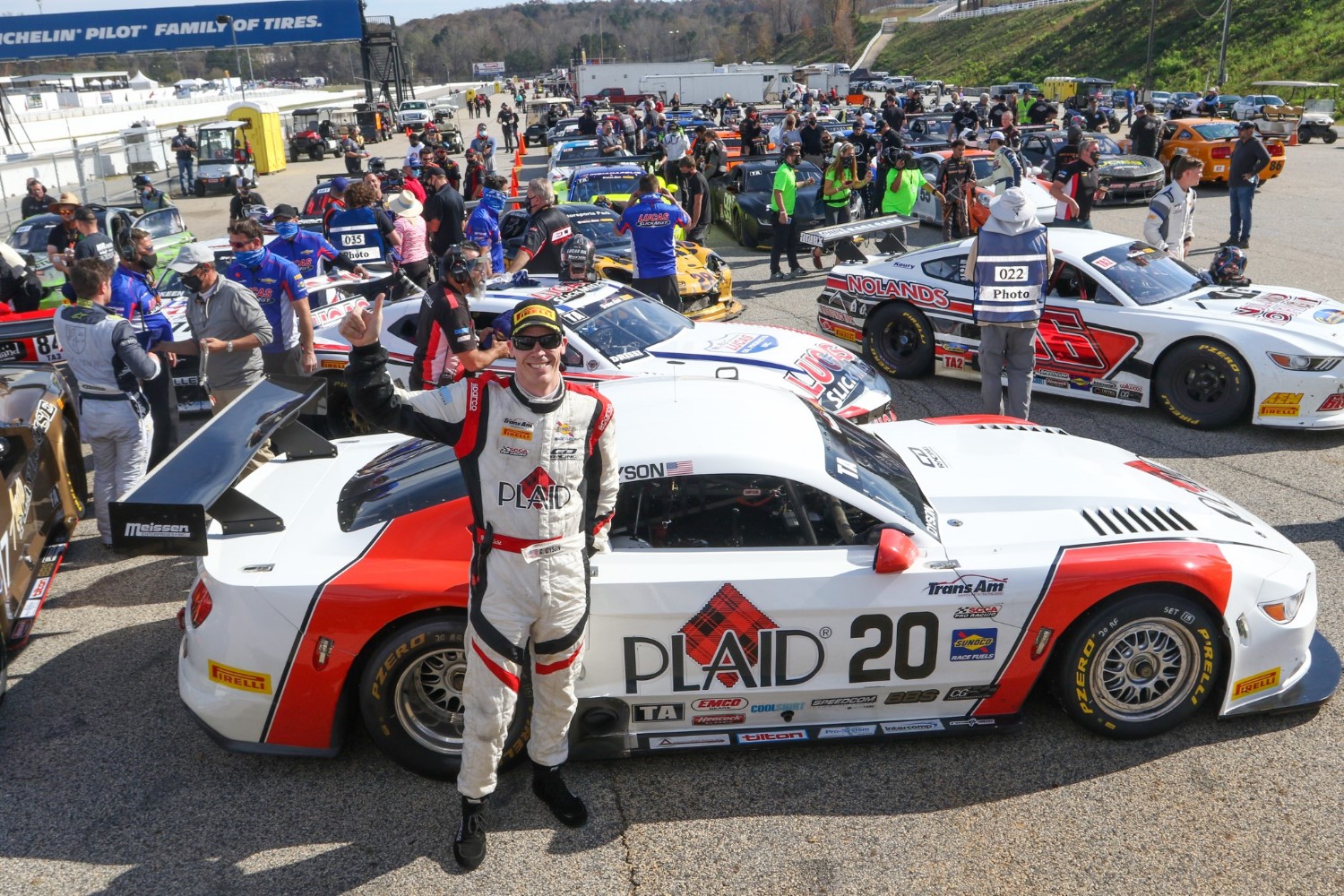 Ragginger finished second in  the No. 17 Gin Amade Chevrolet Camaro, and was followed across the line by his Burtin Racing teammate Tomy Drissi in the No. 8 Lucas Oil Camaro.

Francis Jr. turned around a troublesome weekend, coming from 10th to briefly hold third before losing the podium position to title hopeful Drissi. Francis Jr. beat out Drissi by 29 points in the championship standings, which will become official with the posting of official results on Wednesday.

“It was a really tough race, coming from the back,” said Francis. “Once we took the green flag we had the championship locked up. That took some pressure off of us, so we could race and have some fun out there. I was battling for the podium, but didn’t have quite enough car for that today. Maybe we’ll be back next year and take another championship.” 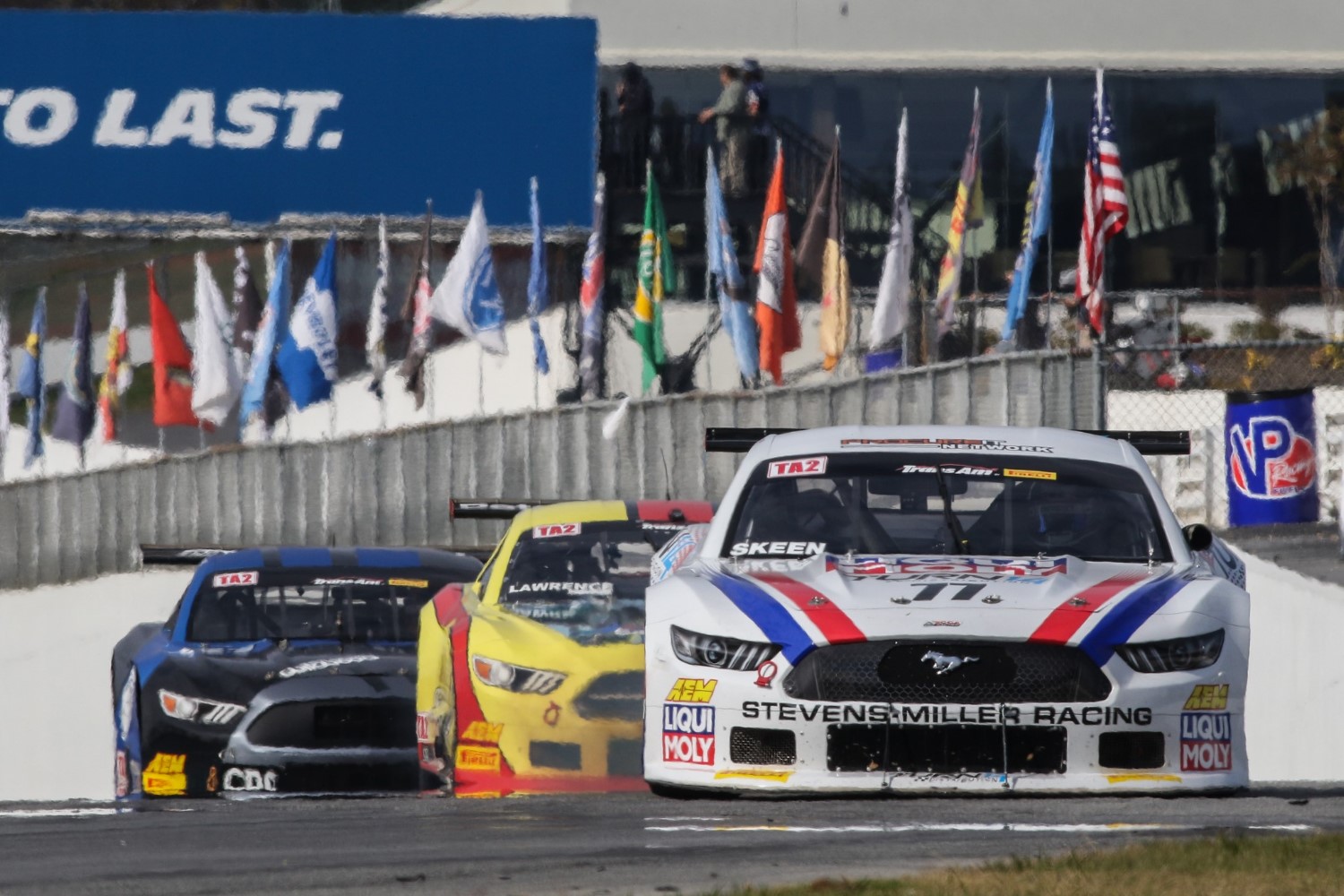 Boris Said spun in Turn 1 on the opening lap on cold tires, but came back through the field to place fourth in the No. 2 Weaver Racing Dodge Challenger. He was followed by Justin Marks in the No. 99 Trackhouse Chevrolet, Amy Ruman in the No. 23 McNichols Corvette and Simon Gregg in the No. 59 Derhaag Camaro.

The race had two caution periods, the first on lap 10 for the stopped fifth-place No. 10 BC Race Cars Camaro of Misha Goikhberg and a second on lap 28 for the stopped No. 16 Madison Development Mustang of Jim Gallaugher.

With full field of multi-class competition, the ensuring restarts were thrilling to the fans on hand as well as those watching the stream via the Trans Am by Pirelli Racing App.

The 43-car battle featured changes in the podium finishers in three of the four competing classes in the final four laps.

Mike Skeen put a bow on his TA2® powered by AEM championship with his second victory of the weekend in the No. 77 Liqui Moly/Turn 14 Ford Mustang.

“I know that it sounds like a broken record but I am really appreciative of Stevens-Miller Racing,” said Skeen. “They work really hard. We had a little bit of a worry after yesterday’s race and thought about not racing today to save the car. Then we decided why not, let’s go for it again. They gave me a great car. The Liqui Moly Turn 14 Distribution Mustang was on fire as usual. I had a great battle there at the start, (Thomas) Merrill was in the mix Franklin (Futrelle) was right there. We were fortunate to clear traffic and stretch our legs a little bit there at the end. It was a heck of a battle. TA2 racing is awesome. I can’t wait to do some more of it.”

Cameron Lawrence managed to poke the No. 8 3-Dimensional Camaro out front for a few laps, but Skeen was not to be denied. Lawrence finished second in class.

“It was a very exciting race, and it was good to lead some laps,” Lawrence said. “I had a good car the first half of the race, and I lost the rear tires towards the end. We tried to deal with Mike the best we could and sort through the traffic, and had another second-place finish.”

Seventeen-year-old Jett Noland wrapped up Rookie of the Year honors with his first-career podium finish in the No. 66 Nolands Roofing/Cypress Hunt Ford Mustang. The run also earned Noland the Cool Shirt Cool Move of the Race.

“I loved my first year in Trans Am, and hopefully, I will come back next year and do the same,” said Noland. “This has a stock car kind of feel, and that’s the kind of racing I come from. My end goal is to make it to NASCAR.”

Noland was followed by Keith Prociuk in the No. 9x HP Tuners/Mike Cope Race Cars Mustang, and J.P. Southern Jr., who wrapped up the Southern Cup title in the No. 61 pitrace.com Camaro.

Franklin Futrelle had another impressive run in the No. 58 Meco of Augusta/Greenville Mustang. He was in line for a podium when he pulled off with a cut tire with only two laps remaining. Also falling back in the closing laps was Rafa Matos, who placed 10th in the No. 7 Silver Hare Racing Camaro. Thomas Merrill ran second before a spin, and lost power while running fourth with seven laps remaining in the No. 81 Diehl-Merrill Racing/HPTuners Mustang.

SGT had a change of leadership with two laps remaining when Justin Oakes came to the pits with a broken rear suspension after leading all the way in the No. 11 Droneworks Corvette. That gave the lead to Mark Brummond, who claimed his second victory of the season in the No. 11 Garage Door Doctor BMW M4 GT4. Adrian Wlostowski took second in the No. 96 F.A.S.T. Ford Mustang, but unofficially fell short in the battle for the championship to third-place finisher Lee Saunders in the No. 84 Landsearch LLC Dodge Viper.

“We bought this car four months ago, and we wanted an affordable series to race in,” Brummond said. “Five races, four podiums, two wins – that’s pretty good for us. (Oakes) had more motor than me, but we just stayed steady and muscled through it. We’ll be back next year.”

It was a come-from-behind race for Wlostowski.

“I had to check up at the start, spun the car and had to start from the back,” Wlostowski said. “I had a hard fight to second, and a good race to end the season. The crew worked all night to change the clutch.”

Saunders’ crew also had a long night, changing the rear end of his Viper.

“I think that was enough [for the championship],” Saunders said. “A bunch of guys came up from Lakeland to help us the last two days, and I think they swapped out everything but the driver. “It’s a heartbreak for Adrian, he’s a fantastic competitor.”

Billy Griffin wrapped up the GT season with his fourth victory, leading all the way in the No. 14 Griffin Auto Care/Sheehan’s Towing Ford Mustang. Griffin missed three races early in the season before scoring a career-first triumph in his return at Virginia International Raceway. The West Palm Beach, FL driver won the final three rounds of the season.

“It was wild, very eventful,” Griffin said. “I was in my mirrors the whole time, keeping an eye on the fast cars getting through their race. Surprisingly, I didn’t get hit once.”

John Baucom finished second in his first weekend in GT, driving the No. 86 RoadRaceParts.com Ford Mustang.

After unofficially clinching the inaugural XGT championship with his fourth victory of the season, Ken Thwaits did not compete in Sunday’s race. Josh Hill, his lone competition in the class, withdrew after sustaining left-front damage on his No. 15 Audi R8 LMS Ultra in an incident during Thursday’s test day.

Fans are welcome to see the 2020 champions officially crowned at the Trans Am Series presented by Pirelli awards night. This year’s celebration will be held virtually in early December. Details on how to witness the ceremony will be announced in the upcoming days.

Results are not official