Vasser Sullivan Racing announced today the championship contending duo of Jack Hawksworth and Aaron Telitz will return to the team as it sets its sights on the 2021 IMSA WeatherTech SportsCar Championship.

The team also confirmed they will continue to field two full-season Lexus RC F GT3 entries for the 2021 season. The No. 14 Vasser Sullivan Lexus RC F GT3 car will be driven by Hawksworth and Telitz for all GTD class rounds.

Announcements regarding additional drivers for the Rolex 24 at Daytona, Michelin Endurance Cup and No. 12 entry are expected to be forthcoming.

Hawksworth, 29, from Bradford, England, will be contesting his third IMSA season with the team, fifth with Lexus and eighth overall in 2021. He has five IMSA GTD class wins, two in 2019, three in 2020 and six overall (won the Brickyard Grand Prix in the Prototype Challenge class at Indianapolis Motor Speedway).

Telitz, 28, a native of Wisconsin, will be starting his third IMSA season for a Vasser Sullivan owned team. He ran the 2019 IMSA Michelin Endurance Cup, before becoming a full-time driver of the No. 14 AVS Lexus entry in 2020 where he and Hawksworth scored three wins. 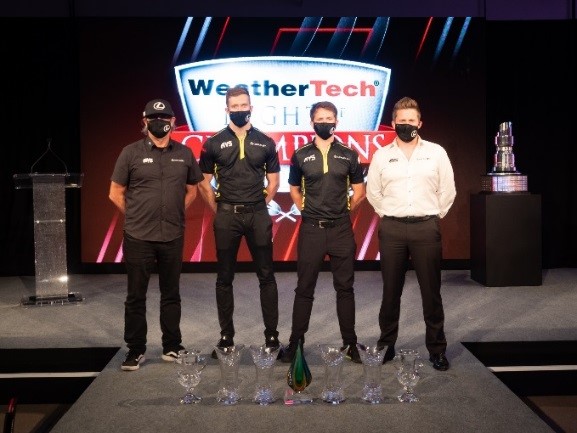 “We have not been shy about our attack on the IMSA GTD championship for 2021. Securing both Hawksworth and Telitz in the No. 14 Vasser Sullivan Lexus entry is the first of a few dominoes to fall as we prepare our assault on this championship. We couldn’t be more energized for what’s to come. Additionally, a big thank you to Andrew (Bordin), Ian and Keith (Willis) for their work and partnership over the last two seasons.”

“I am delighted to be continuing into 2021 with Vasser Sullivan Racing and Lexus. To be paired again with Aaron is a perfect scenario. After three wins together in 2020 and the sprint championship title, we can only have one goal and that is to secure the 2021 IMSA GTD Championship title.

“There have been some changes over the off-season and the relocation of the team to Charlotte gives a new opportunity for growth and continued improvement heading into 2021. Kaizen is a philosophy that everybody at Lexus embraces and this is the mindset we’ll be carrying forward into 2021 in pursuit of the top step of the podium.”

“It’s an honor to return to the Vasser Sullivan Lexus team in 2021 and make a full attack at the championship. I’m ready to build on my first full-season of IMSA GTD competition with Jack and take our Lexus RCF GT3 back into the championship fight. The team that is being assembled will be a serious force. Thank you to Jimmy and Sulli for their continued faith in me as well as my long time sponsor Rice Lake Weighing Systems for continuing for the 2021 season.”

“We are excited to have Vasser Sullivan running the 12 and 14 Lexus RC F GT3s next season. We believe the Vasser Sullivan driver lineup is among the strongest in the GTD paddock and we’re poised to make a championship run. We’re thankful for every team member who has helped bring the Lexus RC F GT3 to where it is today and anxious to see what the 2021 season brings.”