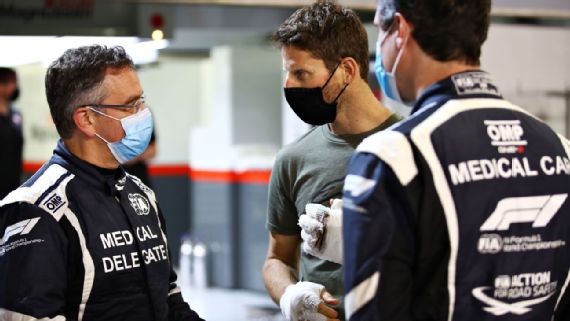 Romain Grosjean has returned to the Formula One paddock for the first time since his fiery accident at the Bahrain Grand Prix last Sunday.

Grosjean’s car split in two and was engulfed in flames when it hit a barrier on the opening lap of Sunday’s race. It took 28 seconds for the 34-year-old to escape the wreckage before being helped to safety by Dr Ian Roberts, who arrived on the scene in the FIA medical car.

On Thursday, he returned to the paddock to spend time with his team and meet with Dr. Roberts and the medical car driver Alan van der Merwe, who were among the first people to arrive at the scene of the accident.

He also posed for photos with track marshals and the FIA’s race director, Michael Masi.