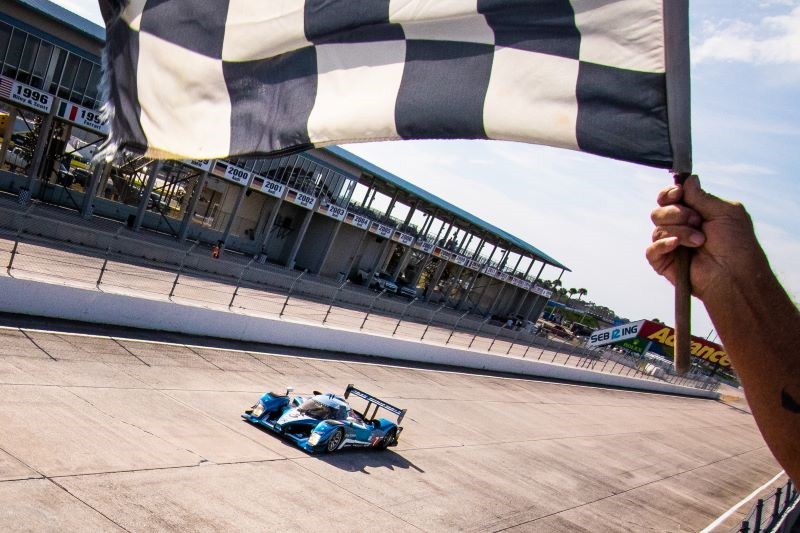 Competitors in the HSR Classic Sebring 12 Hour were divided into four period-correct Run Groups with each taking to the 3.74-mile Sebring circuit four different times for 42-minute race segments over the last two days. Each overall Run Group winner was presented with a special-edition B.R.M. Chronographes watch commissioned specifically for the HSR Classic Sebring 12 Hour.

An American who is a multiple champion in FIA Masters Historic Formula One competition in Europe, Delane has only recently started historic sports car endurance racing in the U.S. Prior to his breakout solo drive to victory this weekend in the HSR Classic Sebring, Delane has previously competed three times in the HSR Classic Daytona 24 Hour race. 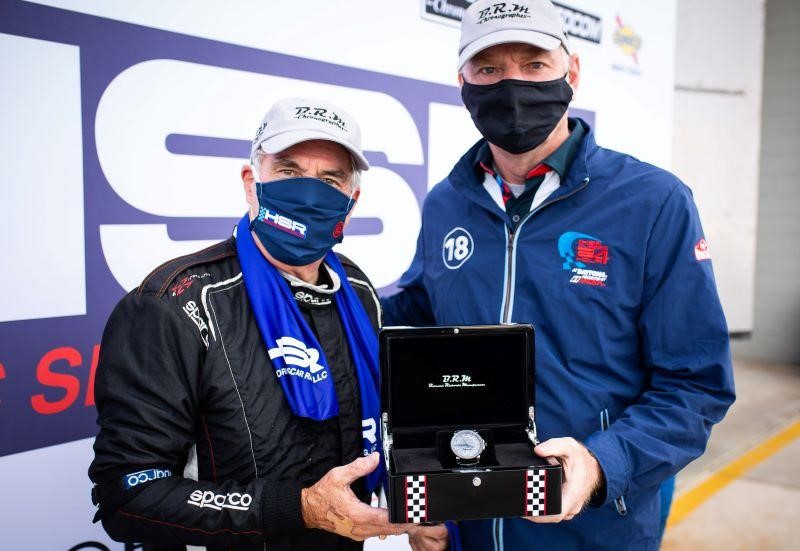 While Delane won in a Chevron in his Sebring debut, the winning Run Group B trio of Gray Gregory, Randy Buck and Ethan Shippert co-drove a Chevron to a third-consecutive HSR Classic Sebring victory.

The “threepeat” came after a dominating performance by the Phil Reilly and Co. 1974 No. 26 Chevron B26 drivers and team that began with car-owner Gregory winning Group B Round 1 by more than a minute Saturday afternoon. Buck and Shippert, respectively, swept the next two segments while Gregory and Shippert co-drove to a competitive but cautious second-place finish in Sunday’s fourth and final round to secure the victory.

The third-straight Sebring win is also the fourth overall HSR Classics victory for the No. 26 Chevron B26 team in recent years. Gregory and Shippert co-drove to the Group B win at last month’s HSR Classic Daytona 24 Hour race.

Run Group C was home to another repeat winner, with David Porter scoring his second-straight HSR Classic Sebring win in his GMT Racing 2007 No. 7 Peugeot 908 HDi FAP (pictured at top) despite some tough competition.

Porter scored the victory in Group C’s opening segment by more than a minute but then trailed the quick Olthoff Racing 2007 No. 25 Oreca FLM09, co-driven by Larry Huang and Peter Dannan, to the line in Rounds 2 and 3. 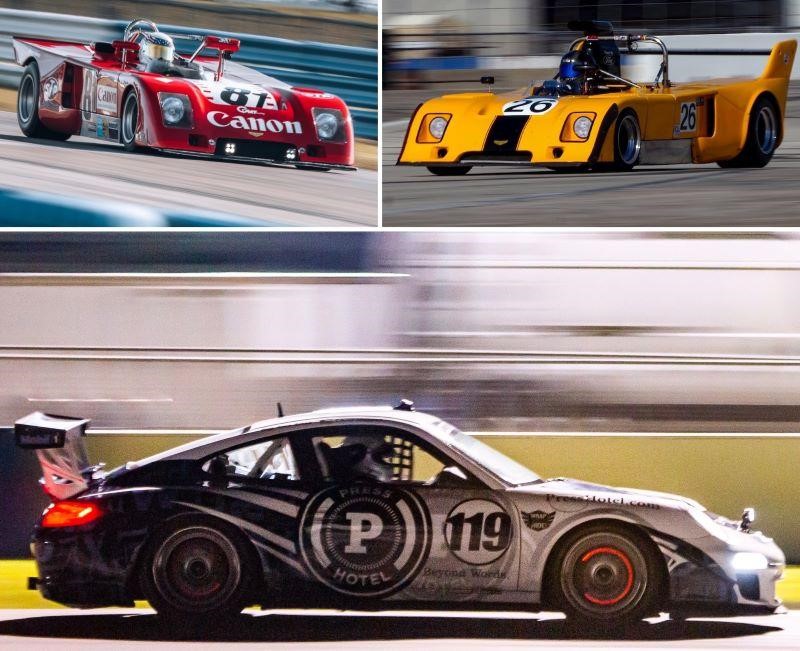 Leaving nothing to chance, Porter promptly went out and won the fourth and final Group C segment to wrap up the overall victory. The Porter and Peugeot pairing is now a perfect four-for-four in HSR Classics competition, including the Classic Sebring wins and triumphs at the HSR Classic Daytona last month and in the Peugeot’s HSR debut at Daytona in 2019.

The Run Group D victory went to first-time HSR Classic Sebring winners Chris Ruppel and Eric Zitza who avenged a narrow loss in the division last year in the 2010 No. 119 Porsche 997 GT3 Cup from Zotz Racing.

Ruppel and Zitza co-drove to their only segment win in Saturday’s opening race but coupled a calculated drive with some key pit-side strategy from the Zotz crew to build an untouchable lead over the course of the remaining three segments.

Next up for HSR is a return to Sebring International Raceway for 2021’s season-opening HSR Spring Fling at Sebring, March 31 – April 2. Next year’s Spring Fling dates have been slightly adjusted with a Wednesday through Friday format allowing competitors to be home for the Easter Weekend Holiday.

– Quick and well-prepared Porsche 911 competitors raced to overall podium showings in Run Groups A and B. Dawn Myers scored a solid third-place finish in Group A in her 1969 No. 52 Porsche 911 prepared by the 901 Shop. Damon DeSantis and David Hinton in turn co-drove the Heritage Motorsports 1974 No. 82 Porsche 911 to third in Group B. Myers finished behind only Delane’s Chevron and the second-place GMT Racing 1962 No. 1 Lotus 23B of Travis Engen, out-pacing four other production-based Porsches and several pure-bred race cars. DeSantis and Hinton topped a competitive field of six similar Porsche 911 models. 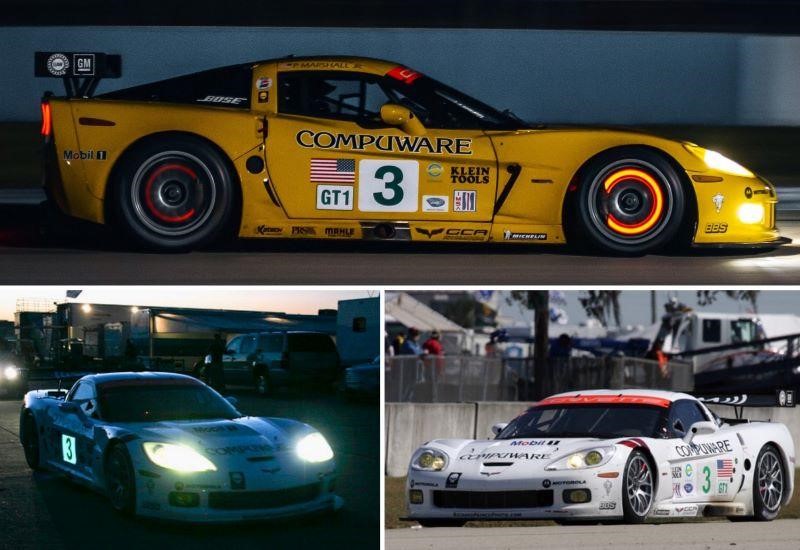 – Pierce Marshall, co-driver Eric Foss and Matador Motorsports brought the 2006 No. 3 Corvette C6.R that won the GT1-class pole for the 2007 Sebring 12 Hour back to the track this weekend for the team’s first race with the recently restored car. Marshall swept both of his HSR WeatherTech Sprint races in the familiar No. 3 Corvette that proved popular with fans and friends at the event and tracking the action from afar. Motorsports photographer and author Nigel Dobbie, who wrote the book “Corvette Racing – The GT1 Years,” emailed a behind-the-scenes account of a rare livery change the No. 3 went through during the 2007 Sebring weekend.

– “I remember the car practiced and qualified in yellow as normal, but I was walking through the paddock just before dawn on race day as the No. 3 came rumbling past, and I was astonished to see it was white,” Dobbie said. “The team had prepared a second set of all white removable panels back at the shop, which had been stored out of sight from the drivers. This included the doors, fenders and hood, but the roof and other parts of the car had to be sprayed in a temporary paint booth at the track on Friday night after the drivers had left for the evening. From memory, I think the crew got it done about 3 a.m. and then had about three hours sleep before having to be back at the track ready for the 16-hour day ahead of them for the 12-hour race!”

– The Arctic White livery paid tribute to team driver Ron Fellows, who was wrapping up his accomplished driving career, and saluted the limited-edition Ron Fellows ALMS GT1 Champion Corvette Z06 street car, which was the first signed special edition in Corvette’s then 54-year history. Marshall owns No. 48 of the limited run of 399 Fellows edition Z06 Corvettes.