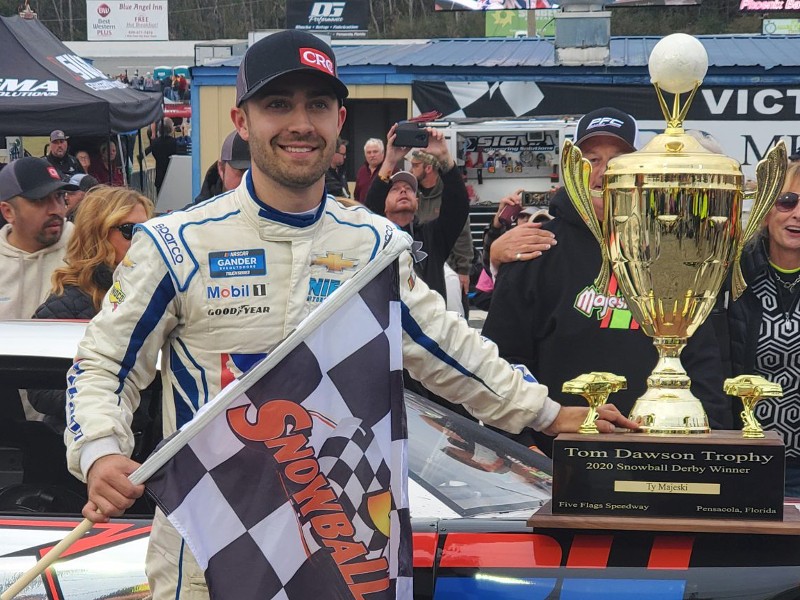 26-year-old Wisconsin native driver Ty Majeski felt a little bit snake bitten in the Florida Panhandle. He lost the lead 26 laps shy of the checkered flag in his 2018 second-place finish. Exactly four years ago, Majeski lost the lead on Lap 287 and finished third for the second year in a row.

Majeski, a NASCAR Trucks Series driver and Super Late Model virtuoso, led the race on the final restart with California SLM stud Derek Thorn on his outside. Thorn, the Derby polesitter for the second consecutive year, had a rocket for most of the race and led a Derby-record 252 of 302 laps.

The pair were beating and banging on each other for most of the final five laps, but Majeski stuck his No. 91 SLM in front of Thorn’s No 43 on Lap 299 and held Thorn off for the final three laps to earn his first career Derby victory.

“This is the one everybody wants, and we’ve given a couple away, so it means a lot,” Majeski said. “It means a lot. We’ve had the dominant racecar in the past but couldn’t close it out. We weren’t great today, but we were when it counted. We made the right adjustments all day.”

Chase Elliott and fourth-place Chandler Smith were the moving men Sunday after starting 31st and 34th, respectively. Each earned their way into the show during a tense Saturday in which Elliott won the last-chance race and Smith finished fourth then, as well.

Smith’s fourth is his best career Derby finish on a glowing resume. The 18-year-old from Talking Rock, Ga., has finished no worse than seventh in five consecutive and career starts.