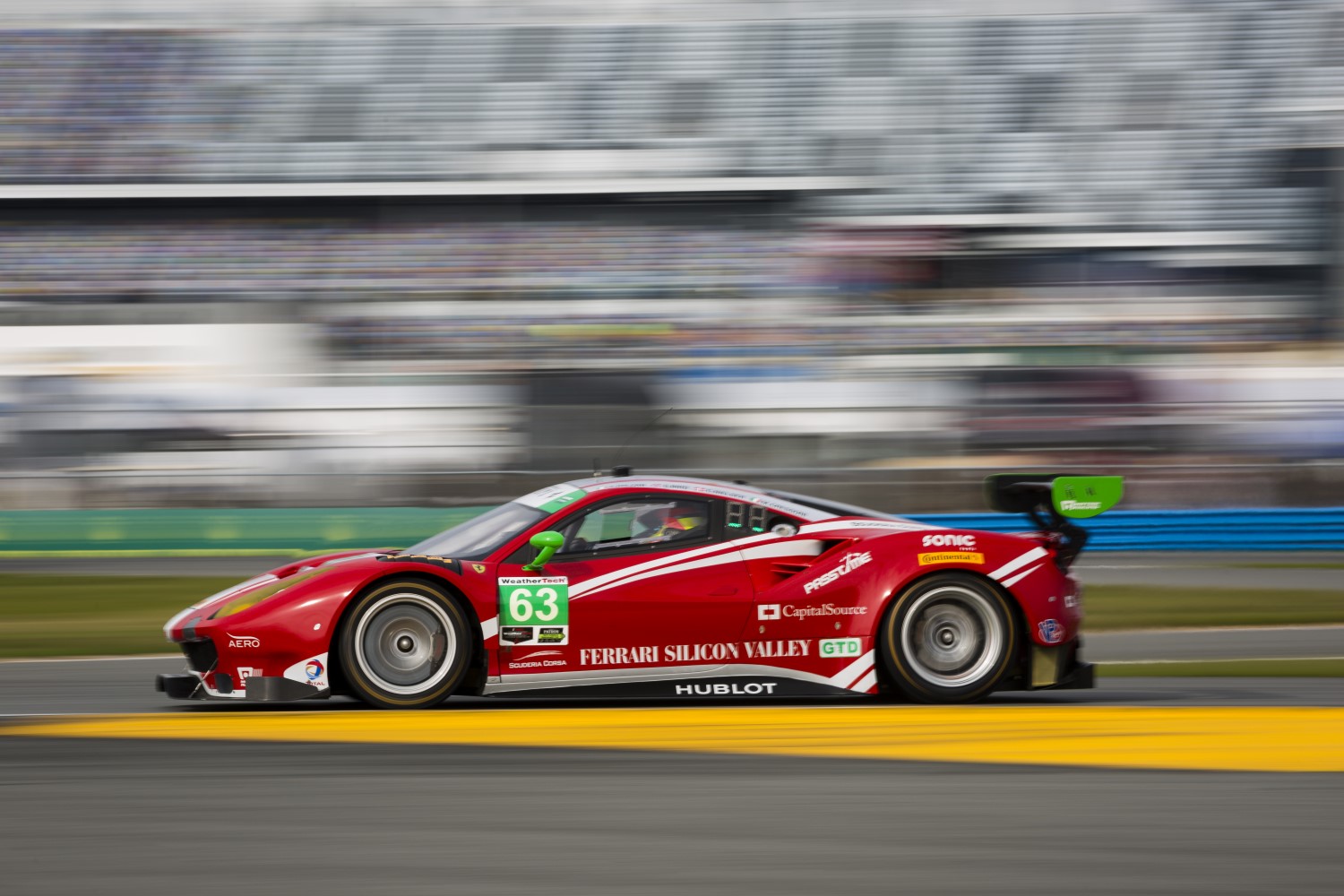 Scuderia Corsa adds a heavyweight entry to the GT Daytona Class amongst the growing list of teams participating in the IMSA WeatherTech SportsCar Championship at the Rolex 24 At Daytona. The No. 63 Ferrari 488 is partnered with TOTAL, Aero and Pacific Western Bank for the kickoff to the 2021 racing season.

Scuderia Corsa has many highlights across the various forms of racing it has contested and the No. 63 entry showcases a merging of such success. Brett Curtis is a veteran Scuderia Corsa driver running at the 24 Hours of Le Mans and in the SRO GT World Challenge series with the team. Ed Jones carried the banner for Scuderia Corsa in the NTT IndyCar series in 2019, notably gaining traction for his Row Two start at the Indianapolis 500.

Driver Marcos Gomes joins the team for another attempt to win a Rolex at Daytona International Speedway. Gomes previously competed in the Rolex 24 in 2014 and 2015 with a Scuderia Corsa supported Via Italian Racing Ferrari and ran with Via Italian Racing again in 2019. In that same run, he earned the pole position in the GTD Class in a magnificent effort followed by the fastest lap of the race.

A high-profile name in the lineup is IMSA WeatherTech SportsCar Championship DPi vice-champion Ryan Briscoe. He is the 2020 winner of the Rolex 24 At Daytona in the Daytona Prototype Class. He also took home the win in DPi at Petit Le Mans this past race season. Briscoe has raced across multiple series and classes in both sportscar racing and open-wheel always finding success. He may have tasted victory at Daytona, but one can never have enough Rolex watches.

Scuderia Corsa won IMSA WeatherTech SportsCar Championship GTD championships in 2015, 2016 and 2017. Prior the team took home championships in 2013 with the Grand-Am Rolex series. Since then, it added prominent victories to its resume including the 24 Hours of Le Mans, Twelve Hours of Sebring, Six Hours of The Glen and two wins at Petit Le Mans. However, a podium at the Rolex 24 At Daytona has alluded Scuderia Corsa.

For Briscoe, GTD presents a new class and a new car but he’s ever ready to rise to the occasion.

“I’d like to thank Giacomo for the opportunity to join Scuderia Corsa for this coming Rolex 24 at Daytona,” Briscoe said. “This will be a new challenge for me racing in the GTD class in a Ferrari. I’m very grateful and will do my part to fight for the victory and can’t wait to hit the track in a few weeks! Happy Holidays and I wish everyone a safe and successful 2021.”

For Curtis, he’s most excited to go endurance racing with a team that has clout.

“I am very excited to be back with Scuderia Corsa to race the Daytona 24 hour,” Curtis said. “Scuderia Corsa always runs a strong team, and I am really happy to have the chance to be teamed up with some very talented drivers in Ryan, Ed, and Marcos. The 24-hour races are always a tremendous challenge, but we have the best tools to get the job done. I can’t wait to get to work.”

“First, it’s great to be back with Scuderia Corsa because I have a great relationship with the team and everyone there,” Jones said. “I look forward to going back stateside after a rough 2020 for everyone. I think we have the chance to start 2021 off the right way with a great result at Daytona. I think the team we have around us as well as drivers is a strong lineup. It should be the perfect opportunity to get a great result. The goal as always is to win. I think if we show the performance that Scuderia Corsa had last year, we can certainly be in a position to achieve.”

For Gomes, his return to the Rolex 24 At Daytona was prompted by the car and team.

“The expectation is to fight for the victory,” Gomes said. “We have a strong lineup of drivers and Scuderia Corsa is one of the most experienced teams in the GTD Class. Furthermore, the Ferrari 488 has always been very competitive at the Daytona 24.”

For Team Owner Giacomo Mattioli his passion for competition has him thrilled to see this entry.

“I truly believe this lineup has a chance to win,” Mattioli said. “They have the experience, the speed and the enthusiasm to succeed. This race picks its winner, but you do have to prepare. The team has been working all offseason for the return to racing. Our partners TOTAL, Aero and Pacific Western are all excited to be back at Daytona. 2021 feels hopeful and we want to capitalize on the positive momentum.”

The ROAR Before the 24 kicks off the IMSA WeatherTech SportsCar Championship season Jan. 22-24, 2021. This year a one hour and 40-minute sprint race will be held to set the qualifying position of the field for the Rolex 24 At Daytona. The endurance classic goes green Saturday, Jan. 30 at 3:40 p.m. ET. For schedule details and the 2021 IMSA calendar visit http://imsa.com