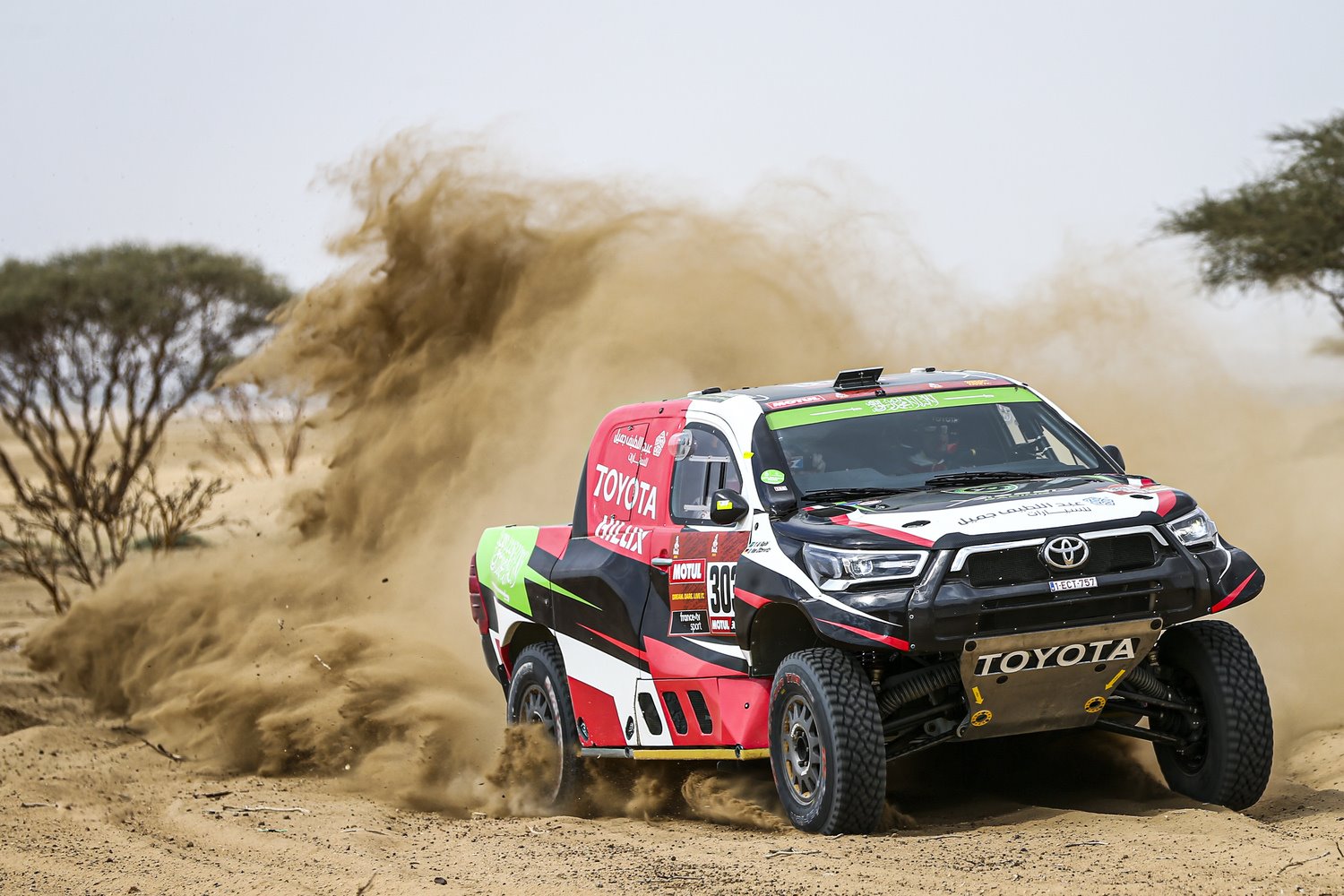 TOYOTA GAZOO Racing is looking forward to challenge for the Dakar Rally title again despite a truncated year which limited the team’s training and testing as a result of the global pandemic.

Nevertheless, in challenging circumstances, the team worked throughout the year, within the health and safety protocols to develop the new Hilux. In a late decision, the team decided to take part in the Baja Ha’il double-header, the final rounds of the FIA World Cup for Cross-Country Bajas, with Nasser Al-Attiyah and Mathieu Baumel for an unconventional shakedown of the new Hilux. Nasser showed his determination to win the first round after a tough battle with Carlos Sainz, resulting in very close racing which saw the Hilux trade paint with the competition. Nasser narrowly missed out on victory in the second round due to a penalty that was levied post-race, and had to concede the World Cup title.

Despite only having raced in two international events before the 2021 Dakar Rally, the new Hilux has already proven its speed and reliability. The latest evolution of the Dakar-proven Hilux is a further development of the car that won the race in 2019, with refinements to many parts of the car. The suspension has been comprehensively re-tuned, while a new exhaust system has brought an improvement in the low-down torque curve of the naturally aspirated V8 engine from the Lexus RC-F.

Due to the daily battle with tire deflation throughout the 2020 edition of the Dakar Rally, TOYOTA GAZOO Racing has worked with Toyota Motor Corporation and GAZOO Racing Company to adapt a new tire pressure monitoring system from the recently launched GR Yaris for the Hilux. This is an unusual role reversal where road car tech is being transferred back to rally cars, but is then expected to be tested to the limits in the white heat of competition. TGR Dakar Team also worked with partners at Motul to adapt the electronics and programming to ensure the new monitoring system works well with the Hilux.

The 2021 Dakar Rally will see TOYOTA GAZOO Racing field four cars, with a mix of experienced and relative newcomers to the sport. The team will again be spearheaded by 2019 winners Nasser and Mathieu, while Giniel de Villiers and navigator Alex Haro will be sure to mount a strong challenge for the title. New to the team is double South African cross-country champion Henk Lategan and his navigator Brett Cummings. The latter finished second in the testing Malle Moto category for motorcycles in 2014, and will be looking forward to returning to the rally. The team also includes former South African champion Shameer Variawa, who will be taking on his second Dakar Rally. He will have multiple South African champion navigator Dennis Murphy beside him in the car.

The 2021 edition of the Dakar Rally will again take place solely in Saudi Arabia, with crews setting off from the city of Jeddah on January 3. This year the route will follow an anti-clockwise direction, starting in Jeddah before heading south towards Bisha. From there, the rally will complete a stage at Wadi Ad-Dawasir, and then swing to the northeast for a one-night visit to the Saudi capital of Riyadh. Two more stages follow before the Rest Day in the city of Ha’il on January 9, signalling the start of the second half of the rally. Competitors will head north to Sakaka, before swinging westwards to the future city of Neom for two stages. Finally, the rally turns southwards via Al Ula and Yanbu, before reaching the finish in Jeddah on January 15.

Glyn Hall, Team Principal: “The 2021 edition of the Dakar Rally is more than just another race. In the turmoil of 2020 and the ongoing COVID-19 pandemic, the rally seemed at times as if it would never happen. Even so, we continued to work on the development of our Hilux with our eyes on taking on the challenge, despite a lack of international rallies. Now, just a day away from the start of the event, we are extremely proud to be here, and we are confident that our car is ready to challenge for the title again for TOYOTA GAZOO Racing. Recent comments by our main competition, Carlos Sainz, was highly encouraging. He rated our Hilux as strong competition, and we will continue to push ourselves and our Hilux to the limits, in order to put up a good fight.”

Nasser Al-Attiyah (No. 204): “I know that the team faced many challenges to develop and prepare the cars for Dakar 2021. Even getting here was difficult. But we saw in Ha’il that the Hilux is really fast, and as reliable as ever. So, I am looking forward to the race, and will be doing my best to recapture the title for TOYOTA GAZOO Racing.”

Giniel de Villiers: : “Saudi Arabia proved to be a worthy host country for the Dakar in 2020, and it quickly became clear that winning here would not be easy. We’ve worked hard to prepare our car for the upcoming race, taking into account the lessons we learned last time. I’m confident that we have a great car, and I’ll be pushing for a good result for TOYOTA GAZOO Racing.”

Henk Lategan: “I have a mix of emotions, as the start of Dakar draws closer. On the one hand, I’m nervous about taking on the world’s toughest race; on the other, I know the Hilux is extremely capable and reliable. I really want to get going now, and see if I can translate the speed we’ve developed in the South African championship to the stages of the Dakar Rally with TOYOTA GAZOO Racing.”

Shameer Variawa: “The latest version of the Hilux has proven to be an extremely fast and highly reliable car. I can’t wait to take on the dunes of Saudi Arabia for the first time with TOYOTA GAZOO Racing, as my last Dakar was in South America. I’ve been fortunate to race the Hilux for some time now, and I’m confident of the car’s capabilities in any conditions. Now I just need to get the first stage behind me.”