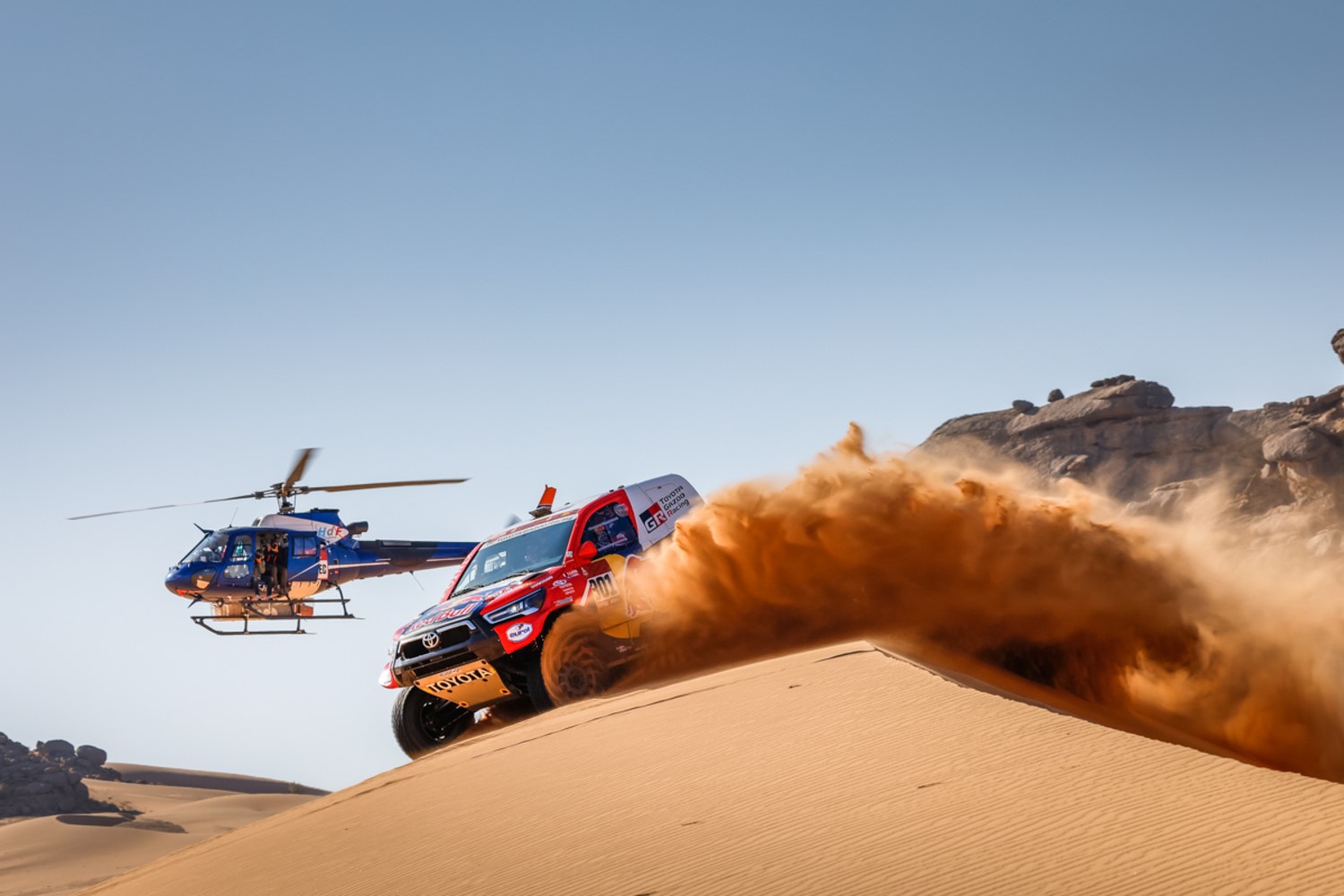 Stage 3 of the 43rd Dakar Rally ongoing in Saudi Arabia has come to an end.  After wins on the prologue and stage two, Nasser Al-Attiyah has also tasted victory on the third special, beating another Toyota driven by rookie Henk Lategan by 2’27. Stéphane Peterhansel has finished a little more than 4’ behind the Qatari.

Stéphane Peterhansel and his co-pilot Édouard Boulanger managed to avoid the navigational pitfalls to gain time in the general standings on their team-mates Carlos Sainz and Lucas Cruz. “Mister Dakar” now boasts a lead of 5’09 over Nasser Al-Attiyah and more than 26’ over Mathieu Serradori. Occupying fourth place, Sainz now trails the Frenchman by 33’.

He began the special in 29th position, but Toby Price soon soared into the wake of Kevin Benavides. Although the Argentinean held off Price for the first 262 kilometers, in the end he has had to make do with a nonetheless impressive second place, a little more than a minute behind the Australian, who has picked up his 13th stage victory in Ad-Dawasir.

With the fourth best time on the day’s special, Skyler Howes takes over from Joan Barreda at the top of the general standings. The former rival of titleholder Ricky Brabec in the USA now possesses a lead of 33’’ over Argentinean Kevin Benavides and 1’28 over Frenchman Xavier De Soultrait.

After a fine stage yesterday, with a one-two for Barreda and Brabec who claimed the top of the overall rally standings, today was the turn of Kevin Benavides. The Argentinean Monster Energy Honda Team rider finished the Dakar 2021 third stage in runner-up spot, just short of the leadership.

The Wadi Ad-Dawasir loop, over 630 total kilometers, including 403 km against the clock, once again turned the Dakar standings on their head. It has become normal to see the first riders to tackle the special drop time to their rivals due to the complicated task of navigating in a very demanding Dakar. Riders, starting further back, are able to re-trace the tracks and hunt down the front-runners, as they are able to focus on riding rather than the tough navigating. The third stage today served up dunes and desert navigation throughout, featuring some trial like areas on certain stretches of the route.

Joan Barreda and Ricky Brabec – first and second yesterday – had a rough day, opening the track with arduous navigation before reaching the dunes, which proved difficult with the strong winds blowing in from Wadi Ad-Dawasir. The pair tried to manage the distance from their pursuers, but it was a grueling mission for the Monster Energy Honda Team duo who left behind easy-to-follow tracks. In the end, the Spaniard took thirtieth place with the American posting twenty-fifth. The result leaves the pair lying in fairly reasonable overall positions: Barreda is eighth and Brabec thirteenth, 11’15” behind the leader.

Second place at the end of the first looping stage went to Kevin Benavides. The rider, hailing from Salta, Argentina got off to a strong start this morning, hoping to clinch a partial victory, but eventually having to settle for the second best time of the day. The result places the rider second, just 33 seconds behind the rider who leads the provisional.

It turned out to be a good day for Chilean José Ignacio Cornejo, who showed no signs of hesitation whilst momentarily opening the track for several kilometers after catching up with the leading group. The Iquiqueño rider imposed a steady pace throughout to claim tenth final place, both in this third stage and in the general standings.

Tomorrow, stage four, will see the Dakar return to the Saudi Arabian capital, but unlike last year, it won’t be for the rest day, although competitors will definitely need it after completing over 800 kilometers of stage. The longest day of the event takes place between Wadi Ad-Dawasir and Riyadh with a 476-kilometre link section compared to just 337km against the clock.

Nicolás Cavigliasso has reacquainted himself with victory through proving to be the quickest rider on the special around Wadi Ad-Dawasir. The Argentinean, who won in 2019 and boasts no less than nine special stage victories, was able to maintain a sufficient gap of one minute over his closest pursuer Giovanni Enrico. Yesterday’s winner Pablo Copetti had a tougher time in the last few kilometres and finished the special in fifth place, behind Alexandre Giroud and Manuel Andújar.

Siarhei Viazovich has won the day’s special. Behind the wheel of his Maz truck decked out in the colors of the MAZ-SPORTauto team which celebrated its 10th birthday last month, the Belorussian finished just 18’’ ahead of Dmitry Sotnikov, who won the first two stages. Anton Shibalov completed the special in third position, 1’16 behind. Titleholder Andrey Karginov was in the leading pack on the final section of the special, but lost several minutes and finished in fifth place, 3 minutes behind the day’s winner.