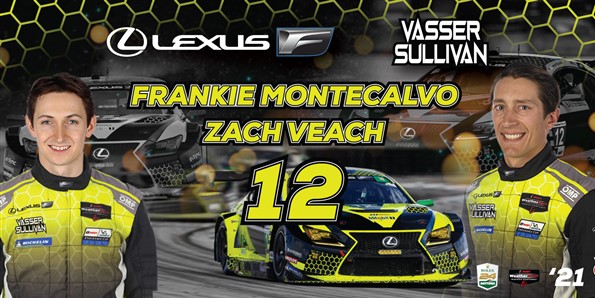 Montecalvo, 30, from Highlands, New Jersey, will be contesting his third season in a Vasser Sullivan owned IMSA GTD class Lexus. He had a breakout season in 2020 capturing his first IMSA win (Road America) and first IMSA poles (Grand Prix of Sebring and Grand Prix at Michelin Raceway Road Atlanta).

Veach, 26, a native of Stockdale, Ohio, is a newcomer to sports car racing having competed in four Indianapolis 500 events as part of contesting four full-seasons in the NTT IndyCar Series. During the 2020 IndyCar season, Veach had a best finish of fourth at Texas Motor Speedway competing in the Genesys 300 event. In his early career, Veach won the 2011 USF2000 Winterfest Championship, the 2012 Formula Car Championship, and spent three seasons in Indy Lights with a best championship finish of third.

All four drivers will participate in the ROAR Before the Rolex 24 at Daytona International Speedway, January 21-24, 2021.

“We are excited to announce that we have signed Frankie Montecalvo and Zach Veach to drive the No. 12 Vasser Sullivan Lexus RC F GT3 for the 2021 IMSA GTD class championship season. After two seasons with us, Frankie has now become a contender for a pole and/or a win every weekend.  We expect you’ll see more of this from Frankie in the ’21 season.

The timing with Zach is perfect as he transitions to the next stage of his career in sports cars after a great run in IndyCar. Zach has already shown his commitment to winning by relocating to Charlotte to be closer to the team and cut down his time to get up to speed in sports cars.  We look forward to seeing Frankie and Zach being extremely competitive this season.”

“The 2020 season was a crazy ride full of ups and downs. As a team we had multiple wins, podiums and pole positions. Each year I feel we improved, just getting better and better. So I can’t wait to make my third consecutive year with Vasser Sullivan a great one.”

“I am thrilled we were able to put this program together. Everyone from Vasser Sullivan has been a dream to work with. I can’t wait to get to Daytona in January to start what will be a great year with my teammate Frankie Montecalvo in the No. 12 Vasser Sullivan Lexus RC F GT3 car.”

Vasser and Sullivan were allied and partners from 2011-2016 with KVSH Racing in the IndyCar Series, winning the 2013 Indianapolis 500. In 2017, Vasser and Sullivan established Vasser-Sullivan Racing to compete in the IndyCar series. In 2018, they formed a partnership with Dale Coyne to establish Dale Coyne Racing with Vasser-Sullivan to compete full time in the IndyCar Series Championship. In its first year, the team earned multiple podiums including winning the Grand Prix of St. Petersburg, and finished seventh in the 2018 championship standings. In 2019, the team scored two top-five finishes, a season high third at Barber and a fifth at COTA, and nine top-10 showings. During the 2020 season Coyne Vasser Sullivan finished a season-high fourth in the Indianapolis 500.