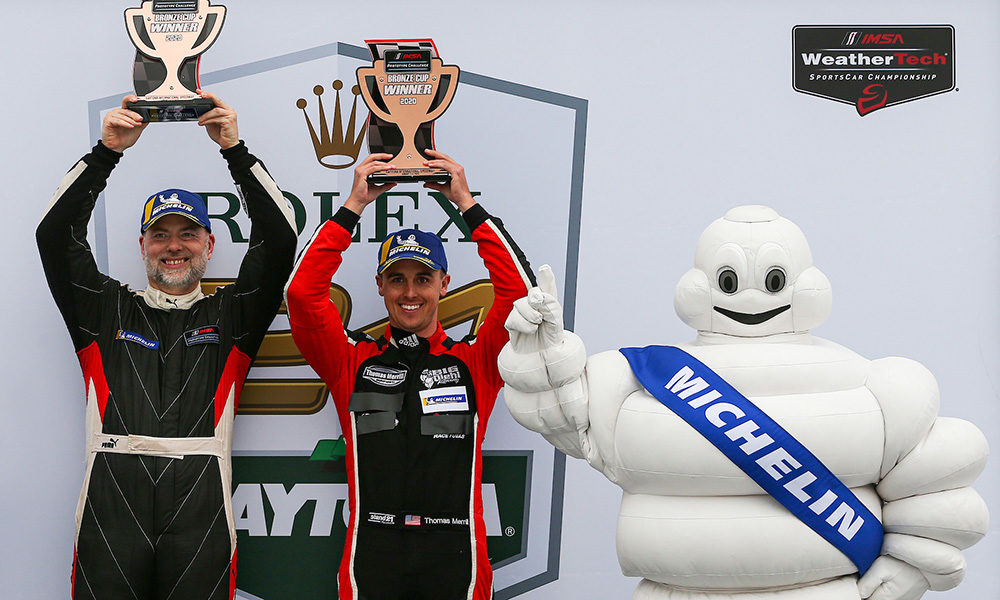 WIN Autosport, a race team formed by driver Steven Thomas (shown above left), will enter a car driven by Thomas in the full IMSA WeatherTech Sportscar Championship in the LeMans Prototype 2 (LMP2 class), including the Rolex 24 at Daytona. WIN Autosport will also enter Thomas in a LeMans Prototype 3 (LMP3 class) car in the 2021 IMSA Prototype Challenge with Thomas driving the six sprint races solo.  In 2020, Thomas won the Bronze Cup, driving four races solo and two races with Thomas Merrill.

For WIN’s 2021 LMP2 entry into the IMSA WeatherTech Sportscar Championship, the headline driver will be Tristan Nunez, the former Mazda factory driver who spent the last two years driving Mazda’s DPi car in the IMSA WeatherTech series. Thomas Merrill is back to drive with Thomas in the endurance races; Daytona, Sebring, Watkins Glen and Michelin Raceway Road Atlanta.  Matt Bell, Prototype Challenge Champion, will join the trio at Daytona for the Rolex 24-hour race.

Bobby Golasinski, who was recruited by Thomas to assist him with this venture and who will have an interest in the new team, likes the driver lineup. “Tristan is one of the best prototype drivers in the business and Bell and Merrill are top pros.  Steven Thomas has only been driving racecars for two years, but with Ross Bentley of Speed Secrets as his coach he has progressed quickly, turning the fastest lap among bronze drivers at the final Prototype Challenge race last year and winning the Bronze Cup. Bobby Orgel at PR1 graciously helped us test Steve in the P2 car and we both think he can be successful.”

Thomas said convincing Nunez to join the program was the real coup. “When Tristan believed we had built a good team and wanted to race with us, that was a big boost,” Thomas said. “Tristan is young but already brings so much top-level experience. He helps the team in every way. And of course, he’s quick. Bell is a champion and has great experience and watch out for Thomas Merrill. He will be as quick as anyone.”

Nunez is looking forward to the challenge. “I believe I can bring WeatherTech racing experience and hopefully make everyone better.”

Golasinski explained why he wanted to partner with Thomas. “Steve recognizes how important each member of the team is to our success. It’s unusual for a bronze driver to be so committed to the team around him. Steve’s loyalty and appreciation for the work the guys do really makes the team pull together. All of us want to be a part of this new venture and see how far we can go.”

Thomas thanked Ross Bentley for his quick rise and Michael Andretti and Andretti Autosports’ JF Thormann for sparking his enthusiasm. “I went to the Formula One race in Austin two and a half years ago and barely knew anything about racing. After talking racing with Michael and JF, I realized that I could race on the same track with top pros. Six months later in January 2019, I was in my first race car.”