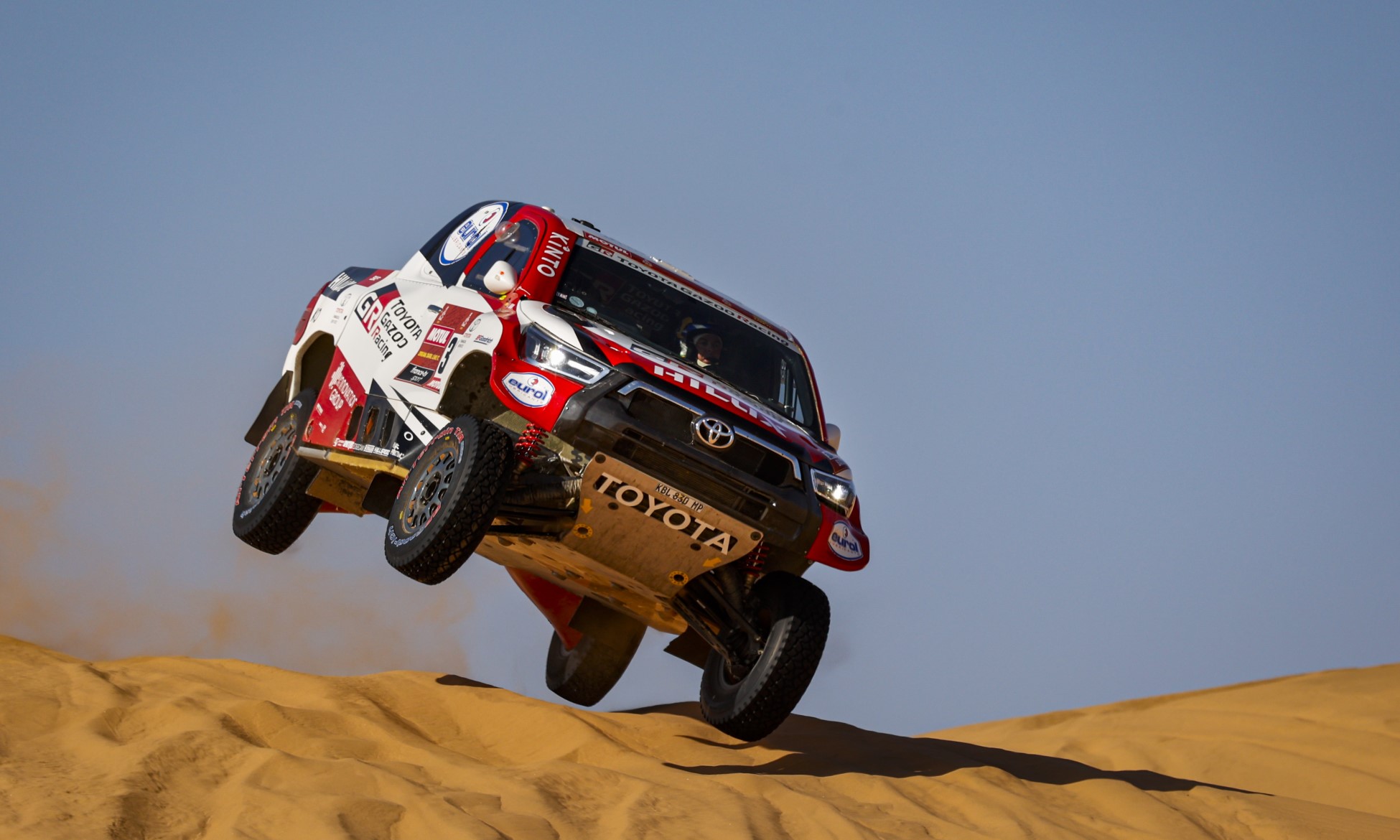 It is the kind of recipe in which Saudi Arabia specializes: one containing wadis, valleys and jebels, sprinkled with rocks and served with portions of dunes as well as large plateaux. Such is the setting that the competitors were able to admire between Riyadh and Al Qaisumah… if their eyes were not riveted to their road-books. When reflection and interpretation are required to make the right choices, it is necessary to slow down to get things done quicker. The fastest riders such as Joan Barreda and Daniel Sanders in the bike race, but also Stéphane Peterhansel and Nasser Al-Attiyah in the car category somewhat neglected this point and paid the price to varying degrees depending on the leads they had this morning. In any case, the journey to the North West of the country was anything but insignificant.

People in a hurry do not always have the last word on the Dakar. On previous editions, Kevin Benavides has learned this adage at his expense. This time, he very nearly came a cropper, but instead managed to bounce back incredibly, because he won the stage finishing in Al Qaisumah, where he reached the bivouac as the new leader of the general standings. The tumble that the Argentinean was not able to avoid in the dunes nevertheless left him with a broken nose and injured ankle, whilst he greatly owes his new position at the rally’s summit to the cautious navigating talents of his team-mate and guide for the day, Ignacio Cornejo, 2nd on the stage and 3rd in the general standings.

In the car category, the race is still bossed by Stéphane Peterhansel and Nasser Al-Attiyah, though they made mistakes enabling Giniel De Villiers to post the best time of the day. For the moment, they are out of the reach of Carlos Sainz, who took advantage of Henk Lategan’s withdrawal to climb up a place, though he got very lost today and now lies 48 minutes behind his team-mate in the general standings. The verdict was even harsher for Sébastien Loeb, who lost 50 additional minutes, and smiles have been wiped off the faces of the SRT team, who saw the hopes of a final top 10 finish for Mathieu Serradori and Yasir Seaidan perhaps definitively snuffed out.

In the quad race, Nicolás Cavigliasso took his time with the day’s stage but is starting to seriously distance his rivals after winning his second special of the week, just like “Chaleco” López did, though the Chilean only possesses a fragile lead of less than 11 minutes over Aron Domżała in the lightweight vehicle category.

In the truck race, Dmitry Sotnikov boasts a reassuring advantage amounting to 33 minutes in the general standings over his team-mate Anton Shibalov, while Andrey Karginov triumphed on the special today.

It was a perfect day for South Africa on the special heading towards Al Qaissimah, or rather almost perfect… Firstly, Giniel De Villiers reacquainted himself with victory this year. The Toyota driver called upon his experience and navigational skill in the Saudi desert to avoid the pitfalls on one of the most difficult stages of this edition and accomplish the best time. His rivals today were not Al-Attiyah or Peterhansel, but none other than Brian Baragwanath, who picked up another podium finish this year, crossing the line less than a minute behind his countryman. The only fly in the ointment outside this one-two finish was the accident suffered by Henk Lategan in the first kilometers, struck down on the way up after displaying lightning pace in the last two stages (with 3rd and then 2nd placed finishes). The rookie rolled his car and fractured his collar bone. The rainbow nation will have to wait until next year to hope for a one-two-three!

Once again, anything can happen to any competitor before they have crossed the finishing line. This is especially the case on the Dakar and Kris Meeke received a nasty reminder of this fact today. Renowned for his prowess in WRC, the British driver started his very first Dakar at a hellish pace and picked up victory on the prologue. After several difficult stages, the PH-Sport driver seemed to have found his feet in the Saudi desert on the fourth special which he finished in second place. Relegated to ninth place at today’s first intermediate point, Meeke put the pedal to the metal to soar back up the standings and reach the third step of the provisional stage podium, only four minutes from victory. However, a mechanical problem on the last portion of the special shattered the plans of the Meeke and Rosegaar duo. At the end of the day, they were still awaiting their assistance team a little more than 100 km from the finishing line.

With a 4th special stage victory on the Dakar for Kevin Benavides and his 12th for Nicolás Cavigliasso, the day’s two winners in the bike and quad categories have raised the number of stages won by Argentinean riders to 75. This impressive figure owes much to successes in the quad race, with 62 triumphs achieved including 28 by brothers Marcos and Alejandro Patronelli at the height of their powers. To continue writing racing history for his country, Benavides can now try to emulate Orlando Terranova, who has won 6 stages in the car category, while Cavigliasso is closing in on the total of Marcos Patronelli, who boasts 18 victories.

Aron Domżała: “The last three stages were for tourists compared to that stage”

The Polish rider finished 5th on the stage won by “Chaleco” López and is especially ready to pounce on any opportunity, trailing behind the Chilean in the general standings by 10’51’’.

“It was tricky navigation. We got lost a little bit at the beginning, but then I would say it wasn’t a fast stage, it was really technical with really hard dunes. I love that sort of stage. This is the Dakar – the last three stages were for tourists compared to that stage. We’re close to “Chaleco” but today he was much faster. In the dunes he has incredible speed, so today he put seven minutes into us, but there are still a lot of stages to go”.