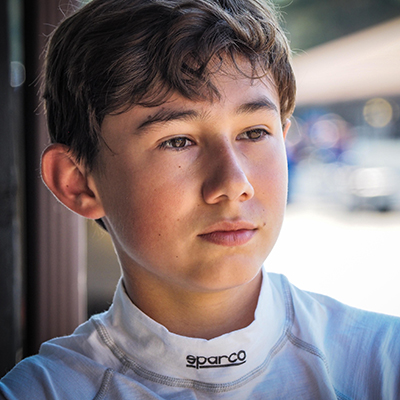 “When you’re racing, everyone out there is just a car. It doesn’t matter who’s driving.”

16-year-old Nolan Siegel has dealt with questions about his age since he first stepped into a kart at the age of 8. Joining the Cooper Tires USF2000 Championship in 2019, the Palo Alto, California native earned two podium finishes last season, declaring his intent to move up the Road to Indy Presented by Cooper Tires ladder – and hoping to one day reach the pinnacle of American open-wheel racing, the NTT INDYCAR SERIES.

Siegel comes by his love of racing naturally. Tagging along when his father Mark signed on for track days at Sonoma Raceway, Siegel found himself in the track’s karting summer camp. He loved karting from that moment, and a year later began racing – and that’s when things took a serious turn. Racing in local and regional karting events for several years, Siegel had his first look at formula racing two years ago, winning the Simraceway Formula 3 Series title at Sonoma.

“I was more focused on karting, but they had the Formula 3 championship at Sonoma, and it was a good way to ease into car racing,” said Siegel. “I did the series of classes, then the race series, which was a really easy path from karts to cars. It was great to be able to have my first experience in a car be at my home track, and great to go on to win the race series title.”

With Siegel too young to race most other formula car series, the focus turned to the Road to Indy and the USF2000 Championship. One of the coaches at Sonoma, veteran driver Tom Dyer, coached the Newman Wachs Racing team, made an introduction and the youngster joined the series in 2019. He realized at his first official test that this was another level of racing.

“I didn’t know that much about USF2000, but at the Homestead Spring Training test in March it became obvious that this was the place with a clear path to the NTT INDYCAR SERIES. That’s the coolest part of the Road to Indy, that young drivers can get into USF2000 and see the path, especially with all the graduates now in INDYCAR.

“And honestly, I don’t think the age gap affected me. Cameron Shields was my teammate that year and that helped a lot. He was so experienced, and he was so open with me, going over data and video. It helped improve both of us.”

Siegel drove with Jay Howard Driver Development in 2020, working with former Road to Indy champ and INDYCAR SERIES racer Jay Howard. Getting a front-row view of the stresses of a championship campaign furthered his racing education, as Siegel earned two podium finishes at Mid-Ohio.

“I was hoping to get some consistent top-10s and top-fives this season, so to get a podium in the fourth race was a big confidence booster, and it changed my expectations a bit. Having the teammates I did this year was a big part of that, since all of us (Siegel, Christian Rasmussen, Christian Bogle, Wyatt Brichacek and Bijoy Garg) got along so well and we helped each other. It was a difficult season, with the compressed schedule, and they made everything just that much more fun. It was cool to see the team come away with the championship!”

As 2020 came to a close, the young Californian joined the ranks of drivers honing their skills – and garnering valuable race seat time – in sports car racing. He joined his father and Dyer behind the wheel of a Stoner Car Care fielded by Automatic Racing Aston Martin at Circuit of the Americas earlier this month, capturing victory in an eight-hour World Racing League endurance event.

“We were looking for more seat time, and my dad has been racing against the Stoner Car Care drivers all season long in the IMSA Michelin Pilot Challenge, so he knew those guys. It was my first time driving a sports car, but it was easy to adapt to everything, and everyone at Automatic Racing made it such an easy transition. The car was good right off the truck but having Tom Dyer there really helped. He helped tune the car a little bit and made setup changes, so I was able to focus on just getting used to driving the car. We had a test session, then treated the first race as a practice. I have to say, it was a little strange at first – I felt as though I couldn’t really see anything – but I got used to it quickly. The Aston Martin was super easy to drive so it wasn’t as difficult a transition as I thought it might be. I was able to start with traction control and ABS turned up, then turned those settings down as I adjusted to the car. It was physically easier to drive than a formula car, which helped when I had two-hour stints.

“By the end of my second stint halfway through the race, we were in the lead and we stretched it out from there. It was really cool, especially to get the win with Tom and my dad.”

Can fans expect to see Siegel competing in more sports car races in 2021? The Road to Indy is the primary focus, as he hopes to follow in Rasmussen’s footsteps and make a run for the USF2000 title driving for DEForce Racing this season. But if the opportunities are there, especially to race with his dad again, Siegel would love to give it a shot.

“I’m very excited to be joining DEForce Racing this year. The team has a winning recipe, and I am ready to fight for the championship. But I’d love to do more endurance races, especially in IMSA. The format is great in sports car racing – to get the win as a team instead of just as a driver is an entirely different experience and I really enjoyed that.”