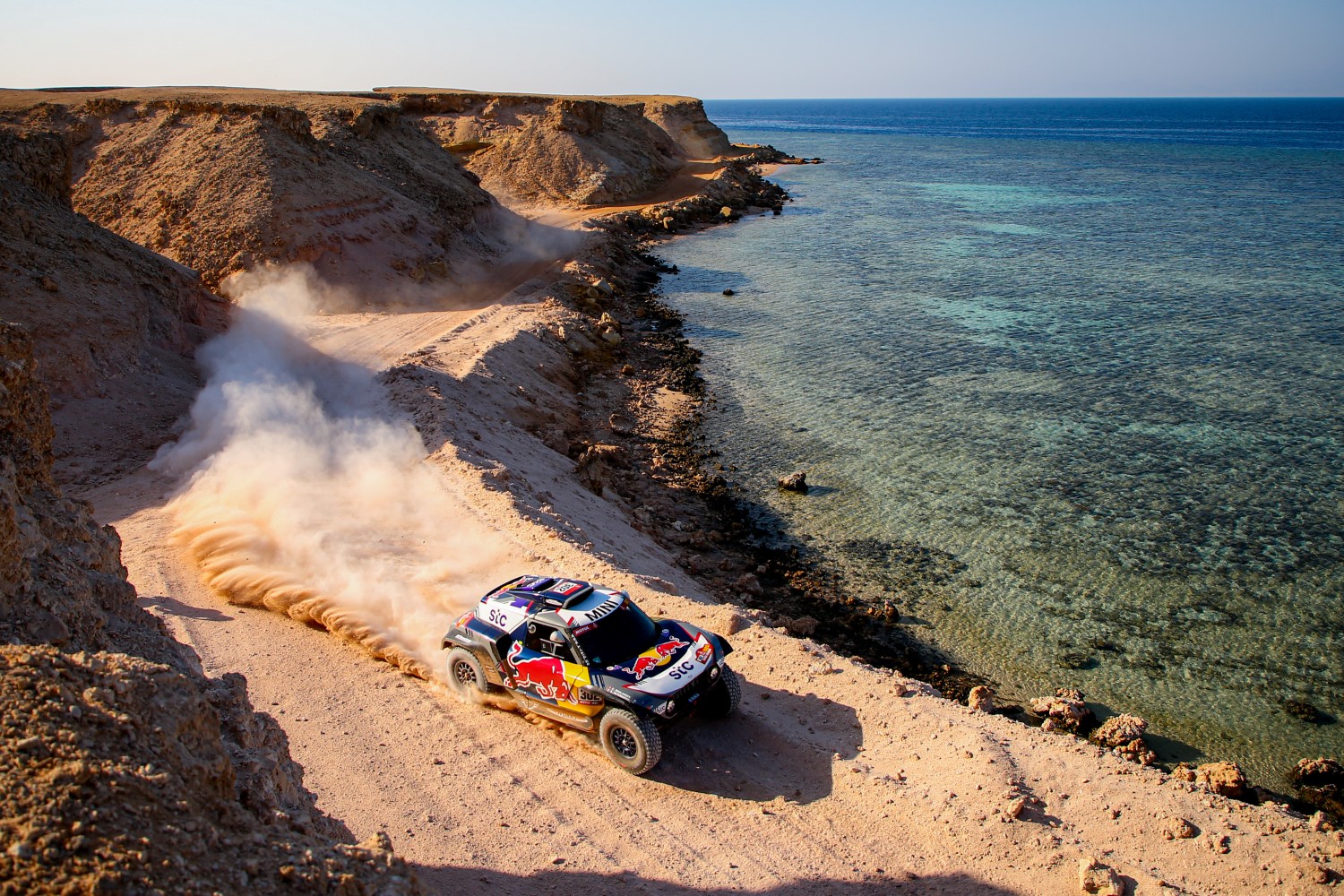 With consistency, Stephane Peterhansel has led the overall rankings since Stage 2, but he had yet to win a stage in the 2021 Dakar Rally. That ended Tuesday as he beat Nasser Al-Attiyah, to the line by 12 minutes.

In Bikes Toby Price crashed hard 150 kilometers into Stage 9 of the Dakar Rally and was airlifted to a local hospital.

The second-place finish on Monday put Price on course early. He was gaining on leader Nacho Cornejo and running third at the most recent check point before his crash. Ricky Brabec and Sam Sunderland both stopped to render assistance. Brabec gave up 22 minutes with the charitable act. Sunderland lost 16 minutes.

Brabec was originally credited with ninth in the stage, but after the lost time was credited, he climbed to second behind Kevin Benavides. Florimo finished third, with Sunderland elevated to fourth after his time was also corrected.

“Rough day out in the books today,” Brabec said on Instagram. “Came up on the legend Toby Price down and out of it so that put a gut wrenching feeling in the program.”

Cars: With consistency, Stephane Peterhansel has led the overall rankings since Stage 2, but he had yet to win a stage in the 2021 Dakar Rally. That ended Tuesday as he beat Nasser Al-Attiyah, to the line by 12 minutes.

It took three tire punctures to slow Al-Attiyah, however.

“The navigation was no problem, but we had three flat tires, three punctures and we didn’t have any spare wheels, so we decided to just to get to the finish and Stephane passed us,” Al-Attiyah said. “It was not easy for us today. But what can we do? We can’t change anything with the tires. That’s life, I’m not disappointed. What can I do? I have done my best and I’m here at the finishing line. Still, everything is possible.”

Carlos Sainz is a distant third in the overall with a deficit of 1 hour, 2 minutes, and 25 seconds. Sainz finished 12th in Stage 9 and lost 22 minutes, 30 seconds.

Side by side UTVs (SSV)/lightweight/light prototypes: Finishing 10th in Stage 9, Austin Jones could not hold the overall lead he took on Monday as Francisco Contardo won the stage by 11 minutes, 34 seconds over Khalifa Al-Attiyah.

Jones finished 33 minutes, 16 seconds behind the leader and fell to second in the overall standings behind Contardo.

Aron Domzala had another difficult stage and lost an additional 27 minutes, 23 seconds. He remains third in the overall standings.

Quads:  Giovanni Enrico earned his first stage win of 2021 and beat Alexandre Giroud to the line by 1 minute, 30 seconds. Manuel Andujar also kept the leaders in sight and finished just 15 seconds behind Giroud.

With his third-place result in Stage 9, Andujar retains the overall lead over Giroud by 19 minutes, 28 seconds.

Trucks: Martin Macik broke the stranglehold of Kamaz in Stage 9. He scored his first stage win by 2 minutes, 27 seconds over Airat Mardeev. Dmitry Sotnikov finished 10 seconds further back in third and retains his overall lead.

Stéphane Peterhansel: “A real Dakar stage, a little bit like in the past in Africa”

Thanks to his composure, the general standings leader won the stage enabling him to open up a gap at the summit of the rally: he now leads Nasser Al-Attiyah by 17’50’’.

“For sure this stage was a really complicated one. From the beginning we saw that the day would be long, so we decided to not be on full attack but more to manage the tires and be clean with the navigation. At the end we overtook Carlos and also Nasser. We overtook him two times because he had a puncture. It was a real Dakar stage, a little bit like in the past in Africa, where it was not only a question of speed but it was also a question of strategy, just to adapt the speed to the condition of the tracks. For sure, normally in such conditions I was always not so bad, so it’s still good for me”.