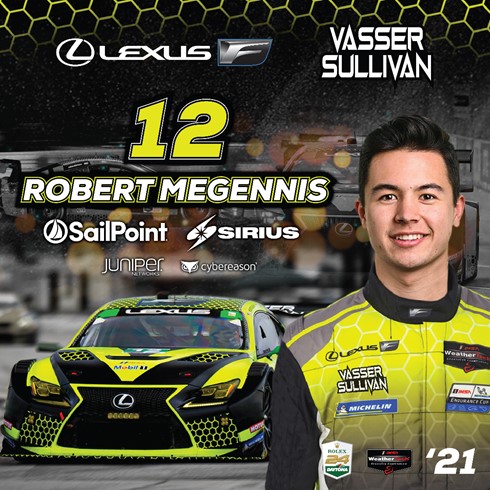 Vasser Sullivan Racing announced today that Robert Megennis will compete for the squad in the 2021 IMSA Michelin Endurance Cup races beginning with the Rolex 24 at Daytona, January 29-31, 2021 at Daytona International Speedway.

Megennis will co-drive the No. 12 Vasser Sullivan Lexus RC F GT3 entry with Zach Veach and Frankie Montecalvo in all four Endurance Cup events: the Rolex 24 at Daytona; the Mobil 1 Twelve Hours of Sebring; the Sahlen’s Six Hours of the Glen at Watkins Glen and the Motul Petit Le Mans at Michelin Raceway Road Atlanta.

Megennis, 20, from New York, New York, has successfully competed in open-wheel racing. In 2019, he ran in the Indy Lights Championship finishing fifth in the standings on the strength of six podium performances including a win at the Indianapolis Grand Prix and the pole for the Freedom 100. Megennis drove in the U. S. F2000 Series in 2016 and 2017 earning Rookie of the Year honors in 2016. He ran in the Pro Mazda Series in 2018. With the cancellation of Indy Lights for the 2020 season, Megennis turned his attention overseas to endurance racing competing in two European Le Mans Series races. He also made his endurance sports car debut at the Indy 8 Hour Intercontinental GT Challenge race.

All seven drivers will participate in the ROAR Before the Rolex 24 at Daytona International Speedway, January 21-24, 2021.

The final roster position for the No. 14 Vasser Sullivan Lexus entry is expected to be announced early next week.

“We watched Robert very closely throughout Indy Lights and at the Indy 8 Hour race. After testing him at Daytona it became clear he was the right fit for our team in the No. 12 Lexus for the endurance events. We are excited to have him as part of our driver lineup and look forward to working with him this season.”

“I’m very excited to join the Vasser Sullivan Lexus program for the IMSA Michelin Endurance Cup. After my first endurance racing experiences in 2020, I can’t wait to show what I can do in IMSA and in some of the biggest and most competitive endurance races in the world. There will be a lot to learn, but I’m confident I’ll have the right people around me to go and win some races. I’m grateful to all the Vasser Sullivan team for giving me this opportunity. Huge thanks to my partners SailPoint, Sirius Computer Solutions, Juniper Networks, and Cybereason for the incredible support in making this happen.”