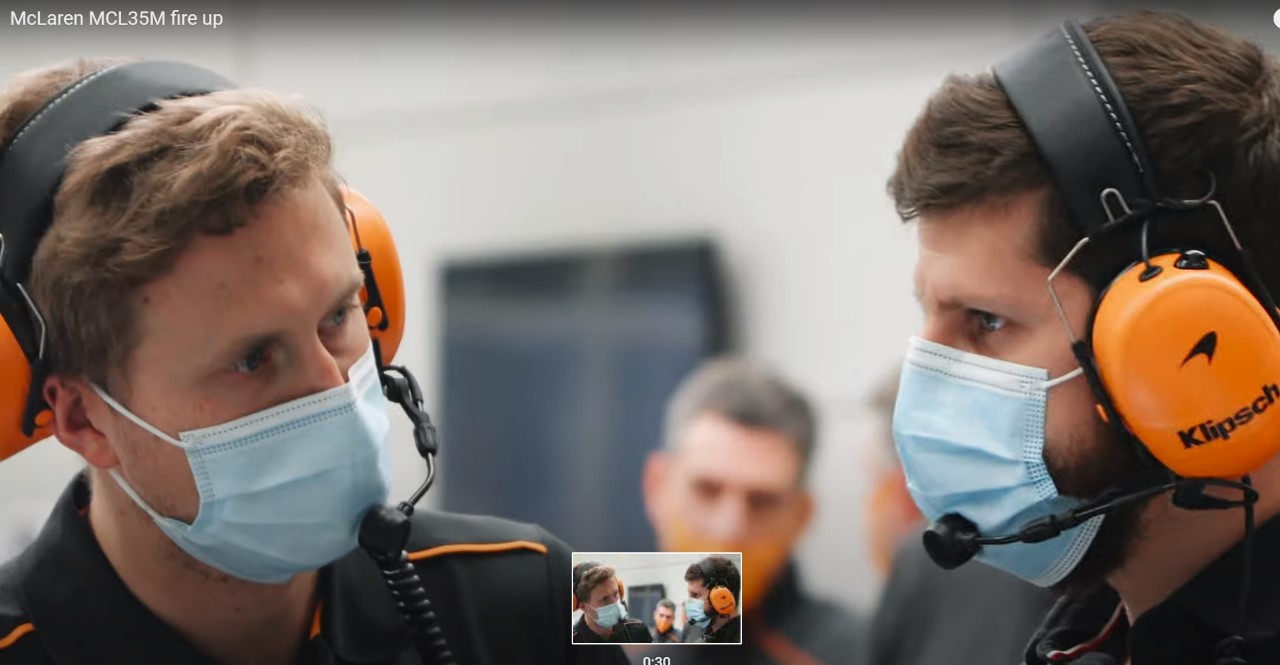 What does it take to produce a Formula 1 car during a global pandemic?

“Who cares if you’re still in your pajamas or whether you’ve done your hair?” says McLaren F1 Production Director Piers Thynne.

For the record, we were dressed and had done our hair when we met up with Piers via video call to talk about the production of our 2021 Formula 1 challenger. But it did make us wonder: has any other McLaren F1 car had as many pajama-donned man-hours devoted to it as the MCL35M? Well, even if John Barnard had worked his magic in the drawing office looking like Wee Willie Winkie when designing the MP4/2, we think the chances are unlikely. Does this make our ’21 car any less remarkable than its predecessors? If anything it’s a reflection of the challenging circumstances in which it’s been built and only makes it more remarkable. With launch not far away, we caught up with Piers to learn more about the MCL35M and understand just what it takes to produce an F1 car during a global pandemic.

Let’s start with a question that’s on the lips of many fans, is the MCL35M build going to plan and are we on schedule for launch?

If you work in the production team, you work hard every single month of the year but when you really earn your money is in January and February: it’s the toughest time of the year. We are on plan with a lot of things. There are some challenges in certain areas at the moment – but that’s F1. If you’re not encountering any problems, then you’re probably not being aggressive enough. If everything is easy and straightforward it tends to mean you’re giving performance away because you’re not pushing the boundaries.

The real challenge isn’t necessarily producing the launch car, it’s how you evolve from it by upgrading it as quickly as possible. The key is to not spend time and resource on anything that isn’t needed. If you make too many launch-spec parts, you’ve wasted capacity that could have been used to produce an upgrade to the latest specification.

Passing the FIA crash tests is a significant milestone in the birth of any new chassis, when was the MCL35M chassis homologated and was the process different from previous years due to stability in the regulations and covid-19?

The homologation of the chassis is always a huge, huge milestone. It’s an uneasy and anxious time for lots of people in the team. It reminds me of when my wife gave birth to twins – the only difference is that we have to go through homologation every year! Although, we’re the only team that had to do it for this year’s car because every other team has carried its 2020 chassis over to 2021. We didn’t have this luxury due to the changes made to the chassis to accommodate the switch to the Mercedes power unit.

There were some challenges, as is the case every year, but good teamwork between manufacturing and design meant the chassis was homologated on time in December. The process didn’t really differ but, because of covid-19 restrictions, the FIA couldn’t physically be there to witness the crash test. Instead, we had to set up cameras and live links, so they could see all the instrumentation and closely follow every step of the process.

When we spoke to McLaren F1 Technical Director James Key last month he explained how the MCL35M was akin to a new car, can you tell us what’s changed?

Whereas every other team will carry over most of its car from last year into this year, our switch to the Mercedes power unit means that’s not the case for us. It’s driven a huge amount of change and, essentially, we’ve been building a new car. The number of new parts on the MCL35M is about the same as when we built the MCL35.

The back of the chassis and gearbox bell housing around the engine have changed significantly to adapt to the new power unit. Changing power unit greatly alters the architecture of the car and the way everything is packaged, so the entire cooling layout and all the pipework – be that for fluid or air – has changed, along with all electrical harnessing and control boxes.

The MCL35M is the first McLaren F1 car to be produced entirely in a covid-safe environment, what does it take to build an F1 car in the time of covid-19?

Covid-19 has had a massive influence on what we’ve done in the last six to eight months and how we’ve gone about doing it. We were early to the party when it came to defining covid-safe protocols and working practices because we had to put them in place during the first lockdown so we could manufacture ventilator parts and trolleys as part of the VentilatorChallengeUK project.

The amount of remote working we do has risen massively and that’s meant plenty of video calls. For those members of the production team that work from the McLaren Technology Center we run split shifts, be that early/late or day/night, so that if we have a covid-19 outbreak the whole production team wouldn’t be forced out of action.

Normally, if you wanted to know something or find out how something was progressing you would just visit the relevant part of the MTC, but you can’t do that now – we have to be so strict with where our people go and when. Even though people can’t move freely around the MTC, the parts need to. We’ve sectioned the building into zones and the people in each zone are encouraged, wherever possible, to not go into another zone. For example, someone in machining shouldn’t go into composites and vice versa. When parts need to go from one zone to another, they are placed in designated holding areas from where they can be collected – we never have a human-to-human transaction.

Staying covid-safe is a huge challenge but everyone in the team has embraced the protocols and knows that they’re there to keep us all healthy. No one goes into the MTC unless there’s an absolute need, it’s been signed off by their manager and director, and they’ve been tested for covid-19. This has led to using video calls and photographs to allow team members working remotely to understand problems, so they can help find the right solutions.

With team members working remotely, how have you ensured that everyone still feels part of one team?

Working together in a virtual environment has brought its own challenges. It’s not quite the same as being in the same room as someone and that’s why it’s so important to encourage engagement and participation from everyone in every virtual meeting. And that means turning cameras on. Who cares if you’re still in your pajamas or whether you’ve done your hair? I’m not worried about that. It doesn’t matter.

What matters is every member of the team being real – and by that I mean just being honest and open in what is a really weird time. If you need to answer the door to take delivery of something, that’s fine. If homeschooling is proving a nightmare, and you’re not able to complete a piece of work until later that day, that’s fine. That’s all real. That’s the reality of life right now and people need to feel comfortable saying what they’re dealing with and how it might impact their work. Having this level of openness is how we maintain togetherness when physical interaction isn’t possible.

You’ve talked about the changes, but are we carrying over anything over from the MCL35 to the MCL35M?

There are some significant elements of carryover as we enter the cost cap. The FIA created a list of Transitional Carry Over (TCO) components that are outside of this year’s cost cap. These are parts that can be used in 2021 if they were run on last year’s car. We’ve pushed these TCO regulations to the absolute maximum to allow us to carry over as much as possible, such as gearbox internals and some suspension components, and therefore not have to use a portion of our 2021 budget on their design and production.

Are you confident we can continue to make progress in our journey back to the front of the grid despite the new cost constraints that have come into force this year?

You can’t just make a cheaper car. If you do, you’ll make a slower car. You’ve got to look at the problem holistically to drive efficiencies in all areas but not to the detriment of the car’s performance. I don’t think you’re going to see which teams have really got a handle on this approach until next year because the TCO regulations have skewed the picture for 2021. The real test will come with the design and manufacture of the ’22 car.

Looking ahead to 2022, the aero development freeze was lifted on 1 January 2021, what stage has the production team got to with the ’22 car?

We were able to hit the ground running with the wind tunnel program for the ’22 car, which started at the beginning of this month when the aero development freeze was lifted. We manufactured a huge amount of parts to support the commencement of that program. In terms of the actual production of the ’22 car, it’s very early days and the focus is predominantly on parts to be tested in the wind tunnel.

As the aerodynamic design matures we’ll make more and more aero components for wind tunnel testing. These tests are really important: it’s all about establishing what works and what doesn’t because when we do come to build the ’22 car we want it to be right first time. The test pieces should push the boundaries aerodynamically because that’s how you gain performance. If they work, then great. If they don’t, we can always take a step back for the actual production part. You need to shoot for the stars and that’s exactly what were doing to get back to the front of the grid.

he MCL35M has reached an important milestone in its development, as we fired up the Mercedes engine for the first time ahead of the 2021 Formula 1 campaign.

Turn the volume up and listen to the MCL35M come to life: