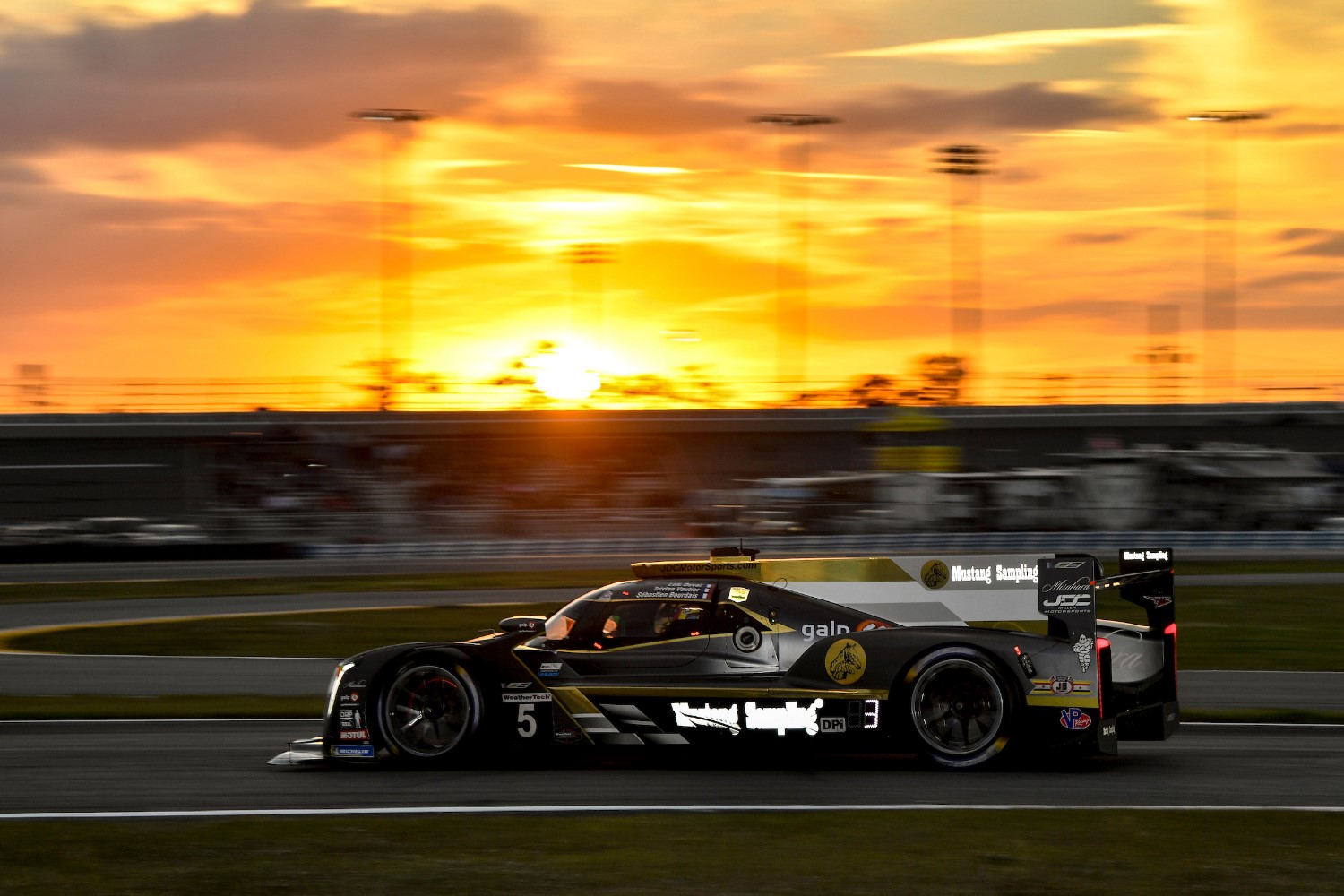 Sebastien Bourdais (shown above) has continued to keep the #5 Mustang Sampling Cadillac DPi-V.R out front in the Rolex 24 at Daytona as the race reached the one-quarter mark.

The #10 remains in contention despite a slow pit stop for an issue mounting the car’s right-rear tire in the fifth hour.

The #48 Cadillac and early leader – the #31 Action Express Cadillac, round out the top-5.

The #55 Mazda runs in 6th with Oliver Jarvis at the wheel, 1-lap back.

The #11 WIN Autosport entry of Matt Bell leads LMP2 by 40-secondse over the No. 82 DragonSpeed Oreca 07 Gibson of Fabian Schiller, with Tower Motorsports’ John Farano currently running in third.

Corvette Racing ended the first quarter of the Rolex 24 At Daytona just as it started: first and second place in its class. Alexander Sims led Nicky Catsburg by less than two seconds as the pair of Chevrolet Corvette C8.Rs flexed their muscle in the GT Le Mans (GTLM) category of the IMSA WeatherTech SportsCar Championship.

Both Corvettes swapped the lead in the first six hours as they avoided much of the same trouble that befell other cars in the opening portion of the race. A total of 46 cars took the green flag, which saw Tommy Milner hold the lead from the GTLM pole in the No. 4 Mobil 1/SiriusXM Corvette for the first 20 minutes before Antonio Garcia moved ahead in the No. 3 Mobil 1/SiriusXM C8.R for the bulk of his stint.

Both Milner and Garcia drove three stints before handing over respectively to Nick Tandy and Jordan Taylor. The two Corvette teammates took turns in the lead before Tandy regained the advantage for the No. 4 Corvette team just past the four-hour mark. The two C8.Rs ran in that position through the six-hour mark.

The Corvettes, both Rahal BMWs and the #62 Risi Ferrari run on the same lap – 9 laps behind the leader

GT Daytona, which has seen the closest-fought battle so far, is currently being led by the No. 16 Wright Motorsports Porsche 911 GT3 R of Klaus Bachler.