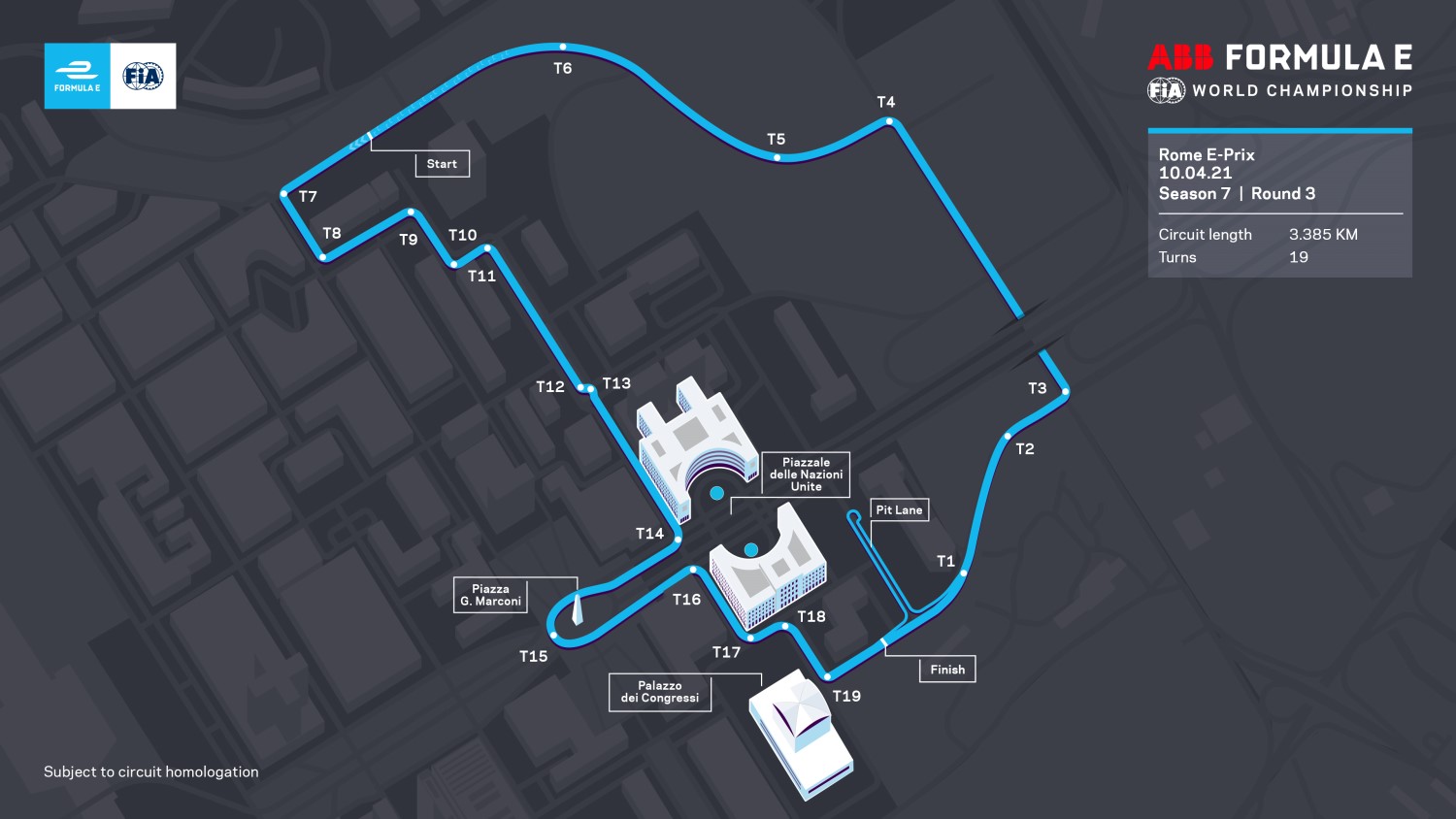 The Rome E-Prix, set for April 10, will showcase the Roman District’s spectacular, historic surrounds, with Formula E’s field of all-electric single-seaters piloted by 24 world class drivers to race front of the Palazzo dei Congressi, Piazzale Marconi and, starting from this year, the iconic Palazzo della Civilta Italiana, also known as the “Square Coliseum”. The entire Ninfeo Park will also form a part of the circuit’s perimeter.

Close collaboration with local authorities has delivered a layout – subject to FIA homologation – that retains the round’s character and strengthens Formula E’s legacy in the area.

“As always, we’ve created a real challenge – and in my opinion, one of the greatest layouts we’ve made yet,” said Formula E Sporting Director Frederic Espinos. “The first and most important thing was to create a track that caused minimal disruption for the city, so we have had a re-think of the area we’re using.

“We’ve managed to keep the character of Rome in this new layout, with its undulations, lots of elevation changes, surface changes and the on-track excitement we’ve always seen when visiting the city.

“Rome is quite unique for a street circuit on our calendar as it’s one of a handful with fast, sweeping corners and varying radiuses because of the roads that we have to work with. It’s a circuit that drivers will be able to make a real difference as a result.

“We’ve shown the plans to the drivers on our committee (Lucas di Grassi, Jerome D’Ambrosio, Oliver Rowland) and they were super excited because it’s a fast layout – very fast – and it’s definitely challenging.”

“With an almost completely renovated circuit design in Rome, both FIA and Formula E have once again done an amazing job in making Formula E even more exciting,” said 2017 Formula E Champion, Audi Sport ABT Schaeffler’s Lucas di Grassi. “The new layout is fantastic: it has longer and faster straights and offers more opportunities for overtaking. I’m sure the fans will love it; I can’t wait to race there.”

“On paper, we’re really pleased with it,” added Espinos. “There are quick sections with long straights into a corner before another quick blast then there are also tighter, slower speed sections that drivers will need to be on-guard for. Because of this, it’ll be a big compromise for the drivers and teams in terms of setup and strategy too – with different requirements around the circuit for energy consumption.

“We think there will be plenty of overtaking opportunities. The drivers always surprise us and throw the car into passes in places we didn’t initially expect when we laid down the design, too.

“It’s always a challenge to create a new track in Formula E. It’s not a complete blank sheet of paper here, as we share a few corners with the old layout, but it’ll be a lot to learn for the teams which will require drivers and engineers to adapt quickly. With any change to a circuit, they’re forced into totally rethinking their strategy of energy consumption and management.”

The layout opens up the use of Rome’s La Nuvola Convention Centre, brings businesses in the area into the fold and creates space for more spectators at future events. Restoration of the pavement in Via Murri – an area of historical importance to the city – and road resurfacing around the track will also strengthen Formula E’s legacy in Rome.

“We have strong support from the city to race in this area, we know it very well, and we’ve worked very closely with the authorities to solve any problems that existed before,” continued Formula E’s Sporting Director. “We’ve come to a solution to achieve a common goal and once again, we’ve adapted as required – even with the restrictions imposed upon us due to the global health situation.”