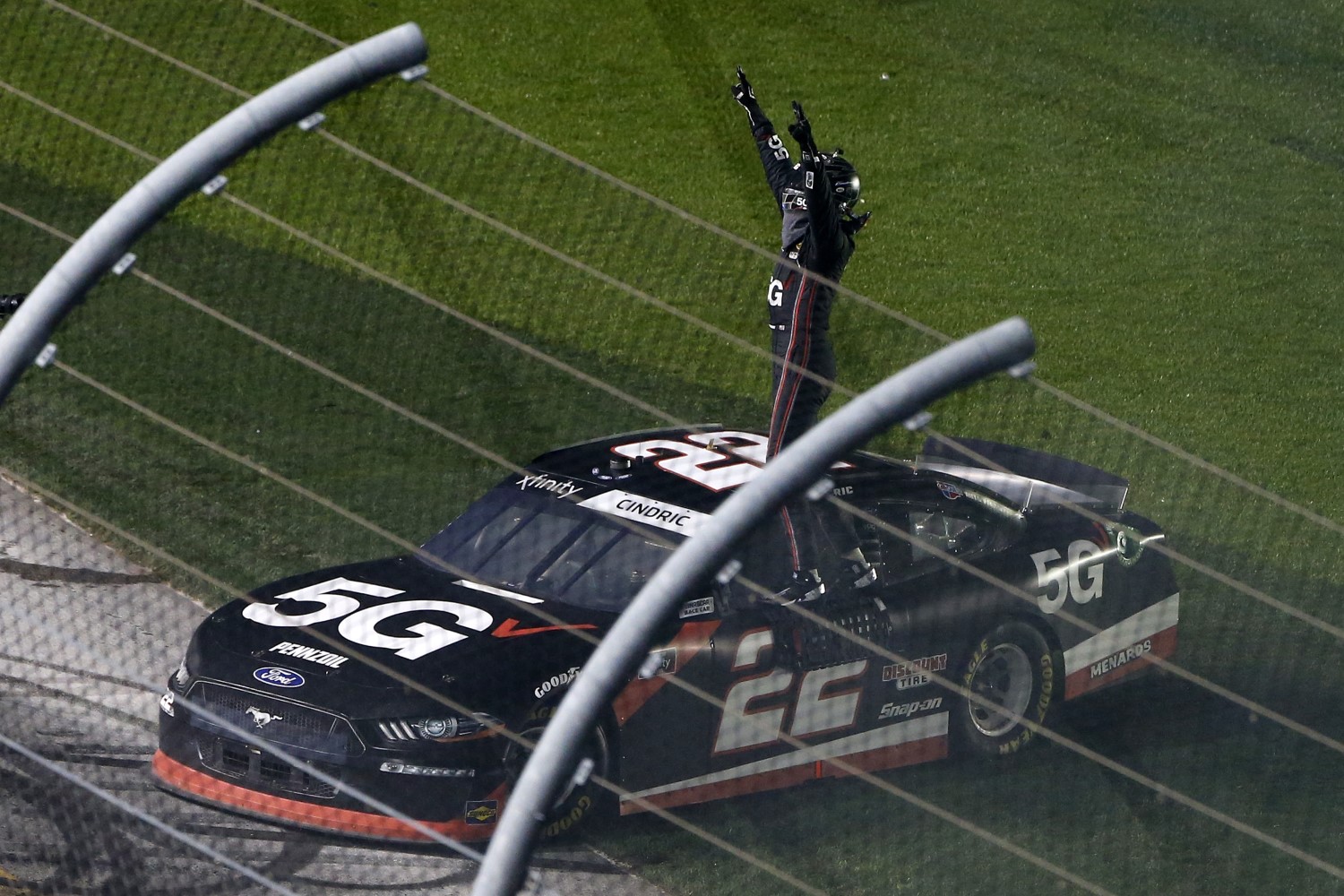 Cindric led 28 of the 122 laps, keeping his Team Penske No. 22 out front by 0.104 seconds at the checkered flag of the Beef. It’s What’s for Dinner 300. His ninth triumph of his Xfinity Series career was his first at the 2.5-mile Daytona track.

Moffitt held on for second place, his career best in the Xfinity Series. Cousins Harrison and Jeb Burton grabbed third and fourth, respectively, with AJ Allmendinger finishing out the top five.

“What an awesome race,” said Cindric, who will make his NASCAR Cup Series debut in Sunday’s Daytona 500. “What a really fast Verizon 5G Ford Mustang. Unbelievable effort by everyone at Team Penske.

“Obviously, coming off a lot of momentum winning that championship last year, but nothing is guaranteed and keep working hard. Congrats to my man, (spotter) Coleman (Pressley) up on the roof. He puts in just as much effort or more as I do. I’m proud of him, and we’ll try to go do it again tomorrow, I guess.”

The runner-up result was a career-best for Moffitt, who previously had one top five in the series, a fifth at Talladega.

“Once the 22 (Cindric) got up front, every time I got within a car length, I’d just push him farther forward,” said Moffitt, who chased Cindric in overtime time after taking over second place from Burton, the third-place finisher.

Jeb Burton, Harrison’s cousin, ran fourth, despite sustaining minor damage to the nose of his No. 10 Chevrolet in a three-car incident that caused the ninth caution on Lap 114 of a scheduled 120 and set up the overtime.

With 15 laps left, contact between the Joe Gibbs Racing cars of Ty Dillon and Daniel Hemric rewrote the story of the race. Dillon moved up the track between cars running in the inside and outside lanes, but when he tried to complete a pass of Hemric, he turned across the nose of Hemric’s No. 18 Toyota and spun, igniting a chain-reaction wreck that eliminated a handful of potential race winners and probable championship contenders.

Destroyed were the JR Motorsports cars of Justin Allgaier and Josh Berry and the No. 11 Kaulig Racing Chevrolet of Justin Haley, who was trying to win his fourth straight Xfinity Series superspeedway race—an achievement only Dale Earnhardt Jr. had accomplished previously.

“The 18 (Hemric) hit me so hard in the left rear, it drove me up the track,” said Dillon, who is racing in the Xfinity Series after four full seasons at the NASCAR Cup level.

Allgaier saw it differently. “He wrecked the whole field,” Allgaier said. “He had to make a statement… Unfortunately, guys were trying to make moves—veterans who should know better—and making bad decisions.”

On Lap 75, nine circuits after a restart to begin the final stage, the pit window opened, and all hell broke loose off Turn 4 as Cindric slowed at the front of a group of cars headed for pit road. Michael Annett was turned sideways across traffic in a nine-car wreck that wiped out Annett’s No. 1 Chevrolet and the No. 9 of JR Motorsports teammate Noah Gragson, the defending race winner.

“I got wrecked coming to pit road,” Annett said. “I waved them off 10 friggin’ times.”

Stage 1 winner Brandon Jones saw his fortunes change dramatically coming to the checkered flag to end Stage 2. Jones steered his No. 19 Joe Gibbs Racing Toyota up the track to side draft the outside lane, but when he returned to the bottom lane, his attempted block on Myatt Snider’s Chevrolet came too late, and Jones spun across the nose of Snider’s car.

After a wild slide through infield grass soaked by rain earlier in the day, Jones rocketed back onto the track and slammed nose-first into the outside wall. Cody Roper’s Camaro smashed into Jones’ car at high speed, and the spinning Toyota clipped the Chevrolet of Alex Labbe. All three cars were destroyed, and NASCAR red-flagged the race to clear the debris from the track.

Moffitt won the second stage, with Dillon and Cindric second and third behind him.

Only 22 of the 40 cars that started the race were running at the finish of a race that featured nine cautions for a total of 43 laps.