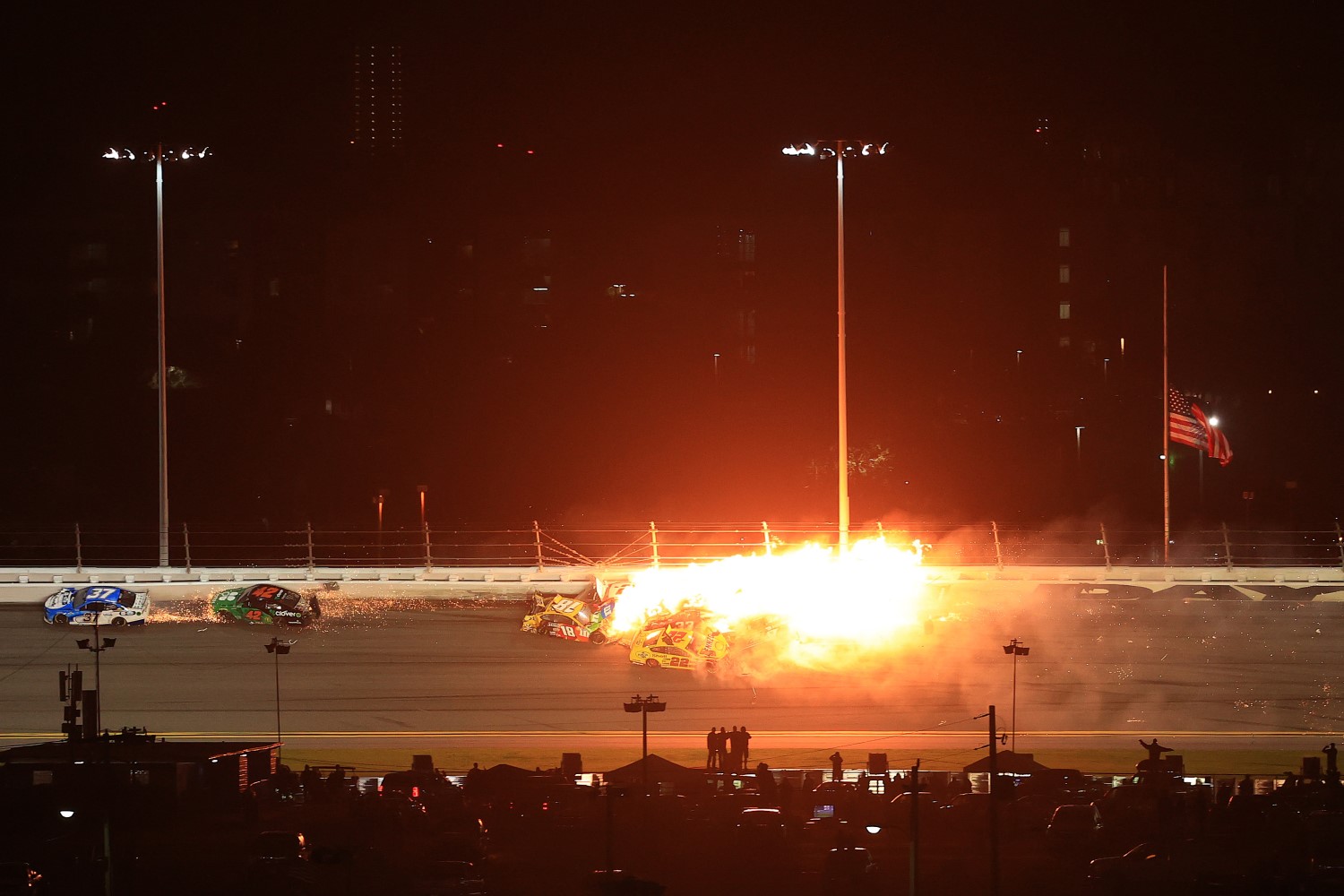 2nd place #2 Team Penske driver Brad Keselowski had a run on leader #22 Joey Logano’s Penske Ford on the final lap, in the final turn, of the Daytona 500.  But when Logano moved down to block his teammate, the two crashed hard and #34 Front Row Motorsports Ford driver Michael McDowell squeezed through the gap to win the Daytona 500, his first-ever NASCAR Cup win.

McDowell, who led only the last of The Great American Race’s 200 laps, started his career as an IndyCar driver for Paul Gentilozzi’s Champ Car team. He move to NASCAR after one year and spent many years in NASCAR working hard to get with a winning team, and it finally paid off after 357 winless starts.

“What a great way to get a first victory—in the Daytona 500!”

“I don’t think it was very close,” said Elliott.  “I kind of got next to him and I saw the lights come on, so I knew it was over right then. Just a huge thanks to NAPA, Chevrolet and everybody at Hendrick Motorsports. I felt like we had a fast car. We weren’t as good as I thought we were on Thursday. I felt like we did a really good job executing today. Staying out of trouble – that’s not something I’ve done a very good job of here in this race, so I’m glad we could at least finish this one and have something to build on for when we come back and try to do better.”

“Yeah, you know you’ve just got to be thankful to be around at those moments at the end,” said Dillon. “I pulled out to see if the bottom would work and just didn’t get enough of a run. It was close. I’ve got to thank all my sponsors like Bass Pro Shops and everybody that helps this program. We were here all weekend scoring points and that’s all I can ask for. Our team worked hard in the off-season with ECR power. What can I say? Chevy was really close. I had fun working with my guys tonight in the Chevy camp.”

Hamlin took the lead in the second stage after a cycle of green-flag pit stops and held it through the fifth caution of the race, which waved when Joe Gibbs Racing teammate Christopher Bell cut a left rear tire and spun into the Chevrolet of Ricky Stenhouse Jr.

At that point, Hamlin had led 58 laps, bringing his total of laps led in the Daytona 500 to 434, fifth-all-time and one ahead of Bobby Allison. Hamlin had led 34 consecutive laps to win Stage 1 after racing resumed on Sunday night. He finished with a race-high 98 laps led.

“I didn’t see (what happened at the end), I was too far back,” said Hamlin.

“We didn’t execute too good on pit road. It was just like the 125 (Duel race). We came out in front of everybody, and didn’t have any help to get up to speed. They all blew by us because they were single file, so it just took away the power that I got and that’s getting through traffic. The fact we came back to fifth there from 12th on the last couple of laps is pretty good. Dominant car.”

On Lap 14, before a long rain delay, off-center contact from Bell’s Toyota to the rear bumper of Aric Almirola’s Ford sent Almirola spinning near the front of the field, triggering a massive 16-car pile-up that inexorably altered the complexion of the race.

We were just getting pushed too hard too early,” Almirola said. “It’s a long, long race. Man, we were in a fine position, just sitting there riding around in the top two, three, and the 20 (Bell) just came with a big run and hit me really hard in a bad spot and it turned me to the right and tore up our race car and ended our Daytona 500 way too early.”

Collected in the wreck were: Ryan Newman, making his first Daytona 500 start since the devastating last-lap wreck that put him in the hospital a year ago; Erik Jones, in his first start in a points race for his new team, Richard Petty Motorsports; Daniel Suarez, in his first run with newly formed Trackhouse Racing, a joint venture between Justin Marks and rapper Pitbull; and pole winner Alex Bowman, whose No. 48 Chevrolet was wiped out when Almirola shot up the track into the side of his car and rammed it into the wall.

“It looks like the No. 10 (Almirola) kind of got turned sideways there, and I was the guy that got ran into,” Bowman said after an obligatory trip to the infield care center. “Bummer – I hate it for (sponsor) Ally. Obviously, we had a really fast Camaro. The Chevrolets were working good together; hopefully, a Chevy still ends up in Victory Lane.

“Hats off to everybody at Hendrick Motorsports; they built some really fast race cars. Hate that superspeedway racing works out that way sometimes, but that’s just part of the game.”

Five hours and 40 minutes later, after the rain abated and the track dried, engines were re-fired at 9:07 p.m., and the race resumed with 24 cars on the lead lap.

Ten of the 40 drivers were sidelined by a massive 16-car wreck on Lap 14, triggered by Christopher Bell’s nudge of Aric Almirola’s No. 10 Stewart-Haas Racing Ford at the end of the backstretch. Top qualifiers Alex Bowman and William Byron were collected, as were several others as the pack skidded into Turn 3.

Another look at the big wreck on the last la

All drivers have climbed out of their cars. pic.twitter.com/UmRtWoJ5YA

Seven drivers were unable to continue; three teams were done for the day after the Damaged Vehicle Policy (DVP) crash clock expired during their repairs.

The race was red-flagged for 5 hours, 40 minutes with 15 laps complete after rain and lightning hit the 2.5-mile track Sunday afternoon. The race resumed under green-flag conditions on Lap 30 at 9:34 p.m. ET, leading to an early Monday morning finish.

Major damage for the No. 2 😳 pic.twitter.com/sIENl1VaEc

“I had a run down the backstretch and everybody was kind of checking up in the middle so I went high to go around the outside,” said Kyle Busch.

“I figured guys would kind of blend back to the high side and the 2 (Brad Keselowski) car just landed on my hood. Came out of nowhere. Unfortunately,  got caught up in the wreck and banged up pretty good. Took a couple good licks, but just a matter of plate racing, I guess. For as far back as we were and what was happening, I don’t  think we would have won.

“I think we probably would have been maybe fourth or fifth so that’s about all we were going to get anyways. Just unfortunate day for the M&M’s Camry.  Hate it for my guys. It seemed like every time the points were being paid, we stumbled. First stage we went from second to outside the top-10 and then the second stage, we went from third to ninth. Then there at the end obviously, I felt like we had a top-five and finished 14th looking at the board there. Just a dismal day at Daytona, as usual.”

“It’s to be expected. It was just a matter of time before it all breaks loose and whatever happens, happens. I saw a window to the outside and all of a sudden I had the 2 (Brad Keselowski) on my hood. I don’t know.

“I felt like those guys were going to get bogged down on the bottom so I was trying to shoot for the top and get a run on the outside of them. That’s typically where everybody was going all night long and hopefully get a run off of (turn) four. I was just trying to shoot for a top-five. We were too far back to make anything happen for a win. We got clobbered there a few times obviously, and just fortunate that I’m all good. Our M&M’s Camry – that one won’t live on for another day, but hopefully, we will be back here next week and have a better go around on the road course and get back after it.”

In his first points race for the new 23XI Racing team co-owned by Denny Hamlin and Michael Jordan, Bubba Wallace ran near the front of the pack throughout the race but lost a lap with an unscheduled pit stop for a vibration on Lap 178 of 200. Wallace was caught up in the last-lap wreck and finished 17th…  Kyle Larson ran 10th in his first trip in the No. 5 Hendrick Motorsports Chevrolet… Austin Cindric’s strong Cup debut ended in the last-lap wreck that claimed three Team Penske cars… Ryan Preece, Ross Chastain, Jamie McMurray and Corey LaJoie claimed the sixth through ninth finishing positions, respectively.