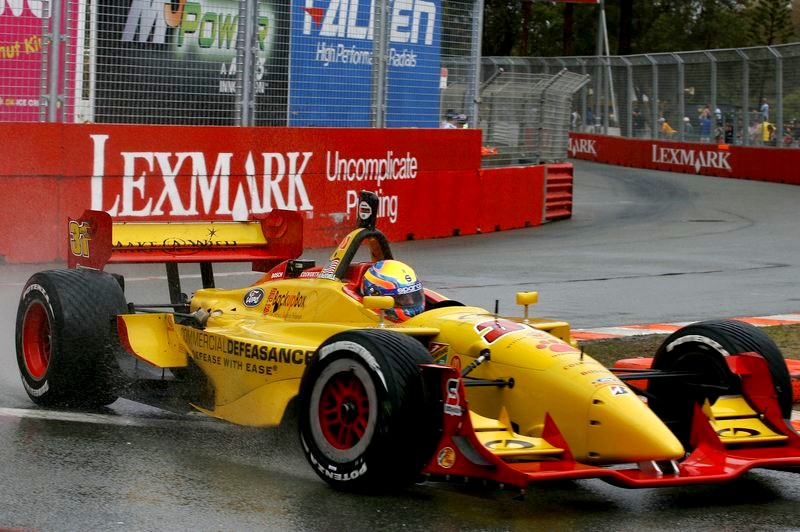 In the 63-year history of the Daytona 500, Mario Andretti and A.J. Foyt were the only Indy car drivers to capture a victory in NASCAR’s biggest race of the year.

That was until yesterday. Michael McDowell (shown above in 2005 on a wet track in Surfers Paradise, Australia), who started his career as an IndyCar driver in the Champ Car Series in 2005, became the 3rd one to do it.

McDowell, who led only the last of The Great American Race’s 200 laps, started his career as an IndyCar driver for Paul Gentilozzi’s Champ Car team. He move to NASCAR after one year and spent many years in NASCAR working hard to get with a winning team, and it finally paid off after 357 winless starts.

“What a great way to get a first victory—in the Daytona 500!”

Andretti Was The First

Andretti was the first to do it. Mario only ran the Daytona 500 three times, but his win in the 1967 edition in the Holman-Moody Ford schooled the NASCAR establishment.

Andretti dazzled the paddock throughout the day, leading 112 laps with a loose handling race car that only his incredible skill was able to control.

It wasn’t all smooth sailing. Andretti said his pit crew held his car longer on a final pit stop to allow Lorenzen, the NASCAR Golden Boy, to take the lead.

“It was absolutely intentional,” Andretti told Fox Sports. “They had orders to hold me and they held me back for about seven seconds. I was furious because they held the car up on the jack.

“It dawned on me what they were doing because the work was done. I knew that the tires were changed and everything else, and they’re all looking around, and they let him go, and he’s already almost in Turn 1 when they dropped me off.

“I put it in gear, and I was about ready to raise havoc, and that’s when they let the jack fly and I went. But I was a bit upset at the time, as you could imagine.”

A determined Andretti was not to be denied. He took the lead from Lorenzen four laps later and began to pull away. He led the final 33 laps and a late caution with two laps to go for Richard Petty’s blown engine solidified the first win for an Indy car driver in the Daytona 500.

“It was quite a feather in my cap quite honestly, and I was very proud of that,” Andretti said. “I represented the open-wheel dudes down there in a good way. I loved that part. And then A.J. joined me, and we are still the only ones that have done that.”

Foyt was the 2nd

Foyt’s win in the 1972 Daytona 500 driving the #21 Woods Brothers Ford was easy. He took the lead on the green flag from pole sitter Bobby Isaac. He held off an early charge from Bobby Allison but his biggest challenge came from Petty, who soared to the front after starting in 32nd and took the lead on Lap 20.

Foyt and Petty engaged in a duel over the course of the next 60 laps, swapping the lead nine times until Petty’s engine blew on Lap 80. The door opened for Foyt and he never looked back, leading 167 laps and crossing the finish line one lap ahead of Charlie Glotzbach.

“Anytime I won a 500-mile race, it meant a lot to me,” Foyt said. “Especially to go to Daytona, in their backyard, and beat them. It was a runaway the day I was there. We had such an advantage on everybody. The car handled perfect, the Wood Brothers did a great job pitting, so it was a good race. I really didn’t have that much competition. I felt like we were way ahead of everybody so it was a beautiful race all day long.”

“The drivers I ran against back then were pretty hard drivers,” he said. “I think they were a lot harder drivers than they are today. The reason I say that is the cars have so much downforce today where we didn’t.

“I know they’re running with restrictor plates now, but it was nothing to be qualifying over 200 miles an hour and your cars were almost a foot off the ground! Where now, they’re right on the ground with maybe an inch or so (of clearance). You had to drive your hiney off to keep one under you all day.”

NASCAR Drivers at the Indy 500

Although IndyCar drivers have taken NASCAR’s big prize three times now, a NASCAR driver has yet to win IndyCar’s big prize – the Indy 500.