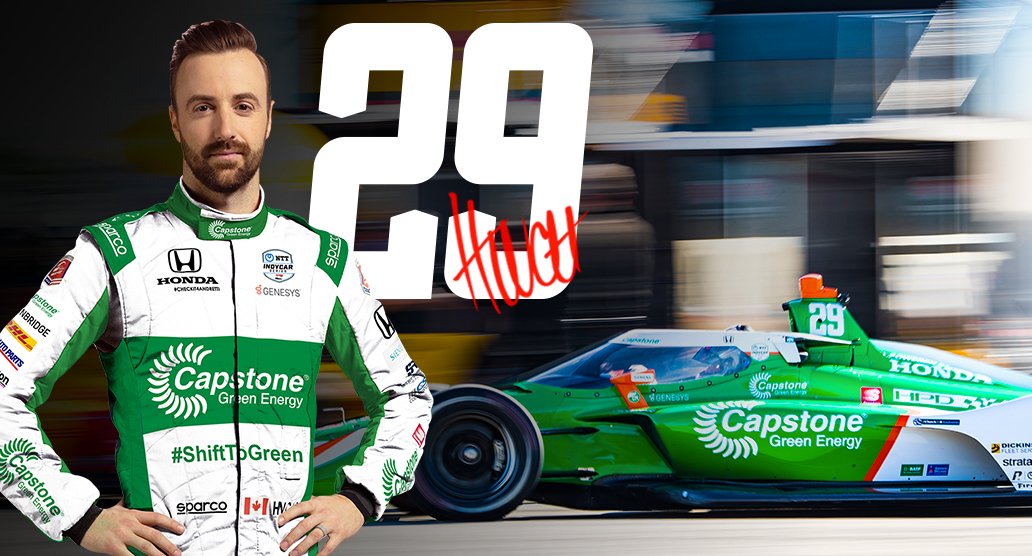 Andretti Autosport has announced today that the team will again join forces with Steinbrenner Racing to field the NTT INDYCAR SERIES entry piloted by James Hinchcliffe. Recognizable partner Capstone Turbine Corporation (www.capstoneturbine.com) (NASDAQ: CPST), the world’s leading clean technology manufacturer of microturbine energy systems, will return with their #ShiftToGreen campaign as the primary partner on the No. 29 Honda for six races in the upcoming 2021 NTT INDYCAR® SERIES season. Paired with Genesys, who was previously announced to primary 10 races with Hinchcliffe, today’s sponsorship confirmation further rounds out the season for the fan-favorite driver.

“We are looking forward to continuing to expand the winning relationship with Capstone Turbine and helping them grow green energy brand awareness by assisting them with new B2B introductions and expanding current relationships with other sponsors that are Capstone end users,” stated Michael Andretti, Chief Executive Officer and Chairman of Andretti Autosport. “We’re also pleased to welcome George and the Steinbrenner Racing team back into the Andretti fold. We’ll be working together on this entry for Hinchcliffe this year, as well as the Indy Lights car for Devlin DeFrancesco.”

The 2021 season will be Hinchcliffe’s 11th year competing in the NTT INDYCAR SERIES and his fifth in the Andretti Autosport stable. In his 145 starts, he has recorded six wins, one pole, 32 top-five finishes and has led a total of 781 laps. “I’m really excited to be joined up with Capstone for a handful of races in 2021,” said Hinchcliffe. “Working with a company that is essentially trying to save the world is such a cool experience. I think the need for green energy is very apparent and it’s something that affects and helps everyone. Being a part of educating people on what we can do better and how we can be better is something that’s really exciting. Obviously, the goal is to win and the best way to raise awareness is to get the #ShiftToGreen Honda into victory lane and tell people about what we’re trying to do. It’s also great to be working with George and Steinbrenner Racing. They’ve only been together a short while, but the results have come already and that speaks to the people in that organization, so I’m really happy to be in the Andretti Steinbrenner program”

“The Mayor of Hinchtown will now add Grand Marshal to the Capstone World to his resume. When he is not driving at 240 miles per hour on an INDYCAR circuit, James will be helping Capstone educate fans on the types of alternative energy sources that are accelerating the global shift to green energy,” stated Darren Jamison, Capstone’s President and Chief Executive Officer. “The energy landscape is changing, and we are excited to have James both behind the wheel and as our brand ambassador. The valuable business relationships we have developed with the support of George Steinbrenner IV and Michael Andretti offers Capstone a platform to reach the racing community and help more companies save money and lower their carbon footprint.”

The Capstone green and white livery made its NTT INDYCAR SERIES debut in 2019 on the streets of Toronto with Colton Herta and Harding Steinbrenner Racing and continued through the season finale at WeatherTech Raceway at Laguna Seca where Herta scored a victory from pole position. In 2020, the Herta sponsorship extended the relationship between Andretti Autosport and Capstone Turbine, which began at Texas Motor Speedway during the month of May in 2019 with driver Alexander Rossi who was the first INDYCAR driver to put Capstone Turbine on the podium with a second-place finish.

“We are very happy to continue our partnership with Capstone,” said George Michael Steinbrenner IV, owner, Steinbrenner Racing. “It has been a great journey taking this partnership from a single race sponsorship in 2019 to a strong and sustainable pact. Working with Capstone has opened our team to a world of green energy initiatives that we continue to seek to bring to the INDYCAR paddock.”

“Being able to continue into our fifth season partnered with Andretti Autosport feels like we’re keeping the family together,” added Steinbrenner. “It looks a bit different this year, but we are greatly looking forward to working with a great driver and human in James Hinchcliffe as well as continuing to maintain our success on and off the track.”

Capstone Turbine will serve as the primary partner on the No. 29 Honda at Texas Motor Speedway (Race 2), the INDYCAR Grand Prix, Mid-Ohio Sports Car Course, the streets of Nashville, Portland International Raceway, and the season finale race on streets of Long Beach.