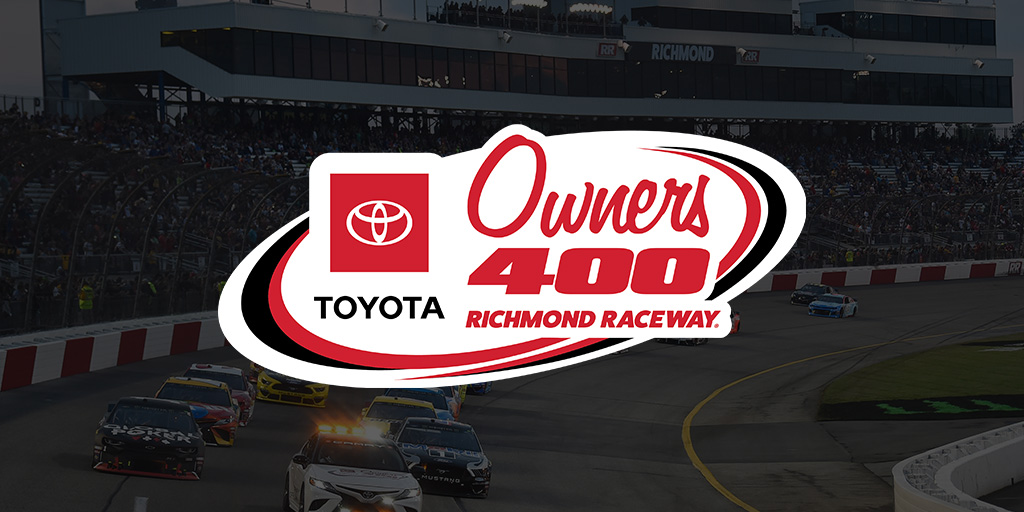 Richmond Raceway and Toyota renew their long-time partnership on the entitlement of the 2021 Toyota Spring Race Weekend with the Toyota Owners 400 NASCAR Cup Series race on Sunday, April 18 and ToyotaCare 250 NASCAR Camping World Truck Series race on Saturday, April 17. The partnership continues a tradition of thanking Toyota owners, along with the Richmond Dealers Association, that began in 2013.

“We are proud of our longstanding partnership with Toyota as we have collaborated to provide one of the best race experiences for loyal NASCAR fans and Toyota owners in the sport,” said Richmond President Dennis Bickmeier. “As we celebrate our 75th anniversary, we look forward to working closely with Toyota and the Richmond Toyota Dealers Association to continue to offer an unparalleled race experience fitting for this historic season.”

“Showcasing our ToyotaCare program and thanking all of our loyal Toyota owners through this great partnership with Richmond Raceway and the Richmond-area dealers is an important initiative for our company,” said Paul Doleshal, group manager of motorsports and assets, Toyota Motor North America. “We look forward to the continuation of the ToyotaCare 250 and Toyota Owners 400, and are also excited to get the chance to help Richmond Raceway celebrate their 75th anniversary as one of the best racing venues in the country.”

In a year that Richmond Raceway celebrates its 75th anniversary, the Toyota Owners 400 will be the track’s 66th annual spring NASCAR Cup Series race on Sunday, April 18 at 3:00 p.m. This year’s race will be the eighth Toyota Owners 400 after the 2019 edition was realigned due to the COVID-19 pandemic. Kyle Busch and Martin Truex Jr. of Joe Gibbs Racing have won the last two Toyota Owners 400’s in 2018 and 2019; each driver also swept the season at America’s Premier Short Track.

The Toyota partnership with NASCAR at Richmond Raceway has been one of the most successful entitlements in motorsports. Through the Toyota Spring Race Weekend, Toyota and the Richmond Toyota Dealers Association have collaborated with Richmond Raceway to share its gratitude to Toyota owners with special parking, dedicated gates for track entry, hospitality areas with immersive experiences in the midway, driver meet-and-greets, exclusive Toyota gifts and more.