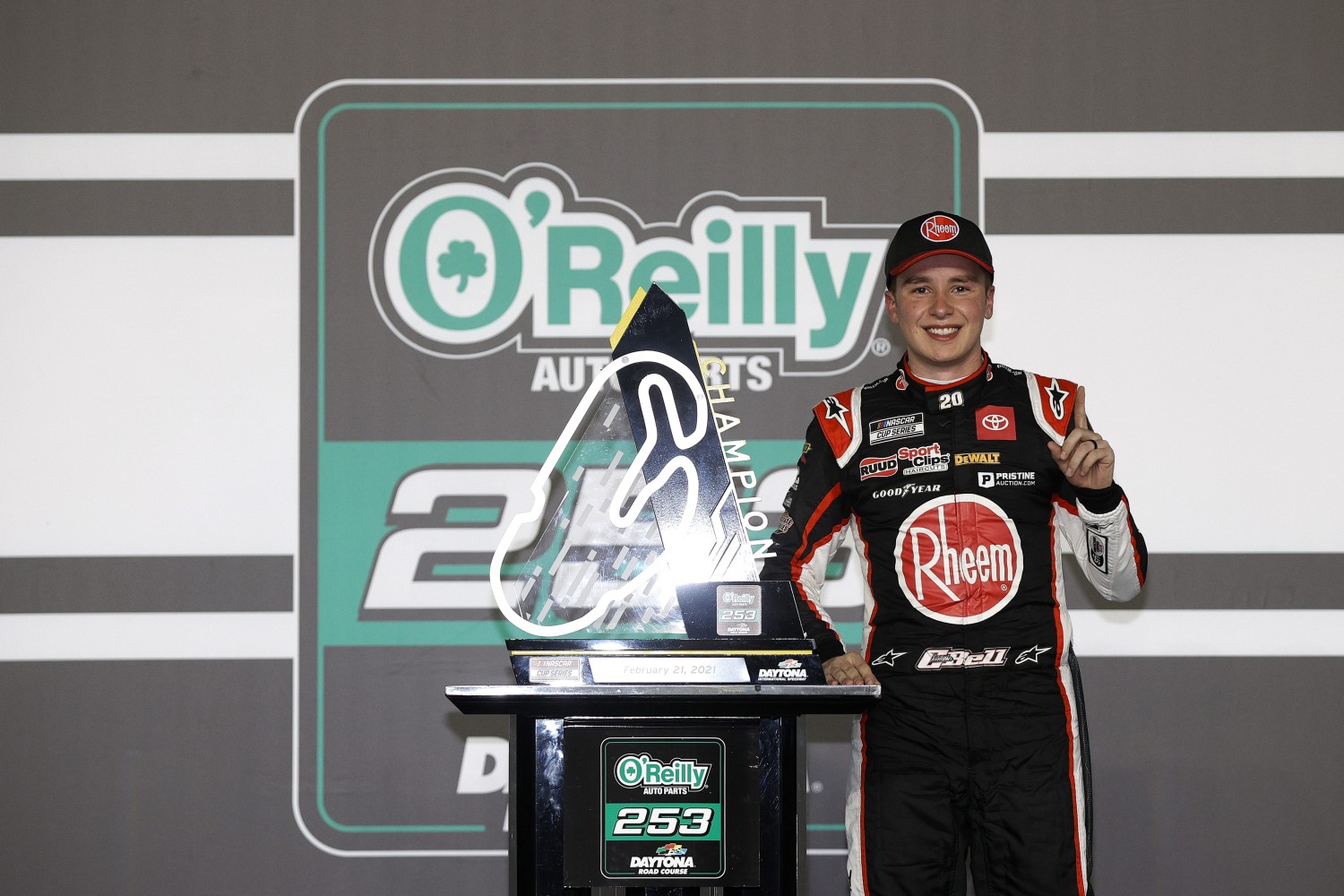 Joey Logano was leading on the last lap a week ago in the Daytona 500 at Daytona but then crashed out with his teammate in Turn 3.

This Sunday Logano led with one lap to go, but Christopher Bell drove past the #22 Pennzoil Penske Ford with one lap to go and pulled away to win the O’Reilly Auto Parts 253 on the Daytona Road Course by 2.119s in his #20 Joe Gibbs Racing Toyota.

Denny Hamlin was 3rd in the #11 FedEx Toyota.

Kurt Busch who came home 4th in his #1 Ganassi Chevy.

Logano’s Penske teammate Brad Keselowski rounded out the top-5 in his #22 Ford.

Chase Elliott won Stage 1 on Lap 16, leading all but one lap from the pole position. Bell is credited with a lap led in the race’s first portion.

Hamlin took Stage 2 on Lap 34. He led the last four circuits of the stage, taking the lead from Allmendinger.

Elliott’s No. 9 Hendrick Motorsports Chevrolet actually dominated the day overall, pacing the field for a race-high 44 laps. But with 12 laps to go, Elliott drove off track. He made a major save, but it dropped him back to 14th. A caution came out moments later, as Tyler Reddick’s No. 8 Richard Childress Racing Chevrolet ran into an off-track sign and set on fire in the grass.

Elliott worked his way back up into the top five, but with six laps to go, he tried to pull a crossover on Keselowski, and instead, Hamlin bumped him from behind and sent Elliott spinning. Elliott ultimately finished 21st, ending his road-course win streak at four.

How does this feel?
“I don’t know, this is definitely one of the highlights of my life so far. I’m just so incredibly thankful to be here at Joe Gibbs Racing with all of our partners – Rheem, DeWalt, Pristine Auction, Toyota, TRD. Thank you to Jack Irving and Tyler Gibbs. You guys believed in me since day one. It feels like I’ve prepared my whole life for this moment to race in the Cup Series. Last year was a huge learning curve for me, and I’m very grateful that I got the opportunity to run in Cup. It definitely prepared me to move for Joe Gibbs Racing.”

After you got past Kurt Busch with five to go, did you think you had a shot at catching Joey Logano?

“No, I really didn’t. Whenever we pitted and then we came out, I liked where we lined up, but then the yellows kept coming and I thought the yellows were hurting me because I felt like I needed laps to get back up through there. Honestly, I didn’t think I was going to get there, but Adam (Stevens, crew chief) up on the pit box kept telling me I was going to get there. I didn’t believe it, but he really struggled coming out of (turn) six one time and allowed me to close the gap. I just wish my wife was here to celebrate with me.”

Can you describe your emotions after getting your first career Cup Series win?

“I don’t know, it’s unbelievable. Watching last night and seeing Ty (Gibbs) win was such a special moment. I was so proud of Ty. Obviously Joe Gibbs Racing does a great job giving everybody great equipment. I knew that going into this year that I was going to have to perform. Just really, really proud to be here. Really proud for all of our partners at Rheem, DeWalt, Pristine Auctions – it’s a dream come true.”

With less than five laps to go, you had to make up more than three seconds. Did you think you could catch Joey Logano?

“I just kept doing what I was doing all day long. Whenever we took the green flag, I felt like I was really patient. Kyle (Busch) tried to go three-wide around me at the start. I knew that I was okay. Adam (Stevens, crew chief) kept asking what I needed in the car and I didn’t really need anything. Just took my time to get going, get up to speed and really proud to be here.”

How hard have you worked to get better on the road courses?

“It’s just seat time and experience and doing it. They’re a lot of fun. They’re fun to run. Last year, I guess the two years in Xfinity, we got a bunch of road courses run so that probably helped me out a lot. This year we got nine of them I think so better get good at it.”

What does it mean to be a winner at Daytona?

“The superspeedway has been horrible for me, but this road course, we should make this an every year event.”

“I was trying to keep him (Bell) behind me.  We gambled by staying out and I’d say it paid off overall, but you just hate being so close.  He started catching me a second a lap and it wasn’t like I blew any corners or anything.  We just got beat, plain and simple.  We’ve got to get our long run speed faster.  We made some gains and have gotten better with our Shell-Pennzoil Mustang.  We’ve just got to be able to find a way to keep our rear tires on these things on the road courses.  We’ve identified the issue, now we can go to work.”