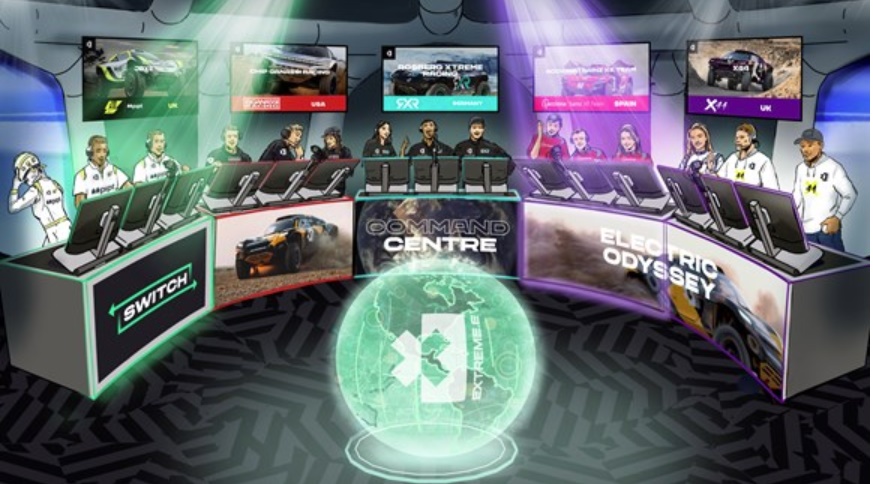 Extreme E, the new electric off-road series, today reveals its innovative ‘Command Center’ – a classic motorsport pit wall unpacked – which will play a focal role in the live race broadcasts, creating drama and atmosphere. Operating like a futuristic strategy room, this purpose built studio is where key team players will join together to watch the race unfold and make strategic decisions.

The series has partnered with live event production specialists, ADI, to deliver this cutting-edge Sports Presentation solution inside the Extreme E ‘Command Center.’ Its technical production design will help Extreme E achieve the look and feel of a state-of-the-art broadcast studio, despite the remote environments it travels to. The solution will feature 2mm indoor LED screens and LED lighting fixtures, set around an arc-shaped desk that will host representatives from five teams during the race including drivers, team principals and engineers, who will have access to team radio, TV feed and telemetry.

Westbury Gillet, Director at Aurora Media Worldwide, explains the concept: “Think F1 pit wall unpacked but turned in on itself, and we are filming from the inside. However, each team’s principal, driver and engineer will be all together in this one room so they will be interacting.

“With the screens and lighting it will be futuristic, like a spaceship, and this will be complemented by the audio, which will be triggered at key moments. We’ve modified desks by bringing down the three monitors from the high position to a 45 degree angle along with talkback panels. There will be a LED screen wall wrapped all around, which will house different content from the race. We will also have LED and strip lights to light up the teams and the architecture of the structure, so for example, if a team is using HyperDrive in the race, that teams desk will light up purple. In addition, there will be multiple remote cameras and microphones capturing the teams reactions, which will be broadcast live to viewers at home.”

Ali Russell, Chief Marketing Office at Extreme E, said: “The ‘Command Center’ is something completely new, and another fantastic innovation from the Extreme E team. It’s a really exciting proposition for race fans who will get to follow all the action and drama through the key players as it unfolds.

“It’s great to have ADI’s support in providing this concept as we plan and deliver this pioneering project across the most remote parts of the world. ADI brings unique qualities in technical infrastructure, Sports Presentation and operational delivery, which will create outstanding production values at the ‘Command Center’, and our live broadcast of Extreme E.”

A dedicated ADI team will be on-hand to manage and cue all audio, 4k video and lighting play-out inside the ‘Command Center’, utilizing a single software platform to run the show. ADI’s platform brings flexibility to the play-back, capable of supporting up to 40 layers of digital media across the fine pitch LED screens, and allows changes to the studio AV to be triggered by live action that happens during the race.

Thomas Taylor, Extreme E Account Manager, at ADI adds: “We’ve been able to offer Extreme E an innovative solution to its studio brief. We’re excited to be involved in this new venture that highlights the climate change challenges we face, and provide technical production concepts for broadcast that help engage global audiences.”