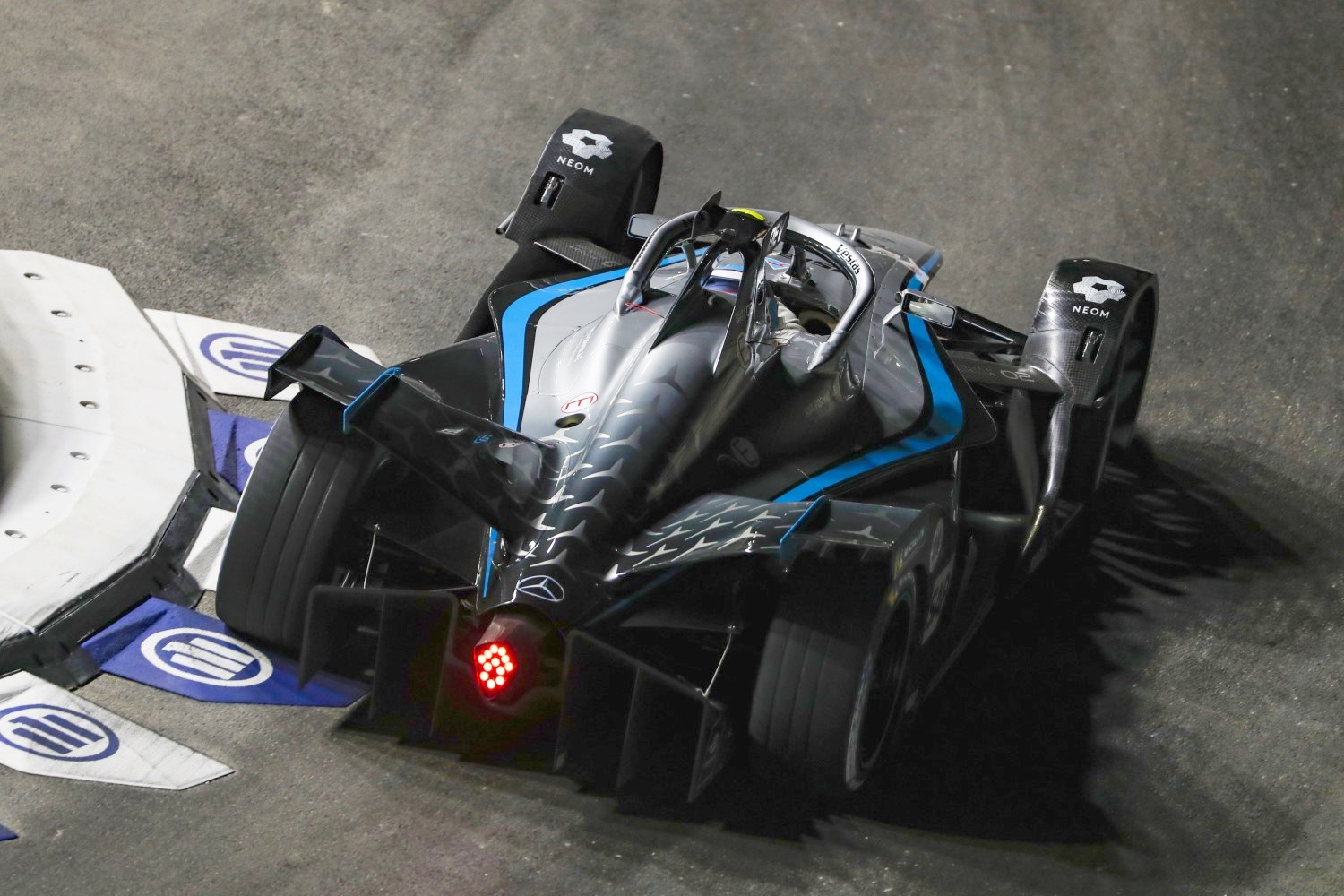 Nyck de Vries fired his Silver Arrow 02 to the top of the times in the first session of Season 7 with a late flying lap, as teams worked to get their heads around the Riyadh Street Circuit under the floodlights ahead of Formula E’s first night races on Friday and Saturday.

Porsche’s Andre Lotterer was first to set a real benchmark come the half-way stage, with his 1:10.369 blowing away the quickest ever lap here – a 1:11.479 set by 2019’s pole sitter Alexander Sims, then of BMW i Andretti Motorsport – albeit on a slightly modified circuit for 2020/21.

It didn’t last long though as times continued to tumble throughout – the dusty circuit clearing with each passing lap. Track surface evolution is a big thing in Diriyah. With the circuit conditions improving, Mitch Evans launched his Jaguar to the top of the pile by some 0.9 seconds, with drivers leaving nothing on the table through their full-power 250kW runs.

De Vries then sparked into life with five minutes to run, topping Evans by a further 0.7 seconds. That was enough to see the German set the session’s benchmark time, with Lotterer half-a-second back in second whilst Lucas di Grassi (Audi Sport ABT Schaeffler), Edo Mortara (ROKiT Venturi Racing), Oliver Rowland (Nissan e.dams) and Alexander Lynn (Mahindra Racing) rounded out the top six.

“It’s great to start like that,” said the Dutchman. “Its just the beginning, and it’s still a long weekend we’ve got ahead of us, but we’ve had such a long break from racing it was just a good feeling to be back in the car. Conditions were so different to what we had last year, obviously with the session running into the evening, but I felt comfortable as we worked through our plan and hopefully, we’ll be able to keep it up!”

Formula E looks set for its most intense season yet, with the quality and competition on the grid among the most fierce in world motorsport. Ten different teams were represented among the top ten on the timesheets come the end of the session, and that’s just a taste of what’s to come.

More to practice than lap times

For all the talk of lap times, though, they aren’t always the goal in practice.

Practice gives teams the chance to work through their systems, setups, FANBOOST and ATTACK MODE deployments, launches and energy management profiles to make sure everything’s working as it should be – and corresponds to their tireless simulator work.

Engineers are also working to understand Formula E in the dark, and the cooler circuit temperature that comes with it as the sessions will all run into the evening, rather than at peak Saudi sun as has been the case in prior years.

Another head-scratcher; teams’ tire allocation is 25 percent smaller this year for a single-race and by up to 50 per cent at double-header events – as in Diriyah. This could save up to 720 tires a season, with a 50 t CO2-eq, or 29 percent reduction in emissions.

After six months out of the car Formula E’s first night race finally here, and there’s plenty for drivers and their engineers to think about before Practice 2 at 14:00 tomorrow, followed by qualifying from 16:00 and the 2021 Diriyah E-Prix Round 1 at 20:03 local time.