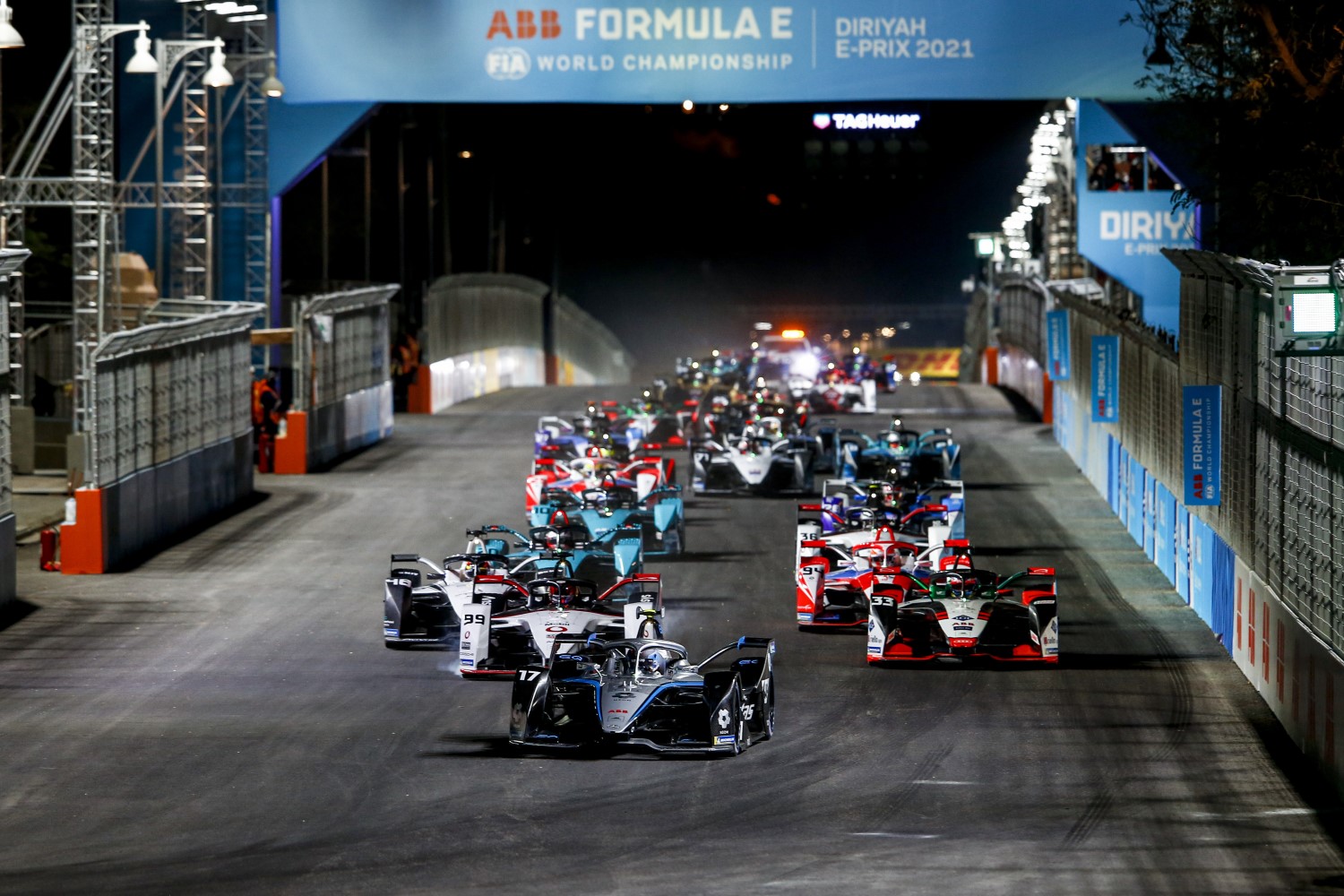 The Dutchman’s victory was picture perfect in the end, with de Vries handling Safety Car periods and pressure from behind to romp home four seconds clear of the pack.

De Vries launched well to cover the advances of Wehrlein and Rast, with the Audi driver pushing his compatriot for second place into Turn 1. A poor getaway from the Porsche man allowed the polesitter to build an early gap to the pack – some 1.2 seconds by the end of the first lap.

The lead group ran as you were with de Vries leading Wehrlein, Rast, Mortara, Evans and Alex Lynn (Mahindra Racing) the top six, whilst Jaguar new-boy Sam Bird made his experience tell as he got the jump on Maximilian Guenther into the chicane (BMW i Andretti Motorsport) for seventh.

Rast looked racy in the Audi right away, looking to apply the pressure on Wehrlein in second spot just ahead. De Vries responded to the pressure by setting and maintaining race pace – though retaining that one-second gap led to complaints of energy overconsumption.

The battle between Evans in fifth, Lynn sixth, Bird seventh and Guenther in eighth looked feisty, with just 1.5 seconds covering the quartet. Bird was able to make up more ground with a slice by the Mahindra setting him off after his teammate on Lap 8.

Approaching the half hour, Rast’s engineer gave the German free reign to attack Wehrlein for second. A typically elbows-out move from the DTM champion saw him around the outside of the Porsche into the chicane. Wehrlein leapt for ATTACK MODE immediately to try and muster a response, following de Vries who’d already jumped for his first 35kW boost out front.

Rast held de Vries honest despite the Mercedes-EQ running in ATTACK MODE, with the Audi driver electing to make use of the full 235kW on Lap 14. Mortara had his full complement of power deployed, too, and having made his way up to fifth, dispatched Wehrlein and Evans into the chicane for third in a stunning three-wide double pass.

De Vries got things back underway with less than 15 minutes plus one lap left to run, and immediately put the hammer down to steal 1.7 seconds on those behind.

Just a couple of laps later, Guenther got it all wrong through Turn 2 which ended with the BMW sideways and into the wall with a big hit and in need of recovery and springing the Safety Car once again. De Vries had just used ATTACK MODE number two with Rast and Evans following – allowing Mortara to steal second. But, importantly, the pair had already taken the lap time hit of going off-line for their second and final ATTACK MODE activations under the sanctity of the Safety Car.

Rast was able to grab track position back when Mortara swept right at the chicane for a second shot of ATTACK MODE but the battle was now on with the Venturi 35kW to the good over the Audi until the conquered flag. Rast couldn’t fight for long, though, with the Swiss moving out of the Audi’s slipstream on that long back straight to retake second. Mitch Evans followed a lap later with a carbon copy maneuver on the German for third.

De Vries’ victory was “chilled” as he crossed the line with plenty in hand, whilst Mortara followed in an impressive second with Evans holding firm for third, despite Rast using every trick in the book to get by. Wehrlein was next in fifth and a last lap move from Rowland saw Sims steal sixth. Vandoorne, di Grassi and Turvey – with a point in Round 1 breaking NIO’s Season 6 non-scoring hoodoo – completing the top ten. Rast, meanwhile, sealed an extra point by setting the TAG Heuer Fastest Lap.

“I’m still quite chilled I don’t know why! I should be over the moon,” said de Vries in-car. “It’s my first Formula E win,” he continued. “I’m very pleased with everything so far and it’s so satisfying to translate that into the race because it wasn’t easy with so many Safety Car periods and the pace being unpredictable at the beginning of the race. There was a lot of communication going on and I’m so pleased to get my first win.

“We were under and over consuming our energy. I got told Rast was a percent up but the team kept me calm and we got there in the end. It sounds cliche, but it couldn’t be more true – thanks to everyone at the team that has worked so hard for this.”

“I’m a dad and 34 years old!” added Mortara. “When I’m in the car doing these moves my heart stops! Wehrlein moved at the last minute so I had to go on the left as I was quite surprised. It was the key moment of the race and I was really happy to survive the chaos and finish second. It’s exciting. Mercedes’ has learned so much from the first year and we’re benefiting from their work over the winter time and we will keep on fighting.”

“It’s been a crazy day”, said Evans. “Qualifying was okay and the Super Pole stuff was an unexpected turnaround that put us in a better position. The Safety Cars didn’t help us too much and the time was ticking down so it was getting nerve-wracking but it was an incredible finish for us. There’s so much work that’s gone on behind-the-scenes and it feels really nice. It was a tight finish on energy there with Rene (Rast) but luckily it played into my hands in the end.”

Formula E’s back to do it all again tomorrow, with Round 2 and more dicing in the dark from Diriyah’s Riyadh Street Circuit and a second jolt of electric street racing to launch the 2020/21 campaign.

Ian James (Team Principal):
“Nyck has put in an excellent performance here, starting with the first free practice session. We were able to see what a strong contender he is over the course of last season, and it’s great that he’s now managed to translate that into his first Formula E win. I think it’s fantastic that he’s been able to show what he’s capable of here. It was a great performance from Nyck.

Stoffel likewise drove a very strong race. He faced the additional challenge of being in the first qualifying group. We decided not to take any risks and sent him out on the track straight away. That put him at an even bigger disadvantage.

But ultimately, Stoffel performed well, setting the second-best time in his group. In the race, he was then able to implement our strategy very skillfully. Tomorrow, we’ll get another opportunity to go on the attack. Let’s wait and see what we can do then.

We shouldn’t read anything into the gap to our opponents after the first race of the season. We are well aware of how competitive all the other teams are and how performance and circumstances can change from race to race. All in all, it’s been a good start to the new season, but tomorrow we start all over again.”

Nyck de Vries:
“My first victory in Formula E! What a fantastic result and a perfect start to our second season. I don’t know why, but I was quite calm after the race despite the pleasure of winning. It’s been a great weekend for me so far, setting the fastest time in every session and then winning the E-Prix itself. That’s obviously a very nice feeling, but it was by no means an easy race. There were so many safety car deployments, and it was difficult to always select the right energy management. It took a lot of communication with the team, but it’s great that I was able to come home with the win in the end. Many thanks to the whole team. I know it sounds like a cliché, but everyone in our team has worked very hard over the winter to get us up here on the podium today. So again, a huge thank you to the whole squad for their tireless work. You’ve earned this victory.”