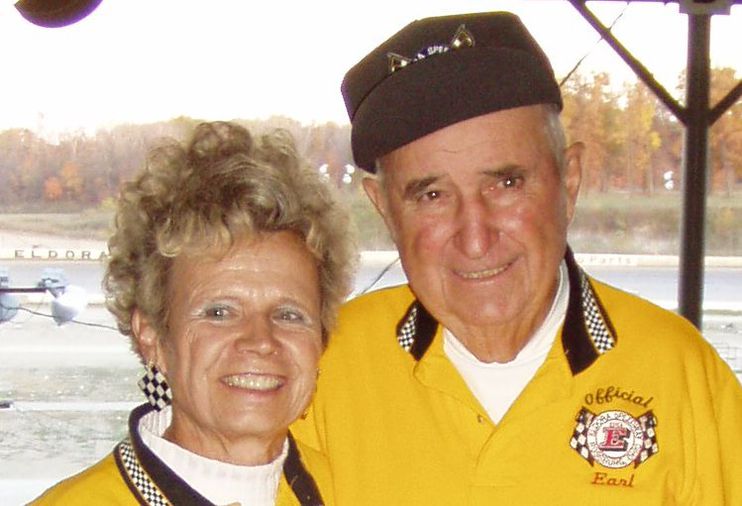 ROSSBURG, Ohio (February 25, 2021) – Berneice Baltes, forever known as Eldora Speedway’s First Lady, passed away Wednesday evening at her home in New Weston at the age of 93 (shown above with her late husband Earl).

She was born on August 29, 1927, in St. Henry, Ohio, to the late Ferdinand and Isabella (Tobe) Moeller. In addition to her parents, Berneice was preceded in death by her beloved husband, Earl Baltes, whom she married on April 26, 1947; her brother, David Moeller; her brothers-in-law, Nicholas, Ralph and James Baltes; and her sisters-in-laws, Zelma Ernst, Rita Condon and Bertha Siegrist.

Berneice, and her late husband, Earl, founded Eldora Speedway in Rossburg, Ohio in 1954, and grew it from its humble beginnings to international renown and home to some of the largest events in the world.

For nearly 50 years, Berneice managed the concessions and operated the Eldora Ballroom. Her pioneering menus and methods of serving the speedway’s large crowds made her a popular panelist at the annual Racing Promoter’s Workshops. Berneice was a member of the Dayton Auto Racing Fans, the National Sprint Car Hall of Fame, and was named the “Woman of the Year” by United States Auto Club (USAC). Berneice loved racing and the racing community.

Following the sale of Eldora to motorsports entrepreneur, Tony Stewart in November 2004, she remained a fixture at Eldora’s events and insisted on standing for the National Anthem.

A classy lady who kept up with the latest in fashion and interior design, Berneice also enjoyed tending to her landscape, especially her flowers. She also had a love for music, especially Big Band, which was a passion she shared with Earl.

Berneice was an active member of St. Bernard Catholic Church in Burkettsville, where she was a part of the St. Bernard Lady’s Guild.

Berneice is survived by her children, Starr (Joe) Schmitmeyer, and Terry (Dee) Baltes; her grandchildren, Chad, Tess, Joey, Josh, Kate, and Tish; her 13 great-grandchildren; her brother, Norman (Pat) Moeller, and her sister, Jeanette Fullenkamp; her sister-in-law, Susie Barga; and numerous nieces and nephews.

A Mass of Christian Burial will take place at 10:30 AM on Wednesday, March 3, 2021, at St. Bernard Catholic Church in Burkettsville, with Father John Tonkin and Father Santiago Gaynor as concelebrants. Burial will follow in St. Bernard Cemetery.

Memorial contributions may be given to the D.A.R.F. Injured Drivers Fund, 1361 Edinburg Drive, Troy, Ohio 45373.

Online condolences may be shared with the family by visiting www.tributefuneralhomes.com.

“Berneice was a wonderful lady who supported me as fan in my dirt days and as I moved to IndyCar and NASCAR. It was an honor when she and Earl called me that spring morning in 2004 to come and discuss their idea for the future of Eldora. Over the years, they were both so gracious with advice, support, and we never made a major decision without consulting them.

Some of my best memories of Eldora include pulling into the track early in the week – before you’d see Earl on the track or Berneice in the concessions – you’d see laundry on the clothesline at their house right out front. It was a great reminder that these two people built something that can never be recreated right in their backyard – and that’s why the statue at Eldora’s main entrance is of the two of them, arm-in-arm, welcoming everyone to their place.”