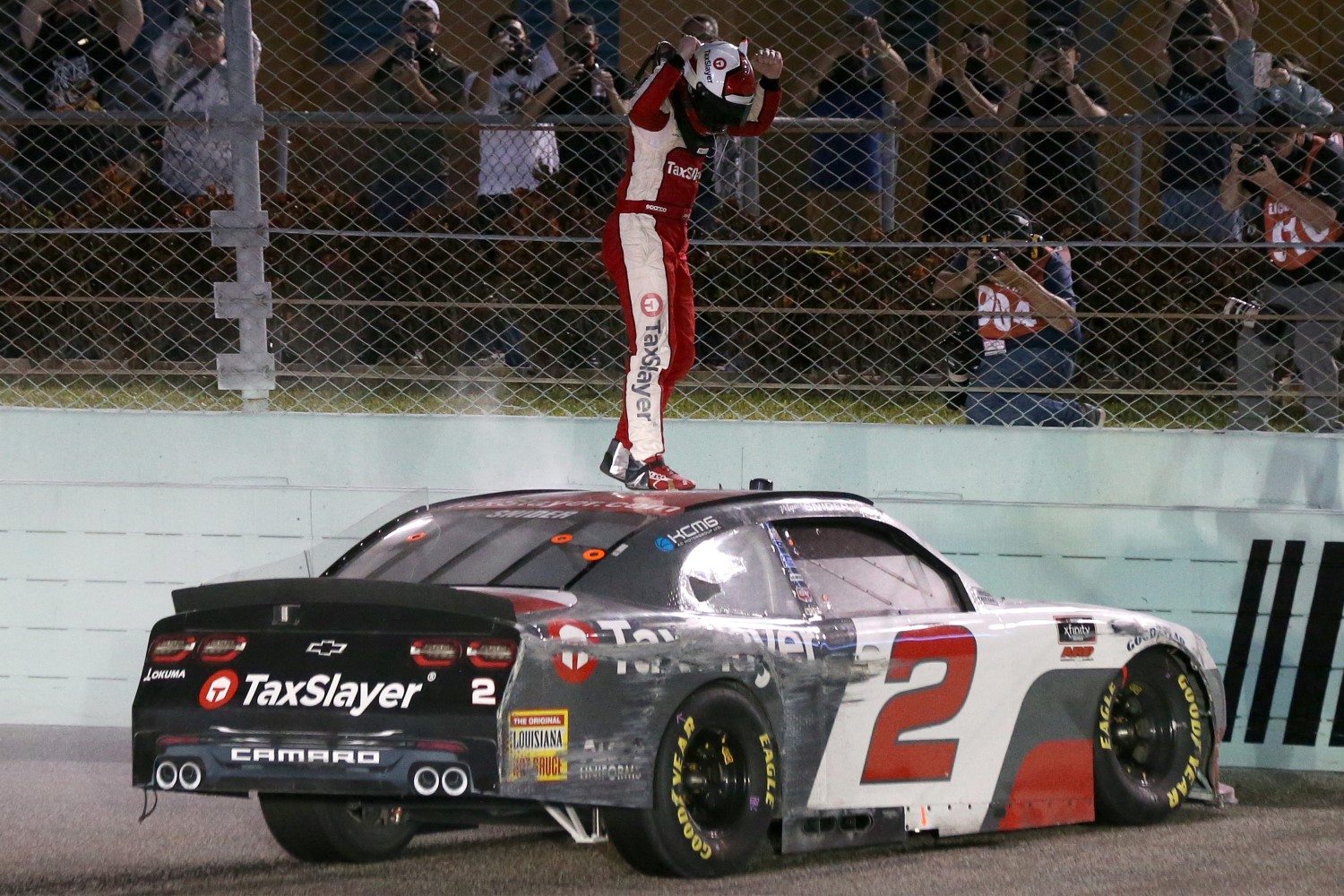 Snider took the lead on the second overtime restart and held off Tyler Reddick to score th win.

It marks the second week in a row the series has had a first-time winner after Ty Gibbs’ victory last week on the Daytona road course.

For his third straight race at the 1.5-mile track, Gragson was close enough to taste victory, but it was his ill-fated crash with just over two laps left in regulation that set up overtime and Snider’s victory.

On the first attempt at extra laps, Snider spun his tires, and Reddick grabbed the lead before AJ Allmendinger spun toward the infield grass in Turn 1 to cause the eighth and final caution.

In the second overtime, Reddick returned the favor, and Snider pulled clear in the bottom lane. With a determined charge on the final lap, Reddick gained ground, but he was .085 seconds in arrears when Snider crossed the finish line in the No. 2 Richard Childress Racing Chevrolet.

“Yeah, I guess I learned my lesson on that first restart, ‘cause I spun the wheels,” said Snider, who won in his 36th start in the series. “Then I saw Tyler spin the wheels on the next one, and I knew I might have a chance.

“Just a shout-out to all these RCR guys, (sponsor) Taxslayer, all these people that supported me over the years. It’s been a rough journey, but we’re here with a win, and I can’t complain.”

Reddick, who drives full-time for RCR in the NASCAR Cup Series, was moonlighting with RSS Racing on Saturday, making his first Xfinity start since winning his second straight series title at Homestead in 2019. The end result didn’t last long, however, as the No. 23 was disqualified during post-race inspection for failing rear heights.

Gragson was just over two laps away from a redemptive victory when the No. 13 Ford of David Starr — the last driver on the lead lap — blew a right front tire and shot up the track into the outside wall and right into Gragson’s path.

Gragson, who led 83 and 81 laps in last year’s two Homestead races but failed to win either, couldn’t avoid the collision that destroyed his No. 9 JR Motorsports Chevrolet. At the time, Gragson led second-place Reddick by more than eight seconds.

“What are you going to do,” Gragson said after a visit to the infield care center. “We dominated the last three races here, including this one, and have stuff like that (happen). We were saving fuel. I was half-throttle the last 30 laps, and we were still pulling away.”

The first stage of the race was eventful—but not primarily for Stefan Parsons spin in Turn 4 on Lap 26 or for Daniel Hemric missing his pit stall under the resulting caution and knocking his tire carrier to the pavement.

What Stage 1 demonstrated with jarring clarity was the enormous value of fresh tires on the abrasive asphalt surface. Allmendinger restarted 25th on fresh tires with 10 laps left in the stage and grabbed the lead from Kaulig Racing teammate Justin Haley eight laps later.

Allmendinger won the stage with Haley second after restarting 20th and moving into the lead on Lap 33 before surrendering the top spot to his teammate. Reigning series champion Cindric, on the other hand, stayed out during the caution, restarted in the lead on old tires and fell to 14th by the end of the 10-lap run.

Stage 2 was the mirror image of Stage 1. When fluid from Parsons’ car necessitated the third caution of the race on Lap 68, drivers who had stayed out under the Lap 26 caution to save a set of tires came to pit road—Cindric among them.

Allmendinger led the field to the restart with six laps left in the second stage. Cindric restarted 22nd, and in less than three laps took the lead on the way to a stage win and a Playoff point.

Pit stops followed at the end of the stage, on Lap 83, leaving almost all drivers on equal rubber for the final run, with two sets of sticker tires left in the pits. But in terms of track position, the exchange favored those who had pitted late in Stage 2 and charged to the front.

First off pit road during the fourth caution, Cindric led the field to green on Lap 89. But neither Cindric nor Allmendinger was a major player in the overtime. As a result of Reddick’s disqualification, Brandon Jones was second, followed by Hemric, Jeb Burton and Cindric. Haley, Brett Moffitt, Ryan Sieg, Jeremy Clements and Josh Berry completed the top 10.

Xfinity stalwarts Harrison Burton and Justin Allgaier were the first two drivers out of the race, Burton with and engine failure and Allgaier after contact with the Ford of Riley Herbst on Lap 98.