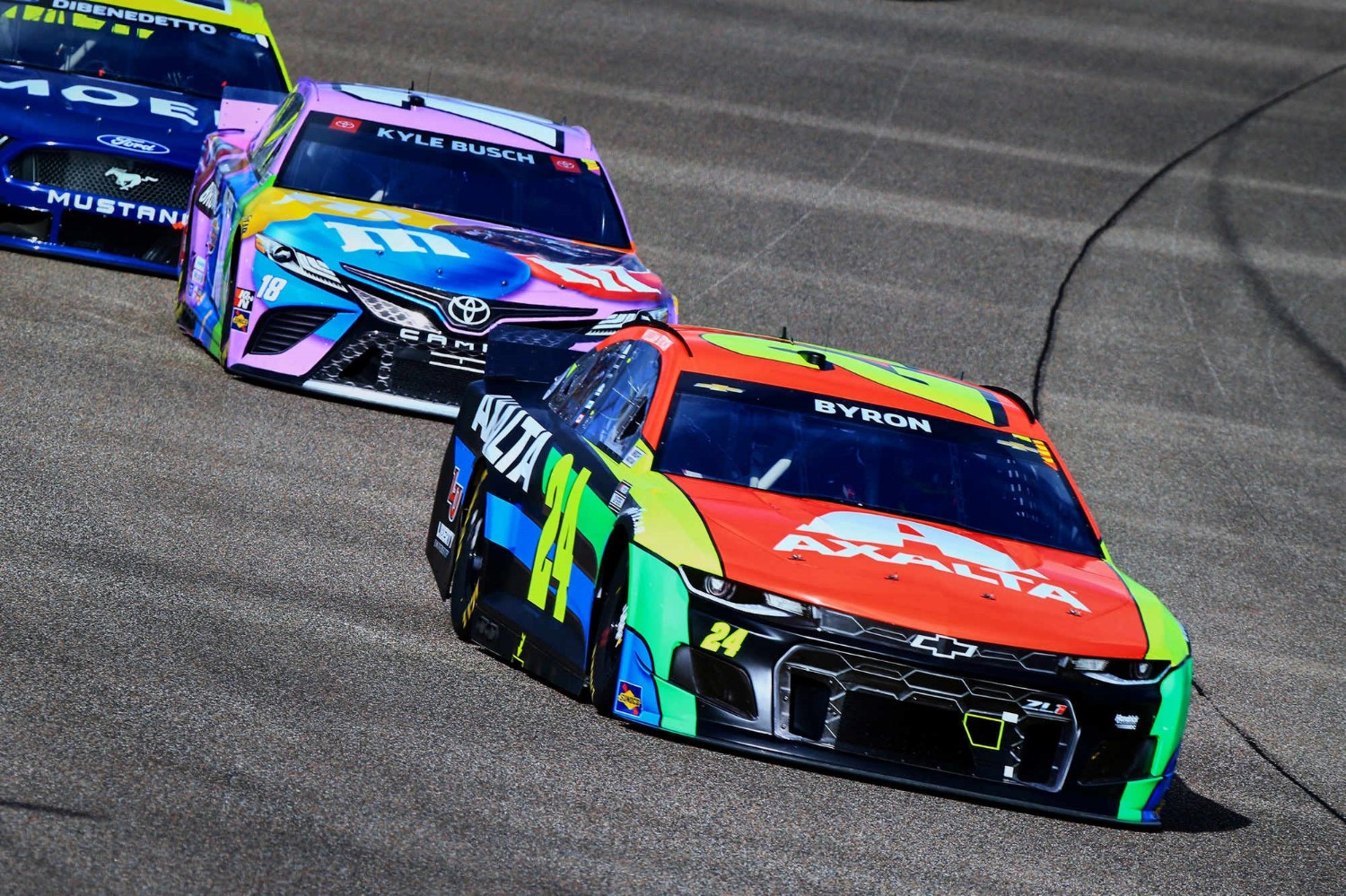 His first win also came within the state of Florida — at Daytona International Speedway last year in the regular-season finale.

Kyle Larson and Kevin Harvick rounded out the top-5.

Byron delivered the first Cup victory to crew chief Rudy Fugle, with whom he teamed to great success in the NASCAR Camping World Truck Series. In fact, the last time Byron and Fugle worked together, they won the 2016 season finale at Homestead.

Reddick didn’t score a point in either of the first two stages, but his No. 8 Richard Childress Racing Chevrolet was lightning fast at the end of the race. When Reddick moved into fourth place past Kevin Harvick on Lap 254 of 267, he was nine seconds behind Byron. By the end of the race, despite having to clear both Truex and Larson for second, he had trimmed more than six seconds off Byron’s lead.

“Second’s great, but I saw how much faster I was than those guys at the end, so naturally, it’s frustrating.”

Chris Buescher was dominant early, leading a career-high 57 laps in a single race and picking up the second stage win of his career in the opening segment. But as the sunlight faded, so did Buescher’s No. 17 Roush Fenway Racing Ford. He finished 19th.

Truex thought his car capable of maintaining Byron’s pace in the final run and was disappointed when it didn’t.

“On that last run, for whatever reason, I was just babying it,” Truex said. “The 24 (Byron) got the lead from me on that (last) restart (on Lap 208), and then the 5 (Larson) got by us, and I’m just biding my time waiting for them to start coming back to me, and they just never did.

“They obviously were really fast at the end, and we weren’t quite as good that last run. These things are so hard to win. These cars are so touchy and just needed one more adjustment to have a chance.”

Byron ultimately led a race-high 102 of the 267 laps around the 1.5-mile South Florida track. There were 19 lead changes overall among nine drivers.

Byron then steered his No. 24 Chevy to the Stage 2 green-white checkered after leading just two laps between Lap 80 and 160. Byron made the most of a late-stage restart to pass Truex and Denny Hamlin, who took the green ahead of Byron. Hamlin was 11th at the finish.

Caution wise, there was only one apiece in the first two stages. Both were for fluid on the backstretch, from two different cars.

On Lap 199, Aric Almirola slid up into Ryan Blaney, which both the No. 10 Stewart-Haas Racing Ford and No. 12 Team Penske Ford into the wall. The rest of the race remained green.

Hamlin retained the series lead by 20 points over Harvick.

FROM 31st TO 1st, YOU LED 102 LAPS. WHAT CAN YOU SAY ABOUT THE PERFORMANCE OF THIS RACE TEAM AND YOUR CREW CHIEF, RUDY FUGLE, WHO WINS FOR THE FIRST TIME IN ONLY THREE RACES?

“Yeah, that guy has been huge for my career. He’s the reason I’m here and I’m glad we could get him. He’s just awesome. This whole team did a phenomenal job. Everybody. The pit crew, over the wall, we’re extremely blessed. Thanks, God, for all the things that it takes to get to this level. Great boss in Mr. Hendrick and Jeff Gordon, and Axalta. This car looks really cool. I’m can’t even believe it, honestly. It was just a really smooth day. And we worked hard in the Winter on this track. I can’t believe it.”

“Well, finishing second is a good night considering how the first two weekends of the season have gone, but I hate that I didn’t get this Cheddar’s Scratch Kitchen Chevy into Victory Lane because if I would have then I would have gotten a lot of people in America free chicken tenders on Monday night. Once I really saw how fast we were in clean air at the end of the race, and I saw how fast we were catching everybody it became beyond frustrating because I know just two or three different decisions on a restart would have put me miles ahead. I knew that we were going to have to have a well-executed restart. We didn’t do that, and it takes time to get around all of those cars who pass you on a restart because they are all really good drivers. That’s the difference. I thought we would be better in the day and everyone would catch up at night, but it was the opposite of that. We tried to work on our Cheddar’s Scratch Kitchen Chevy throughout the night. We learned a lot. You have to win these races by being very consistent and making the right calls as a driver and as a team. I’m proud of how fast we were at the end of the race.”

How much did the track change for you once the sun set?

“The track changed a lot. Our Bass Pro Shops Toyota Camry was really fast at times. At times a little bit off. On that last run, for whatever reason, I was just babying it. The 24 (William Byron) got the lead from me on that restart and then the 5 (Kyle Larson) got by us and I’m just biding my time waiting for them to start coming back to me and they just never did. They obviously were really fast at the end and we weren’t quite as good that last run. These things are so hard to win. These cars are so touchy and just needed one more adjustment to have a chance.”

Do you plan to talk with your teammate, Denny Hamlin, about the incident earlier in the race?

“I’ll ask him (Denny Hamlin) what happened. I don’t know if he just landed in the corner and got on the splitter or what. He just went straight and gave me nowhere to go, about ran me into the wall. Racing deal, but hopefully we can avoid those things as teammates.”

What were you lacking at the end of the race to contend for the win?

“I felt like that last run, for whatever reason, it just didn’t do what it had done all day. The 24 (William Byron) and the 5 (Kyle Larson) got by us on that restart and I was just going to take care of it here and this is going to be a really long run. That’s where we were strong all day and it just never happened. My balance got off there in the last 40 laps or so and the car wouldn’t do what it did earlier. So close. The guys did a great job. It was a good, solid effort for our Bass Pro Shops Toyota Camry. Just proud of everybody for working hard. It’s definitely something we can build on.”

“It got pretty intense there at the end. I was just trying to take care of my tires and was just struggling on the long runs. We were loose for a majority of the race and in that last run, we actually got kind of tight. But I felt like being tight was better for my long runs than loose, just because I could be a little more confident. I would have liked to finish second, but those guys were better than me in the end and I just couldn’t hold them off. I hate that I gave up those spots. But it was a good day for the NationsGuard Chevy team. Congrats to William Byron. It’s really cool for William to get a win this early in the year. Hats off to their team and hopefully we can get it done soon.”

YOU SAID THIS RACE WAS GOING TO BE WON UNDER THE LIGHTS ON THE BOTTOM OF THE RACE TRACK. HOW MUCH EMPHASIS DID YOU PUT ON STAYING OFF THE WALL FOR THIS RACE?

“You had to go with the wall at certain times; (Turns) 3 and 4 were really fast up there. I definitely didn’t do it as good as the Xfinity cars do it, but I used it when I had to, and this car was just awesome. It’s really a lot of hard work. I think we went to the simulator four or five times this off-season and it just pays off, man. It’s awesome.”