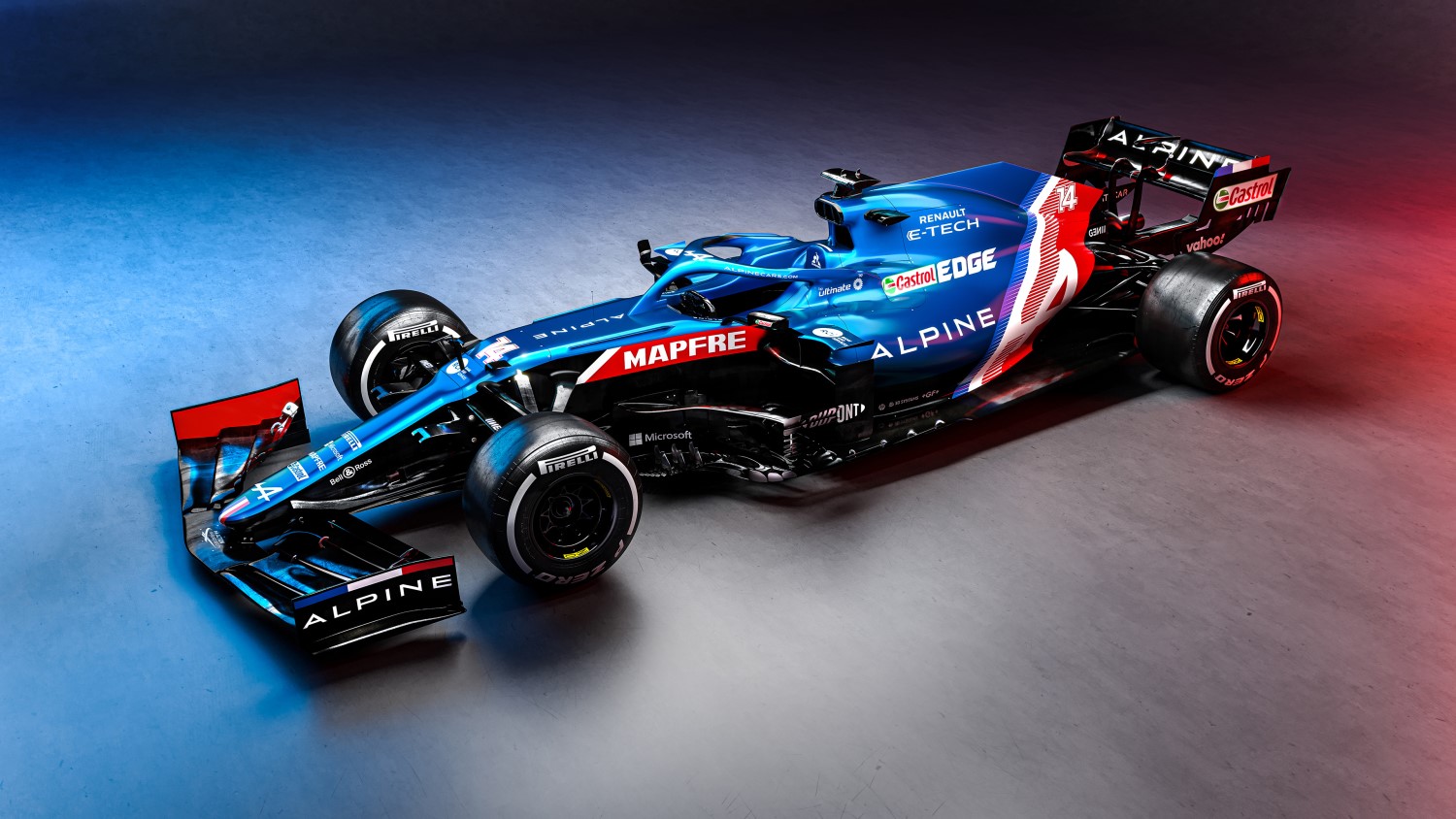 Alpine (formerly Renault F1)  has pulled the covers off its A521 and its new identity as the French outfit opens a new chapter in its Formula 1 history.

The striking blue, red and white livery of Alpine’s 2021 charger embodies the French manufacturer’s historical colors as well as those of its country of origin.

In September 2020, Luca De Meo, announced the creation of Alpine F1 Team, a renaissance of Groupe Renault’s F1 team, one of F1’s most historic and successful teams.

Already recognized for its records and successes in endurance and rallying, the Alpine name naturally finds its place in the high standards, prestige and performance of Formula 1. The Alpine brand, a symbol of sporting prowess, elegance and agility, will be designated to the chassis and pay tribute to the expertise that gave birth to the A110.

It is part of Groupe Renault’s strategy to clearly position each of its brands. For Alpine, this is a key step to accelerate the development and influence of the brand. Renault remains an integral part of the team, with the hybrid power unit retaining its Renault E-Tech moniker and unique expertise in hybrid powertrains.

Luca De Meo, CEO Groupe Renault: “It is a true joy to see the powerful, vibrant Alpine name on a Formula One car. New colors, new managing team, ambitious plans: it’s a new beginning, building on a 40-year history. We’ll combine Alpine’s values of authenticity, elegance and audacity with our in-house engineering & chassis expertise. That’s the beauty of racing as a works team in Formula 1. We will compete against the biggest names, for spectacular car races made and followed by cheering enthusiasts. I can’t wait for the season to start.”

The team first entered the Formula 1 World Championship in 1977 as Renault with Jean-Pierre Jabouille and the famed R.S.01, which featured the first ever turbocharged engine in Formula 1.

Although initially going without success, the team secured its first points in the 1978 United States Grand Prix with Jabouille’s fourth place. Regular success soon followed, and the team claimed its first Formula 1 victory in the 1979 French Grand Prix, again, with pioneer Jabouille, who was joined on the podium by René Arnoux after his legendary on-track battle with Gilles Villeneuve.

Over the next five years, more wins followed, with Alain Prost signing with the team from 1981 to 1983, a period in which the team won 11 races, including nine for Prost. The team continued in Formula 1 until 1985. For the latter part of the 1980s and 1990s, Renault focused its Formula 1 efforts solely on engine supply with extended success mainly with Williams.

The works Renault team did not return to Formula 1 until 2002 – housing its entry at Enstone for the first time. By 2003 it was fighting for Grand Prix wins and podiums and in 2005 and 2006 claimed back-to-back world championship titles with Fernando Alonso for the first time in its history. The team continued in Formula 1 until 2011 with a handful of wins, the last of which occurring in the 2008 Japanese Grand Prix with Alonso. Renault returned to Formula 1 in 2016 with the aim of climbing its way back to the front of the grid. In 2020, the team secured its first podium since the 2010 Belgian Grand Prix, courtesy of Daniel Ricciardo’s fine effort in the Eifel Grand Prix before he repeated that feat in Imola weeks later with Esteban Ocon claiming second in Sakhir at the penultimate Grand Prix of the season.

Now, the team takes on a new guise in Alpine, ready to write the next chapter in its Formula 1 history with two-time world champion Alonso partnering Frenchman Ocon at the wheel of the A521

Laurent was appointed Chief Executive Officer of Alpine in January 2021.

He will report to Luca De Meo, Chief Executive Officer of Groupe Renault. He is a graduate of ENSEEIHT and IFP School / ENSPM. He began his career in 2000 at Renault, in the mechanical engineering department.

In 2009, after obtaining an MBA from Harvard Business School, he was recruited by the Boston Consulting Group, where he worked in the New York office as an automotive expert. In 2012, he joined Google, where he was in charge of developing business relations with key accounts in the automotive industry. He then returned to Renault in 2018 and was appointed Director of Strategy & Business Development for Groupe Renault.

Alain is Special Advisor to the team, remaining in the role he has held since 2017.

Four-time Formula 1 world champion, Alain, is a legend in the sport, having won 51 races across 202 Grand Prix starts throughout the 1980s and 1990s.

Alain and Renault have a long working history. Alain raced for the Equipe Renault Elf F1 Team in the early part of his F1 career, from 1981 to 1983. Over this period, he won nine races, only missing the drivers’ title in 1983 by two points. He resumed his relationship with Renault in 1993 after joining Williams. The Frenchman went on to dominate the championship with seven wins, securing his fourth and final world title in the process.

Alain is also a Non-Executive Director on the Board of Directors for Alpine F1 Team.

He graduated from École Polytechnique, Paris, in 1999 and continued his studies between 1999 and 2001 at the Institut Supérieur de l’Aéronautique et de l’Espace (ISAE SUPAERO) and Imperial College London, specializing in Aeronautics and Aerodynamics.

Marcin began his career in Formula 1 in 2001 as an Aerodynamicist for Prost GP. Marcin then moved to Maranello, working for Ferrari between 2002 and 2007 in a period that saw the team winning multiple World Championships.

He then joined McLaren in 2007, working in a range of technical roles both at the factory and at the track, notably during the 2008 title winning year, before becoming Head of Aerodynamics in 2012.

His seven years at McLaren finished in 2014 when he joined the FIA to become Charlie Whiting’s right-hand man, initially as Formula 1’s Technical and Sporting Coordinator, subsequently becoming Head of the Formula One Technical Department in 2017.

Marcin is based at the team’s headquarters in Enstone, Oxfordshire. He oversees the running of Alpine F1 Team, leads the teams responsible for the development, production and operation of the car and ensures good alignment and collaboration between the Chassis and Power Unit entities. He represents the team at the F1 Commission and contributes to its overall strategy, working closely with Laurent to ensure the team meets its objectives.

Alpine is arguably the epitome of French motoring, building on remarkable victories throughout its history. It is a brand with heritage and pedigree. It is also a factory with highly skilled specialists manufacturing the A110 in Dieppe.

The activities of Alpine Cars, Renault Sport Cars and Renault Sport Racing are united as one entity under the Alpine brand. The newly created entity intends to be a “new generation” automotive Brand for discerning, passionate early adopters.

Alpine will also leverage the scale and capabilities of Groupe Renault and the RNM Alliance including technology with the Alliance EV-native platform, a global manufacturing footprint, a powerful purchasing arm ensuring optimum cost competitiveness, a global distribution network and RCI Bank and Services. The clear objective is to be profitable in 2025 including investment in motorsport.

Alpine is present in 16 countries globally with a network of 74 dedicated dealerships.

Laurent Rossi, CEO Alpine: “The new Alpine entity takes three brands with separate assets and areas of excellence to turn them into an empowered, fully-fledged business. The craftsmanship from our plant in Dieppe, the engineering mastery from our Formula One and Renault Sport teams will shine through our tech-infused, 100% electric line-up, taking the beautiful Alpine name to the future. We’ll be on the tracks and on the roads, authentic and high-tech, disruptive and passionate.”

“Formula 1 will be at the center of the business unit. Alpine’s reputation has stemmed from racing and placing the pinnacle of motorsport at the heart of the company is certainly exciting. Formula 1 provides a fascinating marketing platform with half a billion fans worldwide. That brings the unique opportunity for the best possible global branding to create value around Alpine. In addition, Formula 1 is built on ingenuity and cutting-edge features, with every detail absolutely paramount to success. This Formula 1 know-how will play a seminal role in transitioning expertise from the track into our road cars.

“More immediately, as a team, we enter an exciting chapter in the sport with the 2022 regulation changes on the horizon. This marks a new era for Formula 1 and an opportunity to climb the summit. This year is a transitional year

Motorsport is in Alpine’s DNA. From the creation of the brand in 1955 to the present day, models with the arrowed A have always been entered in automobile competitions. Whether by the brand itself or through private commitments, Alpine has shone on rally stages or on circuits all over the world.

As soon as Alpine’s relaunch in 2012 was announced, a competition program was decided to develop the brand’s awareness. This commitment was underlined in endurance racing, through a partnership with the Signature team, which has enjoyed numerous successes on international circuits.

The year 2021 will mark an important milestone in the history of the brand, with a commitment for the first time in its history to Formula 1, a return to the premier class of the World Endurance Championship, and the involvement in the FIA R-GT World Cup with Alpine Rally from customers competition program.

The Alpine name will be present in junior single seaters with the merger of the Formula Regional European Championship, certified by the FIA, with the Formula Renault Eurocup to create an all new competition, the Formula Regional European Championship by Alpine – certified by the FIA. The grid of a maximum of 36 cars in maximum three-car teams, and the possibility of an additional fourth in case of a female driver, will be powered by a 1.8-liter Renault engine, feature chassis by Tatuus and Pirelli tires. New cars will be built in the racing department at the Alpine factory of Dieppe.