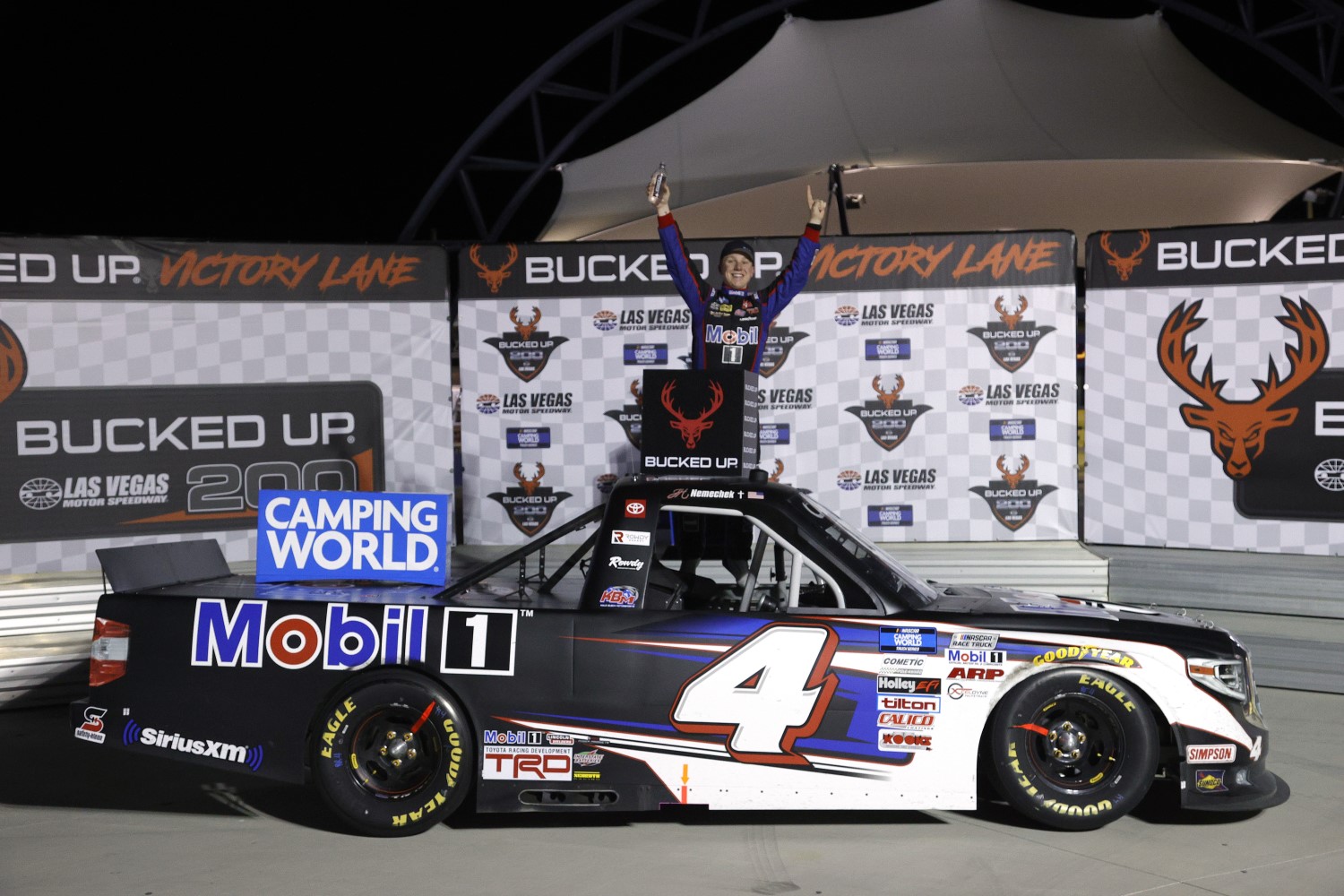 John Hunter Nemechek held off his team owner, Kyle Busch, by 0.686s to win the Bucked Up 200 NASCAR Truck race in Las Vegas.

Nemechek, who led a race-high 94 laps in the No. 4 Kyle Busch Motorsports Toyota, fended off his team owner in the No. 51 Toyota following a restart with six laps remaining. Nemechek also earned the Stage 1 win, while Busch won Stage 2. It served as the seventh victory of Nemechek’s career in the Camping World Truck Series.

And while Nemechek held the point for most of the race, it was a typically thrilling Las Vegas show turned in by the Vegas native Busch, who has won the last three spring races at the track.

Busch started 29th and raced his way inside the top 10 by the 10th lap. A blown tire on his No. 51 Kyle Busch Motorsports Toyota put him down a lap with about 50 laps remaining and again, he turned in a dazzling performance – restarting 25th with 31 laps to go and breaking into the top 10 just 10 laps later.

The two Kyle Busch Motorsports drivers were lined up first and second on the race’s final restart with six laps to go, but Nemechek was able to pull ahead and pull away to his first series victory driving for the series all-time winningest driver Busch.

“Coming back to the Truck Series, that was the plan, that was the goal, we came into the year with the hashtag ‘here for wins’ and we are here for wins,” said Nemechek who has seven career series wins. “I definitely think experience paid off tonight.”

Disappointed not to win, Busch was still encouraged for his team after the race.

“It’s perfect, it’s all you can ask for, it’s everything,” the two-time NASCAR Cup Series champion Busch said of his team after the race. “It’s cool to see the four-truck in Victory Lane and see John Hunter have a shot and get back in Victory Lane.

“Having Eric Phillips back and all the guys that have come on board this year doing all the stuff that we’re accustomed to doing and getting back to running up front, seeing both of us sharing in that and having that speed, that four-truck was fast.

“Even on those short runs I couldn’t run with him. After about eight or 10 (laps) I had a better shot at running with him but we just didn’t have the laps there at the end.”

Enfinger and Kligerman both collected an extra $25,000 bonus check from series sponsor Camping World for their top-10 efforts. The series sponsor offered an incentive program this week with an extra payday available for the 10 trucks that carried the Camping World name on it, as Enfinger and Kligerman’s did. There was a bonus for winning, finishing among the top-five and finishing among the top-10.

With the win, Nemechek takes a 14-point advantage atop the championship standings over the season’s two-time winner Rhodes. The series next race is the Fr8Auctions 200 on March 20 at Atlanta Motor Speedway.

“36th to 16th and then… ouch,” said Daly. “I guess that’s what it feels like when all the air leaves the right rear. Never felt anything like that before. Truck was superfast. Was having a lot of fun out there thanks.”

The biggest incident of the race occurred on Lap 96. A seven-car pileup at the entrance of Turn 1 after the No. 24 Chevrolet of Raphael Lessard came across the nose of David Gilliland’s No. 17 Toyota, sending both drivers for a spin. The crash also collected Hailie Deegan, Sheldon Creed, Austin Wayne Self, Bret Holmes and Ryan Truex. Holmes and Truex were forced to retire from the race.

You won the race and beat the boss. How was that finish for you?

“I just can’t thank everyone at Toyota, Jack Irving (TRD), Kyle Busch, Uncle Eric (Phillips, crew chief) for this opportunity. It means a lot to me. Mobil 1 on board, coming back to the Truck Series, that was the plan, that was the goal. We came into this year with the hashtag here for wins, and we are here for wins. I definitely think experience paid off tonight. We did an amazing job. I can’t thank Fire Alarm Services, ROMCO, all of our partners for all of their help. Thank you, fans for being here. It’s awesome to have you guys back. I can’t wait to go celebrate.”

Once you were clear, what were you thinking?

“He was faster than me in stage two, so I really didn’t know. It was all about using our truck to the best we could possibly do, wrapping the bottom and taking the dirty air away. He had to run up, and it created more lap time for him. Overall, it was an awesome victory. I wish my wife Taylor was here. Thank you for all of the support, my family, everyone involved. She had to stay home because we are about to be on baby watch. It’s awesome.”

What does it mean to get your first Truck Series win driving for Kyle Busch Motorsports?

“It’s an awesome day. The goal here for us was to come here and win. We’ve been close the last two weeks, and we have fast race trucks. I can’t thank everyone enough – Jack Irving (TRD) from Toyota, Mobil 1, Fire Alarm Services, Kyle (Busch, team owner) for giving me this opportunity. The opportunity to come here and race in the Truck Series for Kyle Busch Motorsports is an amazing opportunity, and we’re capitalizing on that. We want to be the dominant one this year, and we want to win as many races as we can. It’s awesome to get it kicked off here in Vegas and beat the boss.”

How crazy were the restarts during the race?

“They definitely were. Overall, it was an amazing day. Our restarts were on point all day. Just a lot of fun and that’s all we can ask for. We’re here to have fun, we’re here for wins and we’re doing it.”

What was missing at the end of the race to contend with John Hunter Nemechek?

“We just didn’t have enough in our Cessna Tundra. They were a little bit better than us so not sure what differences they had. I was just really tight and really rough over the bumps, trying to get through the bumps. Looking at the splitter wear, it was really rough on the splitter and wearing through it. We were battling some little things, but overall our truck was still fast. It was cool to come home one-two.”

Having your team truck win, does that help take away the sting of not winning yourself?

“Certainly, it does. Anytime you finish second to a team truck, you know how good the equipment is and it’s nice to see the equipment getting full potential and running up front. I’m exciting to have John Hunter (Nemechek) this year. When we had the opportunity to talk last year and to bring him in and to have Eric Phillips (crew chief) back on board, that was going to be a winning combination I felt like and here we are already reaping the benefits. I hate I finished second obviously, I want to win, but as a team owner, I get paid the same whether they win or I win and it’s nothing so I’m all good.”

What was missing to contend with the Kyle Busch Motorsports Tundras tonight?

“You can see right there, our left front (tire) is corded really bad. We had a good night. We finally got on the right track. Those first two races didn’t go the way we wanted them to so this is a good way to bounce back, but it always stings a little bit when you come to a place that you’ve had success at and you don’t get the job done. Scott (Zipadelli, crew chief) and everybody back at the shop, they did a really good job bringing a really fast Toyota Tundra. All in all, we just came up short tonight. We just got too tight when the tires started cording and started chattering the left front. Can’t thank everybody at Ibraraki Toyopet enough for coming on board. Everything that all these guys do in Japan for us is a really big deal with everything going on. It’s really cool to see that. We’ll bounce back and go to Atlanta, a place that we’ve had some good runs at as well and see if we can get the job done there as well.”

What was missing at the end of the race for your team?

“We just lacked a little grip on the restarts. It was good and great night for the Halmar International group. Halmar has been awesome behind us and one of the best sponsors in the business. Thanks to Chris Larson and everybody at Halmar International, everybody at TRD (Toyota Racing Development) for the help. We were close with our Tundra. We’re back in the top-five racing. From where this team was a year ago to where we are is really awesome. Got some momentum, good points day and just lacked a little grip on the restarts.”

Can you take us through your race tonight?

“Just the restarts killed me to be totally honest. I could get to the 16 (Austin Hill) there at the end. I could get to his bumper and I could push him for a second and then he would get out on me. We just didn’t have the two lap run speed that we needed. We needed some long green flag runs and I think we would have been a lot better off. This Menards Toyota Tundra, not too terrible. Just keep working on it. Atlanta, we’re going over there in a couple weeks and that’s my favorite race track that we go to on the circuit so really, really looking forward to that one.”