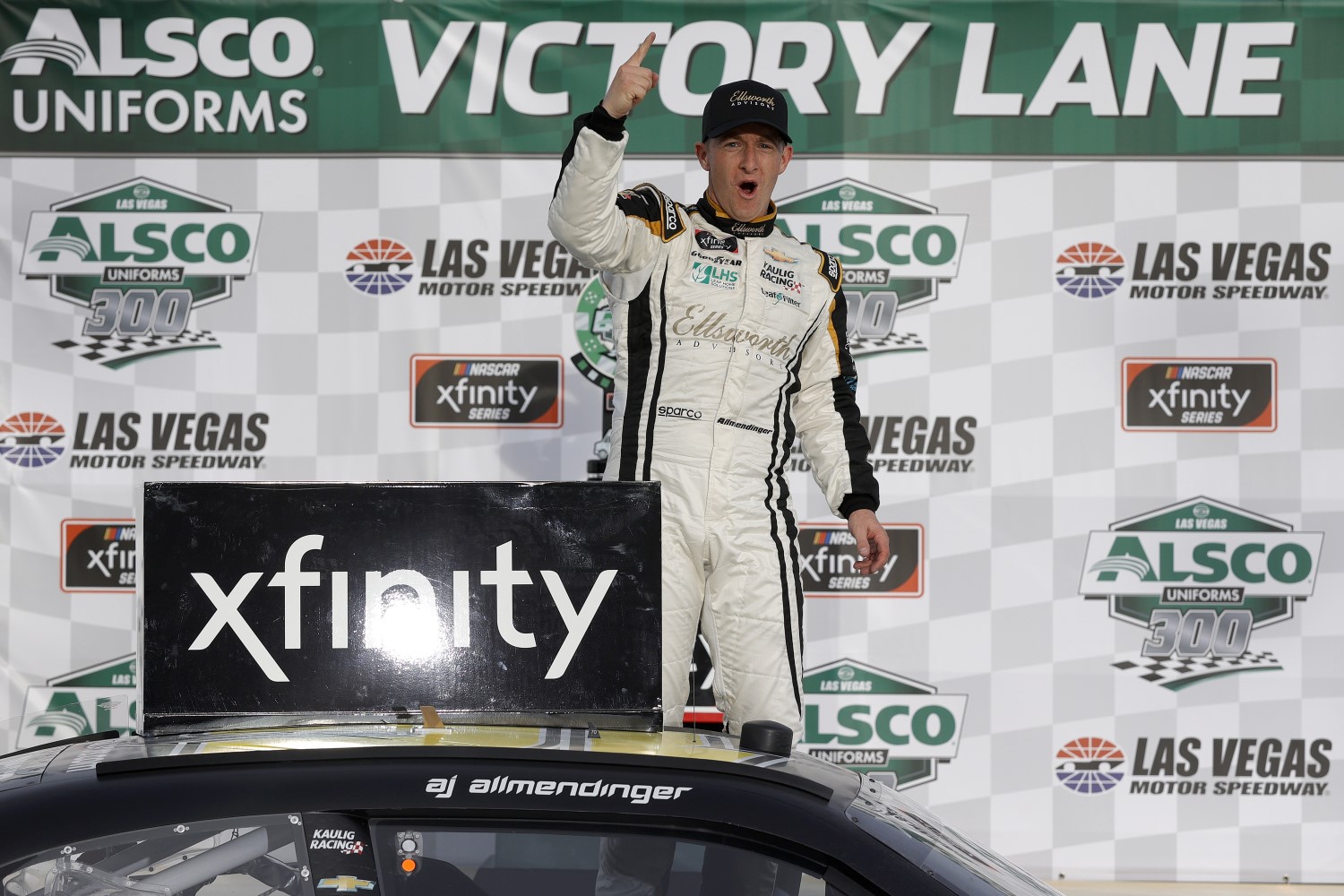 AJ Allmendinger took the lead and held off the field on a final race restart with 12 laps remaining to earn his fourth NASCAR Xfinity Series win in the last 16 races – taking the victory in the Alsco Uniforms 300 at Las Vegas Motor Speedway in his first race at the track in three years.

Allmendinger’s No. 16 Kaulig Racing Chevrolet had to hold off the No. 18 Joe Gibbs Racing Toyota driven by Daniel Hemric, who led a race-best 74 of the 200 laps and came 0.978 seconds away from his first career victory.

It was an emotional win for the veteran Allmendinger, who climbed out of his car at the finish line and leaned against it, eyes closed for a moment before doing his live television interview.

This is the 39-year-old Californian’s first full-time season racing in NASCAR since 2018, when he competed in the NASCAR Cup Series ranks. He earned three wins driving part-time for Kaulig Racing the last two seasons.

“First of all, it’s awesome to have you all back in the grandstands,” a smiling Allmendinger said, motioning toward the cheering but socially distanced and limited-size crowd.

“It’s emotional because you don’t know when you’re going to do this again,” Allmendinger continued. “You never know. This could be the last one (win), you never know, I hope it’s not. I think we can do a lot more.”

“Even though I’m back full-time,” he added, “this is fun, but I want to win so bad for [team owner] Matt [Kaulig] every week. It’s hard to put into words what he means to me. Truly how bad I want to win for him … it means that much to me that he believes in me.”

For Hemric, who now has 11 career runner-up showings in NASCAR’s three national series, it was a tough final outcome considering the strong showing up front for his Joe Gibbs Racing Toyota all race long. He led eight different times and won Stage 2. Tonight was Hemric’s eighth runner-up finish in his NASCAR Xfinity Series career. NASCAR Hall of Famer Dale Jarrett holds the Xfinity Series record for the most runner-up finishes before his first victory with 10 second-place finishes.

“You hate to have one get away like that, but we came here and wanted to try to have more speed to lead laps and win stages and we did that today,” Hemric said. “We lined up with a shot there and just got beat. Congratulations to AJ. We just got beat.”

Cindric had a tire go down on his No. 22 Team Penske Ford just 55 laps into the race. A crash involving Ty Dillon and Riley Herbst one lap later prompted the race’s third yellow flag, allowing Cindric to regain his lost lap as the caution period’s beneficiary, though the misfortune dropped him to 36th in the 40-car field before his midrace comeback.

“We cut a tire down when we were one of the best cars and took us the entire race to get back to fourth. We needed a hundred more miles and maybe we would have had a shot with our Carquest Ford Mustang. All good on my end, just bad luck.”

With his inspired rally, he finished 10th in the second stage and broke into the top five by Lap 117. He made contact with Harrison Burton in the closing laps and his fourth-place showing is his fourth top five in as many races.

Cindric holds a 21-point lead over Hemric in the series driver standings entering next Saturday’s Call 811 Before You Dig 200 at Phoenix Raceway.