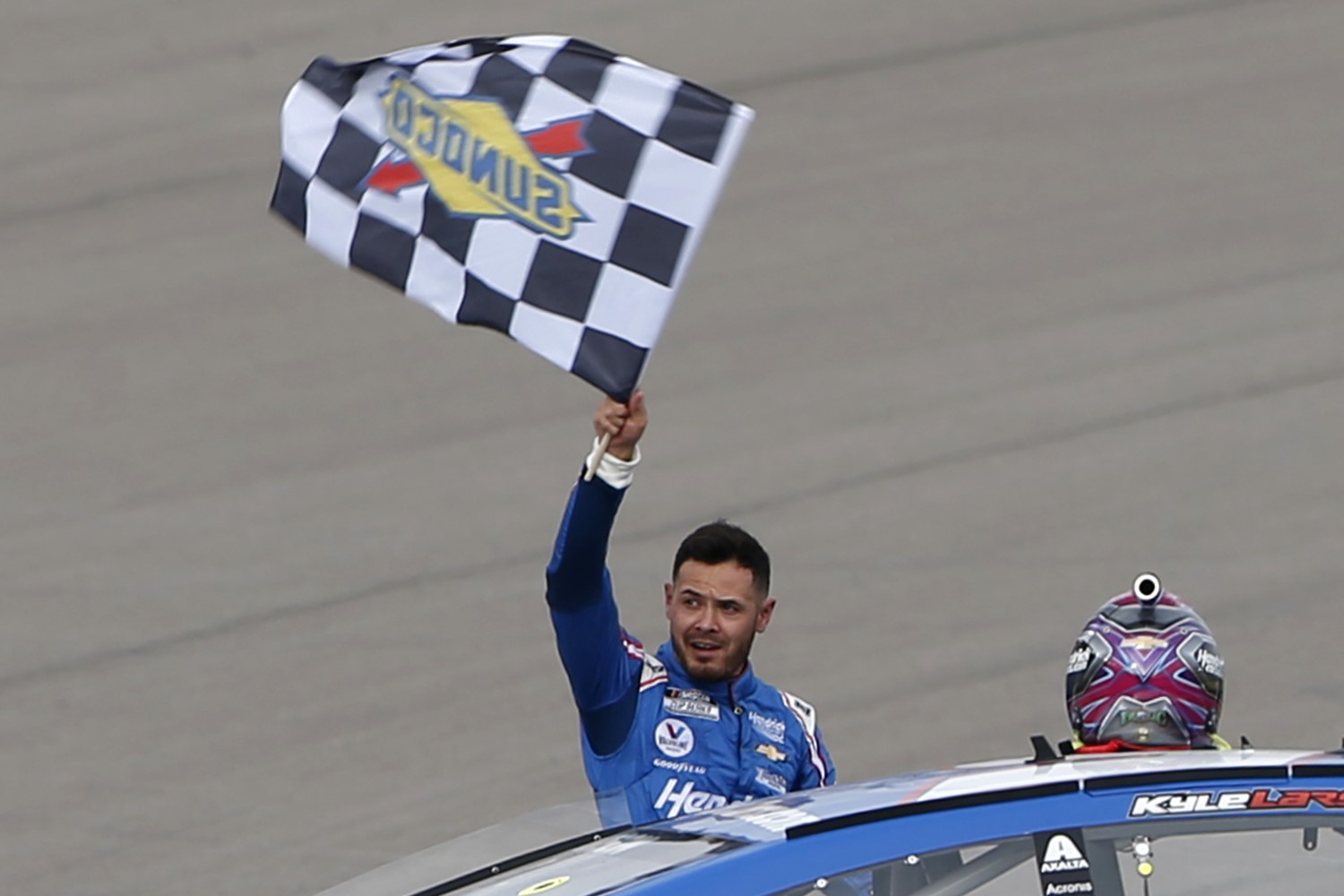 It was only his 4th start driving for Hendrick Motorsports, Larson made Rick Hendrick know he hired the right driver for the #5 Chevy .

Larson became the fourth different winner in four Cup Series races this season, leading a race-high 103 of the 267 laps in the Pennzoil 400.

Brad Keselowski finished second  3.156s back in the #2 Penske Ford.

Kyle Busch came home 3rd in the #18 Joe Gibbs Toyota while #11 Denny Hamlin and #12 Ryan Blaney rounded out the top-5.

Keselowski and Larson divided the stage wins, with Larson securing his first stage victory since September 2019 at the second break.

Larson was exuberant speaking to the team on the radio while driving under the checkered flag as the race winner. He did celebratory burnouts on the backstretch and then again under the flag-stand on the frontstretch telling his Hendrick Motorsports team on the car radio, “What a car, what an opportunity. Thank you, guys.”

Just as Larson was finishing his live television interview, Keselowski ran across the infield grass to shake Larson’s hand and congratulate him on a powerful race performance.

“I’m just really happy for him, I know he’s been through a lot in the last year and he’s a good kid who I’ve known for a little while and has a good family and I’m just happy to see him bounce back,” the Team Penske driver Brad Keselowski said.

“He was really fast – had a lot of speed in all the lanes which was really impressive, usually you have to make a compromise, but they were really good. If Kyle Larson wasn’t here, we would have had a dominant day,” Keselowski added with a smile.

It was a highly competitive race from green to checkered flag with 27 lead changes among 12 different drivers. Five drivers led at least 20 laps. Keselowski won Stage 1 and Larson won Stage 2 – the first stage victories for both drivers this season.

In all, Larson led a race best six times, working his Chevrolet back to the front no matter the challenge, ultimately pacing the field for the last 30 laps en route to his seventh career win. It is his first on a 1.5-mile track after nine previous runner-up finishes on mile-and-a-half venues.

“It was such an awesome car,” Larson said. “Cliff (Daniels, crew chief) and everybody did a great job preparing this piece. It was so much fun to drive. I could go wherever I wanted to. I know we had a really good car once we would kind of get single-filed out; but just drafting early in the run was tough.

Kevin Harvick started from the Busch Pole, but lost the lead in Lap 1 and dropped further back after a fender rub and a flat tire near the Stage 1 midpoint. He battled the handling of his No. 4 Stewart-Haas Racing Ford and finished 20th, one lap down.

WE KNEW YOU WERE GOING TO BE QUICK WHEN YOU CAME TO HENDRICK MOTORSPORTS, BUT TODAY YOU WERE DOMINATE IN THIS RACE

“Yeah, thanks. It was such an awesome race car. Cliff (Daniels, crew chief) and everybody did a great job preparing this piece. It was so much fun to drive. I could go wherever I wanted to. I knew we had a really good car once we would kind of get single-filed out; but just drafting early in the run was tough. But thank you so much Mr. Hendrick, Jeff Gordon, and everybody at Hendrick Motorsports for the amazing opportunity I’ve been gifted. Hendrick Motorsports, Chevrolet, everybody at the engine shop, thank you so much for all the hard work This is definitely special.”

YOU MENTIONED MR. HENDRICK AND EVERYTHING THAT HE HAS DONE FOR YOU IN YOUR CAREER. AND NOW YOU’RE RUNNING THE NO. 5 THAT RICKY HENDRICK MADE SO FAMOUS WHEN HE WAS DRIVING. WHAT DOES THAT MEAN TO YOU?

“It means a lot. This is Rick’s most special paint scheme, for obvious reasons. And it’s just an honor for me to be able to drive it in our first time out with this color scheme. Like I said, it’s blessed. Thanks to all the fans for coming out and to everybody at home watching on TV. That was some fun racing on the re-starts, so I hope everybody enjoyed it. I know I did. I had fun racing Brad (Keselowski) and Denny (Hamlin) and everybody and tried to give it away there coming to a green flag stop; but thankfully we were able to have a good enough car to hold them all off.”