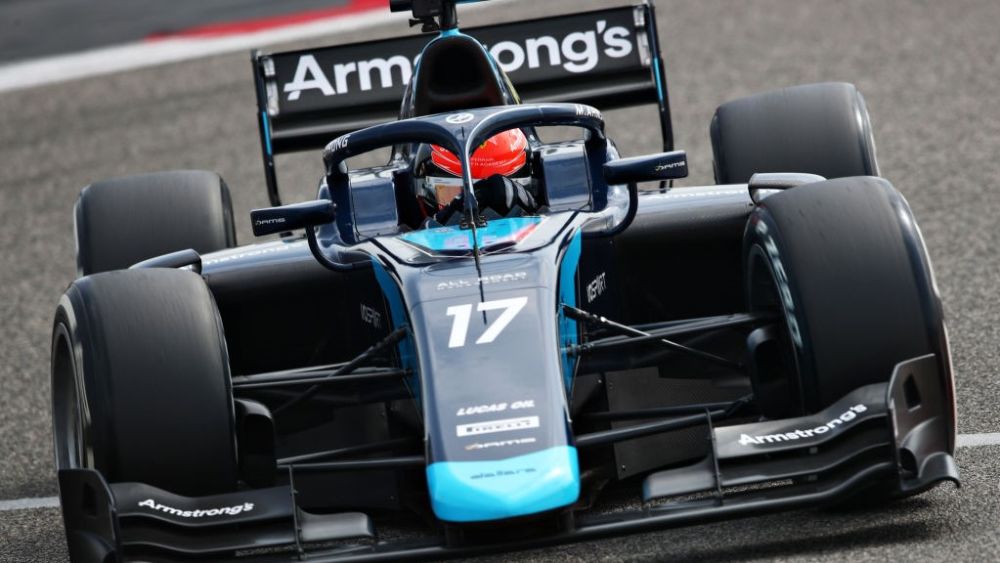 DAMS’ Marcus Armstrong (shown above) continued his strong run in pre-season testing, following up his third-place finish on Day 2 with top spot on the final day of testing in Sakhir. The Ferrari junior’s tour of 1:42.173 was enough to beat out Hitech and Red Bull Academy pairing Liam Lawson and Jüri Vips.

Despite Armstrong’s strong showing on Day 3, ART Grand Prix’s Christian Lundgaard finished pre-season testing as the quickest man overall with a tour of 1:41.697 on Tuesday morning.

The field weren’t wasting any time on the final morning of testing. Chucking on their last set of fresh Pirelli boots, almost everyone headed out onto the track at the first opportunity. Hitech Grand Prix’s Vips set the strongest of the first set of fast laps, lapping the Sakhir circuit in 1:42.224.

The Estonian didn’t spend long at the top of the leaderboard, as he was swiftly bettered by his Hitech and Red Bull Academy teammate Lawson, the Kiwi going faster by the finest of margins: just 0.006s.

The pair ended the session in second and third as their former Formula 3 rival Armstrong continued his solid start to life with DAMS, lapping faster than them both with a time of 1:42.173.

UNI-Virtuosi’s Guanyu Zhou just missed out on a spot in the top three, falling one hundredth short of Vips’ best lap time, while MP Motorsport’s Lirim Zendeli was less than a tenth back himself in P5. Robert Shwarztman missed out on the top five by an even finer margin, lapping a mere 0.003s off Zendeli’s best time.

It was just as tight further down the field, with the top 17 separated by just one second at the end of the morning session. The gap between first and 10th was less than half a second, Virtuosi’s Felipe Drugovich finishing the afternoon with a best lap of 1:42.570.

Ralph Boschung, Richard Verschoor and Oscar Piastri were the other drivers to feature inside of the top 10, finishing seventh, eighth and ninth in the morning.

Having used up their final set of fresh tires in the morning session, the afternoon was always going to be about longer-runs and gathering that final bit of data ahead of the new season. Just four drivers headed out onto the circuit when the lights went green, with Zendeli taking first place of the quartet.

The MP Motorsport racer held onto first as the remainder of the field fed out onto the track, with the majority of times around the 1m 48s mark, and Zendeli running at 1:47.305, which would end up being good enough for P4.

Testing with Campos, Boschung still had some energy to get rid of before departing Sakhir and darted round with a time of 1:44.905 to go first.

Little changed until the final hour, when PREMA’s Robert Shwarztman headed out for a series of long-runs and managed to leap up to second with a tour of 1:47.146. The Russian was bumped down to second by Gianluca Petecof in the final 15 minutes, as the Brazilian joined his Campos teammate in the top two with a lap of 1:45.537.

During his own stint of long-runs with PREMA, Piastri managed to make the top five himself, setting 1:47.306, just 0.001s off Zendeli.

Lawson and Pourchaire both sat second for short periods at the start of the afternoon before dropping down to seventh and eighth. Verschoor and Guilherme Samaia completed the top 10.

Armstrong and Lundgaard will looking to carry their solid pre-season into Round 1 of the campaign when action gets underway here in Sakhir in just over two weeks’ time.