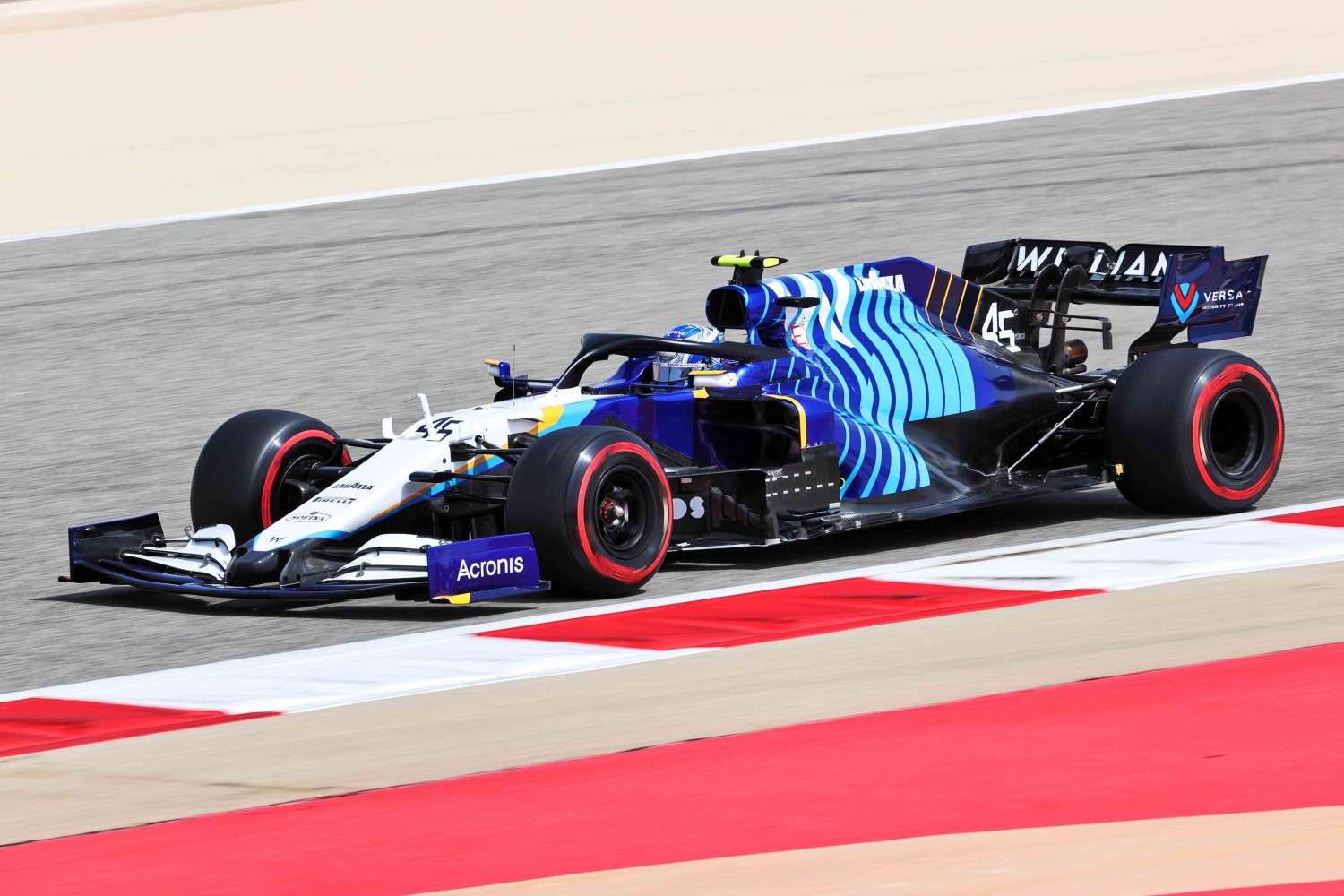 Ahead of the 2021 FIA Formula One World Championship, the Williams Mercedes FW43B took to the track this morning for pre-season testing at Bahrain’s International Circuit. The team’s Development Driver, Roy Nissany was behind the wheel, with Williams race drivers set to take responsibility for the remainder of the weekend. Nicholas Latifi will drive on Saturday, and George Russell will conclude the test on Sunday 14th March.

Whilst evolutionary on the technical side, the Williams-Mercedes FW43B has a dramatic new visual identity and livery that captures that indefatigable racing spirit of the team’s glorious past, its present transformation and its drive to future ambitions. To accompany the striking livery, Williams has proudly welcomed several new partners and suppliers to the team; OMP Racing, B&R Automation, ZEISS, Nexa3D and Bremont Watches. Team partners, Acronis, The Financial Times, DTEX and the SIA have renewed their agreements and Sofina, Lavazza, Versa, PONOS, Symantec, IQONIQ, Pirelli, Umbro, PPG, Thales, Crew Clothing, U-Earth and Precision Hydration continue in the portfolio. Williams Racing looks forward to strengthening these relationships as the team enters a new era with support from Dorilton Capital.

OMP Racing will supply technical performance products to Williams’ drivers as well as the team’s pit crew. Global leader and pioneer of factory automation solutions, B&R will embed their class-leading PLC hardware and I/O modules in the wind tunnel. ZEISS will provide a range of equipment benefiting departments throughout the business including Wind Tunnel, Quality & Inspection and Prototype & Test. Partnering with Nexa3D, the team is improving its capability to make complex lightweight parts, while minimizing material usage and waste. Finally, Bremont Watches have become the team’s Official Timing and Watch Partner and both George Russell and Nicholas Latifi will proudly wear their Bremont watches, along with other senior members of the team.

Simon Roberts, Team Principal of Williams Racing, said: “It is great to be back out in Bahrain for our pre-season test ahead of the 2021 FIA Formula One World Championship. The team at Grove has worked tirelessly over the winter break to improve our competitiveness and we were all looking forward to seeing our FW43B leave the garage this morning in its fresh livery.

“Due to the regulations, the FW43B has inherent architectural similarities to FW43 and continues to build on the aerodynamic development of the 2020 car, adapted to new regulations for 2021. The team has made a conscientious decision on aerodynamics to reorganize and invest where the efforts will be most rewarded”

“With a unique set of regulations for 2021, we have optimized what is permissible, reconfigured the cooling systems for greater performance and reduced the mass of the car where possible under the constraints of the homologation regulations. Whilst there is still a lot of work to do, we are happy to see momentum in the right direction which has been a welcome boost for all involved.”

Dave Robson, Head of Vehicle Performance, added: “It’s great to be back in Bahrain to run the 2021 cars and tires for the first time. Whilst there is a lot of carryover from 2020, there has been enough freedom in the aerodynamic regulations for the cars to have evolved significantly. There are also rule changes to the floor to reduce the load on the tires, and the tires themselves are of a revised construction.

“Testing in Bahrain is a different prospect to Barcelona, and whilst it is very likely that we will enjoy dry weather, we can expect hot and windy conditions to dominate. This will help us prepare for the opening race in Bahrain in a few weeks’ time but can make testing new components a little trickier. We have just three days of track running to prepare for the start of the new race season, and whilst this places big demands on the Team, we are looking forward to embracing the challenge and working methodically through our program.

“We will start the test with Roy Nissany driving on Day 1. Roy’s outings last season and his recent F2 experience here in Bahrain put him in a great position to get our test off to a strong start. He will then handover to Nicholas for Day 2, and finally George for Day 3. We have some new components to try, some routine learning to work through and an exciting and unprecedented Formula One season to prepare for.”

George Russell added: “The winter has been great, and I was able to enjoy some time off which was needed after such an intense year. We have since resumed training and been back in the simulator conducting all of the necessary work ahead of the season. The change of ownership and management is really exciting for Williams and there is a lot of positivity at the factory. The decisions that have been made so far have been encouraging and the mid-to-long term future is in very good hands and will be on an upwards trajectory.

“I am really looking forward to getting going again and I am intrigued to see how we perform as a team. Although there is a lot of carryover from last year’s car, I think the aero change will mix things up quite a bit, fingers crossed in our favor. I believe we have made some good steps in the right areas to bring us closer to the midfield, but until we turn a wheel on track we will not know.

“The year ahead is exciting, we have welcomed several new partners to the team, and the fresh livery looks fantastic. It is very futuristic, modern and shows the direction that Williams is going in as a team. Overall, there is a lot to look forward to this year, and I am feeling well prepared for a 23-race calendar.”

Returning for his second season in Formula One, Nicholas Latifi said: “I am super excited to jump into the car for pre-season testing. The winter break was quite long with a lot going on behind-the-scenes with regards to my personal training with my coaches, but also back at the factory with the simulator work and meetings. All the guys and girls are working so hard to make sure that the car has all the right parts and are assembled correctly. Pre-season testing is the first opportunity to push the car and see what it is capable of and I am very excited to see where we stack up.

“I am very optimistic that we are going to continue to keep making steps forward and be consistently more in the fight. This season is unique as the car is a carry over from last year, so we must be realistic with our expectations, but I am feeling positive that we will start off with a good base even with some new regulation changes. Aside from the similarities of the FW43 and FW43B, the livery and introduction of some new partners is hugely exciting for this season ahead. Working with new partners is always great in Formula One, as they are a critical part of the business. The ability to attract new partners brings great optimism for the team and motivation for everyone going forward.

“This year marks our first year under the new ownership of Dorilton, it will be good to have some consistency and stability in the team going forward. It is a great opportunity for the team, a fresh start with new investment and support. Everyone is very motivated to push the team forward especially as we head into a new era of Formula One from next year.”

Pre-season testing concludes on Sunday 14 March, with the first race of the season taking place in Bahrain on Sunday 28 March.