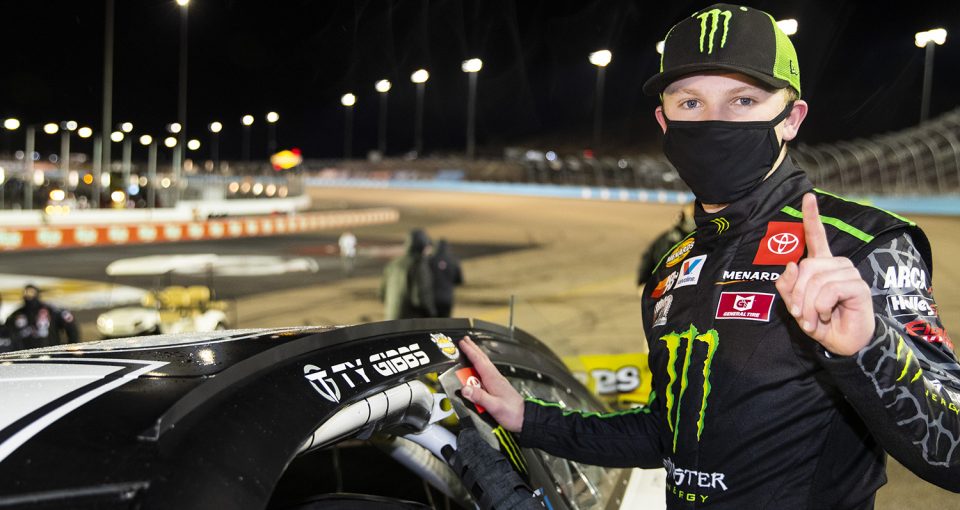 Only two challengers had chances to stop Ty Gibbs from winning Friday’s General Tire 150 at Phoenix Raceway in the closing laps.

One was Corey Heim. The other was rain, as sprinkles began to fall on the one-mile paved tri-oval in Avondale, Arizona, as the field prepared for the final restart.

Driving the No. 18 Pristine Auction Toyota for his grandfather’s Joe Gibbs Racking team, Ty Gibbs beat both his rival driver and the weather in a one-lap dash to the finish for his first win of 2021 on the ARCA Menards Series platform. The 18-year-old from Charlotte, North Carolina, now has nine wins on his ARCA Menards Series resume.

“Not a lot of kids get to do what I do,” said Gibbs, the grandson of Pro Football and NASCAR Hall of Famer Joe Gibbs, in Victory Lane. “I’m very thankful for that, and I really love driving race cars.”

A caution with seven laps to go set up a last-lap race to the line between Gibbs and Heim, the latter of whom won the ARCA Menards Series season-opener at Daytona International Speedway on Feb. 13. Heim challenged Gibbs on the restart, but the No. 18 pulled away to the point where the No. 20 had no way to challenge for the win in the final corner.

“In those moments, God blessed me a lot with my driving ability,” said Gibbs of the final restart. “I’ve got clean tires. Somehow I drove through it; it was raining pretty hard there for a little bit, and it kind of cleared off, and we went back to green.”

Jesse Love, the defending ARCA Menards Series West champion, was the highest finishing driver (sixth) Friday among those who have announced intentions to run the complete West Series season and compete for the series title.

Drew Dollar (seventh), Todd Souza (eighth), Taylor Gray (ninth) and Trevor Huddleston (10th) made up the rest of the top 10.

Multiple contenders were taken out of the race Friday before the field completed the first lap. Gracie Trotter made contact with Zane Smith entering Turn 3; the two then spun and collected Jack Wood and Toni Breidinger.

With 30 laps to go, another strong contender in Nick Sanchez was knocked out of the race by a crash.

He tangled with a lapped car and hit the wall while running third.

Gibbs, who started Friday’s race on the General Tire Pole after qualifying was rained out (the field was set by practice times, per the ARCA rulebook), led 124 of the 150 laps. Gray was the only other driver who led double-digit laps at Phoenix with 15.

Gray fell out of contention during the competition caution halfway through the race when his pit crew committed a penalty for changing tires and fueling at the same time during a modified live pit stop. He was held two laps, one of which he got back before finishing ninth as the first car a lap down.

Friday’s race at Phoenix featured seven cautions for a total of 64 laps.

The ARCA Menards Series gets a lengthy break before its next race, the April 24 running of the General Tire 200 at Talladega Superspeedway. That event is scheduled to broadcast live on FS1 starting at 1 p.m. ET.

Rookie drivers are denoted with an asterisk.