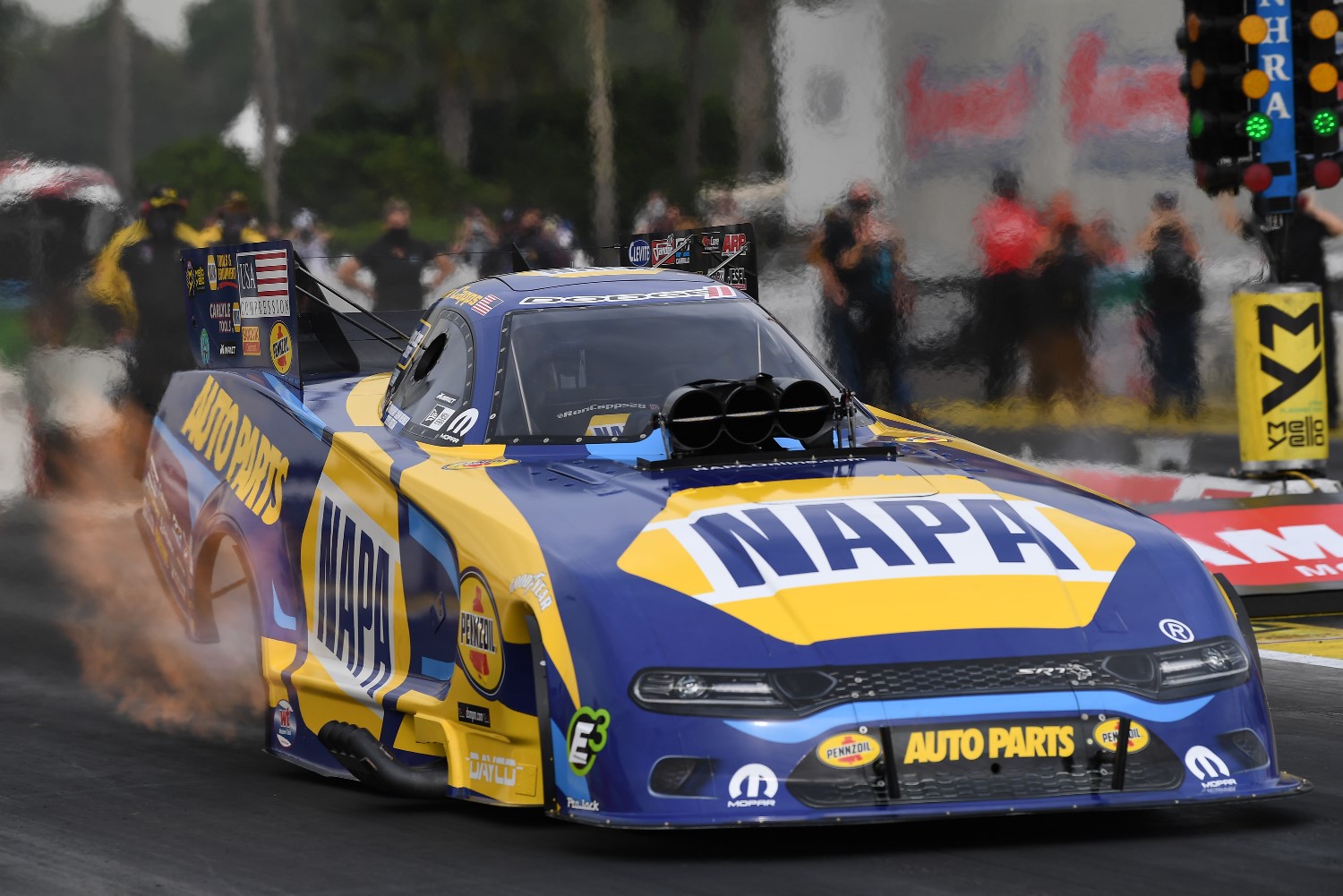 Torrence blasted to a 3.699 during Friday’s single qualifying run and that performance held up through both of Saturday’s runs, largely due to the warm and sunny conditions present at Gainesville Raceway. Torrence’s Capco dragster rarely fails to make a full run but he smoked the tires on Saturday’s first run. Crew chief Richard Hogan made the necessary adjustments and Torrence, who received his third championship ring in a special ceremony during qualifying, returned with a 3.724, to earn three more qualifying bonus points and prepare for his opening round match against No. 16 qualifier Joe Morrison.

“We need to maintain our focus and just concentrate on making laps and going rounds,” said Torrence. “We’re going to need to step up because it’s going to be competitive. It always is out here. “I can also tell you that after being off a few months longer than usual, these cars are a lot faster than I remember. Last night’s run was stout and then we missed it this morning but we ran good here [in Q3]. We need to just keep it going.”

Torrence’s closest pursuer is his father, Billy, who laid down a solid 3.735 in the final session, and Leah Pruett, who is third quickest with a 3.741. Pruett is also solidly in the field for the Factory Stock Showdown with her Dodge Challenger DragPak. Brittany Force, who marked her return to the sport after a year-long absence with a sixth-best 3.746, just a thousandth behind Doug Kalitta’s 3.745. The Gainesville Top Fuel field features a number of fresh faces including Josh Hart, Mike Bucher, Artie Allen, and Morrison. Hart, a two-time U.S. Nationals winner in Top Alcohol Dragster, was particularly impressive in his nitro debut with a 3.768 to make the top half of the show.

Defending Gatornationals winner Ron Capps came into Saturday as the provisional leader in Funny Car and he left as the top qualifier for the 26th time in his career. Capps’ 3.895 from Friday held as the best run of qualifying and the NAPA team, now led by Dean Antonelli and John Medlen, also ran a 3.948 in Q2 before shaking the tires under the lights on Saturday night. In addition to his Gainesville victory in September, Capps also finished the 2020 season by making the final round in Houston and Las Vegas en route to a No 4 finish.

“What a start. This is our yellow [Camping World low qualifier] hat. It belongs to Guido [Antonelli] and Medlen and all of our NAPA guys,” said Capps. “I was bummed because I thought [Matt] Hagan went 3.87 and when we smoked ‘em I thought we’d been knocked out of the top spot. That’s okay. Running under the lights is one thing. Tomorrow we know where it’s at. I’m excited. I don’t want the dream to end.”

Alexis DeJoria matched her best qualifying performance of the 2020 season when he put her RoKIT/Bandero Tequila Toyota into the No. 2 spot with a 3.914 followed closely by Tim Wilkerson, who continued his recent string of solid performances at Gainesville Raceway with a 3.917 for the No. 3 spot. Wilkerson was a runner-up to Capps at the 2020 Gatornationals, held here last September.

One of the most intense battles came at the back end of the Funny Car field where several drivers battled just to make the 16-car show. Jim Campbell held on to the bump spot with a 4.204, narrowly holding off Terry Haddock’s 4.228 while Mike McIntire Jr. also missed the cut.

Four-time world champ Erica Enders came into Saturday as the top qualifier in Pro Stock in her Melling/Elite Camaro but Greg Anderson stole the top spot from his arch-rival on Saturday morning with a 6.525 in his RaceStar Wheels Camaro. Anderson’s run held up through the Saturday afternoon session, and the four-time champion has now qualified at the top of a Pro Stock field for the 107th time in his career. Anderson will be paired with No. 16 qualifier Cristian Cuadra during Sunday’s opening round of eliminations and that round might not be as big a mismatch as it is would seem since Cuadra was just .058-second slower in the tightly-packed field.

Anderson was the quickest on Saturday morning but slowed to a 6.541 in the afternoon run. In that session, Matt Hartford made the quickest run with a 6.532 to put his Total Seal Camaro into the No. 4 spot. Enders also grabbed two qualifying bonus points with a consistent 6.538 while Deric Kramer also earned an extra point with a 6.540, the third-best run of the round.

Angelle Sampey had an eventful day at Gainesville Raceway after the three-time Pro Stock Motorcycle champion not only qualified No. 1 for the 52nd time in her career, but she also became the latest member of the Denso 200-Mph Pro Stock Motorcycle Club with a 200.00 run on Saturday morning. Sampey made headlines for her speed, but the most impressive part of her weekend has been the performance of her new Vance & Hines/Mission Foods Suzuki. Sampey made the three quickest runs of the event with a pair of 6.74 passes and a 6.753. On Sunday morning, Sampey will race her Louisiana neighbor, Michael Phillips.

“This is amazing. I posted a video of my team celebrating on the starting line because I don’t get to see them celebrate very often,” said Sampey. “I’m so proud to have Mission Foods on board this year. This feels like mission accomplished already, but I feel like I have so much more ahead of me. I’m just the lucky rider of this Suzuki. I’m still learning this motorcycle. It’s been a struggle but I’m still going.”

The only other riders in the 6.7s during qualifying were reigning and four-time champion Matt Smith, who rode his Denso EBR to a 6.768, and Joey Gladstone, who wasted no time learning the ins and outs of his new Reed Motorsports Suzuki with a 6.783. Smith will be paired with Jimmy Underdahl while Gladstone is racing Chris Bostick.