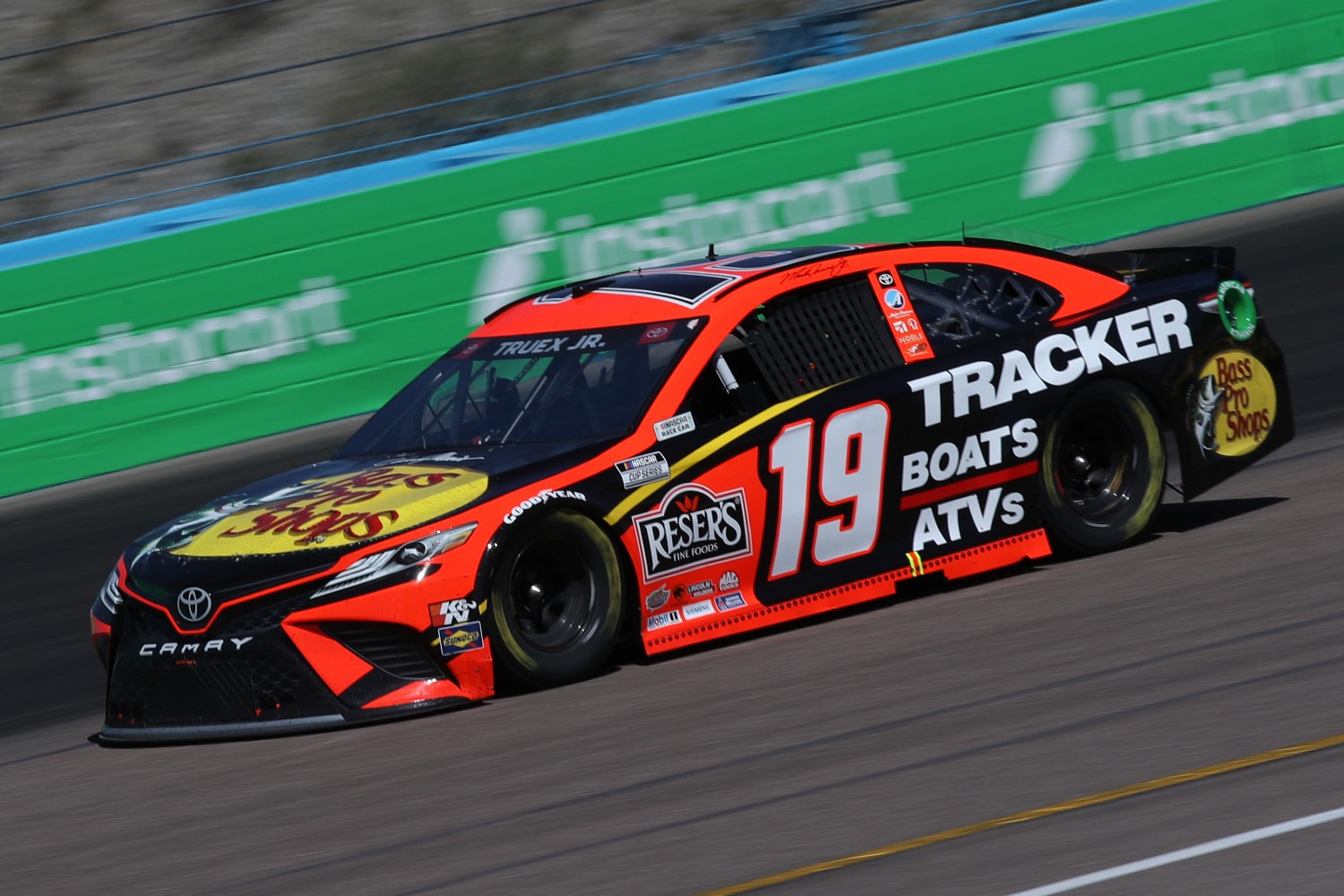 Logano led on the last restart but Truex Jr. drove around the outside of Logano’s Ford in the 3rd and 4th turn and never looked back.

Truex was the 5th different Cup winner in 2021, and it is the first time Truex has won at phoenix after finishing 2nd twice.

“Just an awesome job by everybody, [crew chief] James [Small], all the pit crew guys fixing it, just really solid,” said Truex, who now has 28 career wins. “At the beginning of the race I thought we were going to run 15th or so. Man, I just really can’t believe it. I’m kind of speechless.

“This feels pretty amazing. Phoenix has been a tough one for us.

“I wish it was November and I was in the Final Four,” he added with a smile, referring to the season championship finale at Phoenix Raceway later in the year. “Just so thankful and proud of everyone at JGR, everyone who makes this possible.”

Logano started alongside Truex on the front row for the final restart and mounted a challenge for the lead, but he couldn’t hold off Truex even with a more favorable inside starting position.

“I was surprised he was able to hang with me on that [final] start,” a disappointed Logano conceded of Truex’s winning move. “He had a good start too, but I had a good one on the bottom and I thought might have short-cut it on the dogleg and I thought, boy I might have him cleared. Then we went into that corner still door-to-door and when you’re door-to-door the outside car has control.

“I’m pretty sure even if I beat him even on that start he was still going to hound me and probably get by me. They had the best car. We had a good car for sure, but once they tuned it in toward the second stage, it was the best car on the race track.”

Apart from the competition caution, the first stage remained green until Lap 46. Alex Bowman’s No. 48 Hendrick Motorsports Chevrolet, running 18th at the time, bumped the rear of Ross Chastain’s No. 42 Chip Ganassi Racing Chevy. Then, from behind, the No. 3 Richard Childress Racing Chevrolet of Austin Dillon nudged Bowman in return. Chastain and Dillon sustained very little damage, but Bowman went for a spin into the outside wall.

Lap 88 later saw Anthony Alfredo tear off the rear of his No. 38 Front Row Motorsports Ford after Cody Ware’s No. 51 Petty Ware Racing Chevrolet pushed him into the outer wall. Alfredo’s run ended there in Turn 2.

Tyler Reddick’s No. 8 Richard Childress Racing Chevy smacked the top wall on Lap 261 to bring out the first on-track caution in the final stage. Twenty laps later, Chastain nudged Kyle Busch’s No. 18 Joe Gibbs Racing Toyota into the wall. It set up the final restart with 25 laps to go.

Overall, there were seven cautions and 22 lead changes among nine drivers.

Up next, the NASCAR Cup Series heads to Atlanta Motor Speedway for the Folds of Honor QuikTrip 500.

How much of a team effort was it to bounce back from brushing the wall early and keeping up with the track till the very end?

“Just an awesome job by everybody, James (Small, crew chief), Blake (Harris, car chief) and all the pit crew guys fixing it. I mean really solid. I thought at the beginning of the race we were gonna run 15th or so. Man, I can’t really believe it, I’m kind of speechless. This feels pretty amazing, you know? Phoenix has been a tough one for us and to come here and win this, I wish it was November, but hopefully, we can come back here in November and have a shot at being in the Final Four. Man, just so thankful and so proud of everybody at JGR (Joe Gibbs Racing) and everybody who makes this possible.”

How about the fans? What do you have to say to them?

“It’s the most we’ve seen in a while, and you know the more, the merrier. We love having them, we miss seeing them in the infield and miss prerace, we miss qualifying, we miss practice just like everybody else. It’s great that we’re able to a good crowd here, Phoenix is always awesome. All of the campers out there and just a great crowd. Thanks to all of them. Obviously, I gotta thank Bass Pro Shops. Johnny Morris – this is a good day buddy, hope you caught some fish. Reser’s Fine Foods, Auto Owners, just all of our partners. Oakley, Sherwin Williams, Noble Aerospace, Textron Aviation, everybody who helps us and allows us to do what we love to do. I’ve got an awesome team, we had a tough year last year a little bit up-and-down, little bit rocky, but really proud of them. That was a hell of an effort today by everybody.”

How much did you have to work on this Toyota to get it to the front?

“A lot. About lap 67, I hit the fence off of turn two. Our car was super tight to start off the race. It wasn’t any good at all. I can’t believe I’m standing here right now. What an effort by my guys on the team. It’s just unreal. To hit the fence, to go to the back, to fix it, to make some huge adjustments and for us to be able to run as good as we did at the end there, I’m speechless. This has been a tough track for us. We struggled here in the fall. We came here with a whole new mindset, a whole new focus on trying to figure this place out and I’ll be dammed if we didn’t do it. Hopefully we can keep tuning on this thing and come back for the Final Four in November.”

How good does it feel to have the notebook you have after today?

“Just to have the speed that we had and to be good on the long run at the end, and to be able to take the lead on the restart against a couple of guys who are good here each and every time. Look at the 22 (Joey Logano), the 2 (Brad Keselowski) and the 11 (Denny Hamlin), those guys are always good, and we’ve been searching. I’m really proud of James (Small, crew chief) and ‘Jazzy’ (Jeff Curtis, engineer) who came up with the setup here. Like I said, we will go home and figure out to be better, and tweak on it. This is just unbelievable. Unbelievable day for Bass Pro Shops, Toyota, TRD, this Camry was smoking fast. I just want to thank all of the men and women at JGR (Joe Gibbs Racing) that make it possible to let us drive these things. Man, all of our sponsors. It’s a dream come true to drive these cars and be out here in front of these awesome fans. Hopefully, we can put together a good season and win some races. One win last year was disappointing for us. We were close a lot of times, but we want to win bunches, and we want to go for another championship, so hopefully this will be good momentum for us right here.”