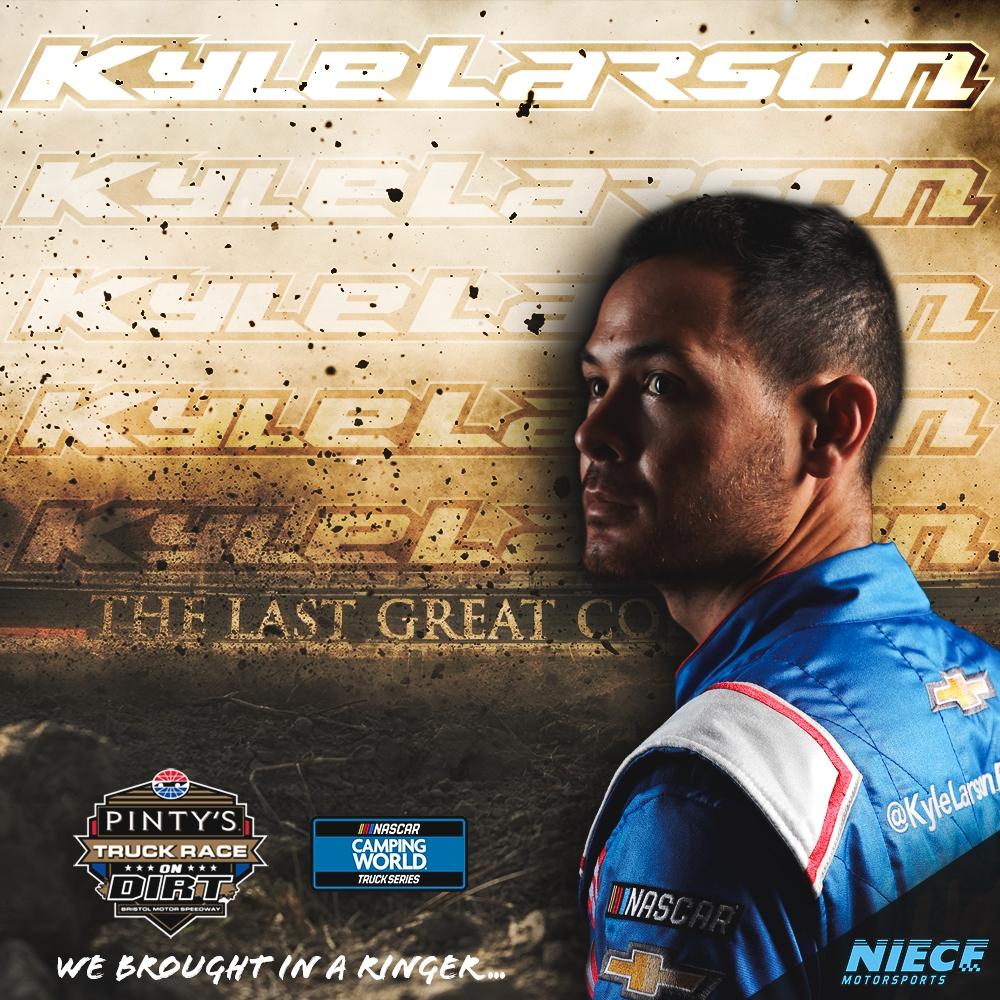 Larson, who is no stranger to racing on dirt, won at Eldora Speedway in the Truck Series in 2016.  The Elk Grove, Calif. native will pilot the No. 44 Rich Mar Florist/CircleBDiecast.com Chevrolet Silverado.

“I really appreciate the opportunity given by Niece Motorsports,” said Larson.  “I’m excited to get back into a truck at one of my favorite race tracks.”

The 28-year-old driver has built an extensive and impressive racing resume with more than 250 career race wins.  Larson has won in every racing circuit he has competed in. Most notably, Larson has earned seven victories in the premier NASCAR Cup Series and won the prestigious Chili Bowl Midget Nationals twice in 2020 and 2021, the NASCAR All-Star Race in 2019, and the Rolex 24 at Daytona in 2015.

He also won the 2011 4-Crown Nationals at Eldora Speedway, winning in all three types of USAC cars in a single night, only the second driver in history to accomplish the feat.

In 2020 Larson turned in one of the most impressive years in the history of dirt-track racing.  While primarily driving sprint cars, he racked up 46 victories in 97 attempts. Larson led the World of Outlaws Sprint Car Series in victories with 12 despite competing in only 26 of its 54 events and he secured his first Lucas Oil Dirt Late Model Series win.

“Kyle is obviously one of the best drivers out there today,” said Niece Motorsports General Manager Cody Efaw.  “His resume on dirt speaks for itself.  We are looking forward to him joining the organization at Bristol and contending for a win.”

The No. 44 Chevrolet will carry the Rich Mar Florist and CircleBDiecast.com colors under the lights at Bristol Motor Speedway.

The Rich Mar Florist story began with the vision of Richard P. Morrissey, his wife, Dolores A. Morrissey, and his parents, Frieda and Vincent Morrissey.  Together, they founded the company in 1955 in Allentown, Pa.

Since its inception, Rich Mar is renowned for its service across Pennsylvania, as the award-winning floral provider has become a community staple in its Allentown and Bethlehem locations.  Building upon its already stellar reputation, the family-owned and operated business has blossomed into the trusted florist of Pocono Raceway, Dover International Speedway and both Lehigh Valley professional sports organizations.

“We’re looking forward to taking part in this historic event for the Truck Series and are excited to be alongside Kyle for what is sure to be a stellar performance,” said Jonathan Morrissey, co-owner of Rich Mar Florist.  “This is a huge announcement for Rich Mar Florist Racing Nation and those that support our involvement in NASCAR.  We are extremely thankful for this partnership with Niece Motorsports and are thrilled to share this historic moment together.”

Plan B Sales, who has partnered with Larson for multiple wins on dirt, was founded in 2010 with the goal of bringing service to dealers that carry licensed motorsports product.  Plan B Sales started as a Lionel diecast and Chase Authentics apparel distributor.  Over the last few years Plan B Sales has grown to be the largest account for Lionel servicing the motorsports market and has expanded product offerings.

Plan B Sales has quickly become the choice of dealers for a stocking one-stop distributor.  Its product offering also includes Auto World, Greenlight Collectibles, BrandArt and are the exclusive distributor for University of Racing product lines.

In September of 2020, Plan B Sales decided to split its wholesale and retail business into two different websites to better serve each segment of customers, effectively launching CircleBDiecast.com.

The Truck Series will be on track Friday, March 26 for practice, and will race on Saturday, March 27 at 8:00 p.m. ET, airing live on FS1, MRN and SiriusXM NASCAR Radio.