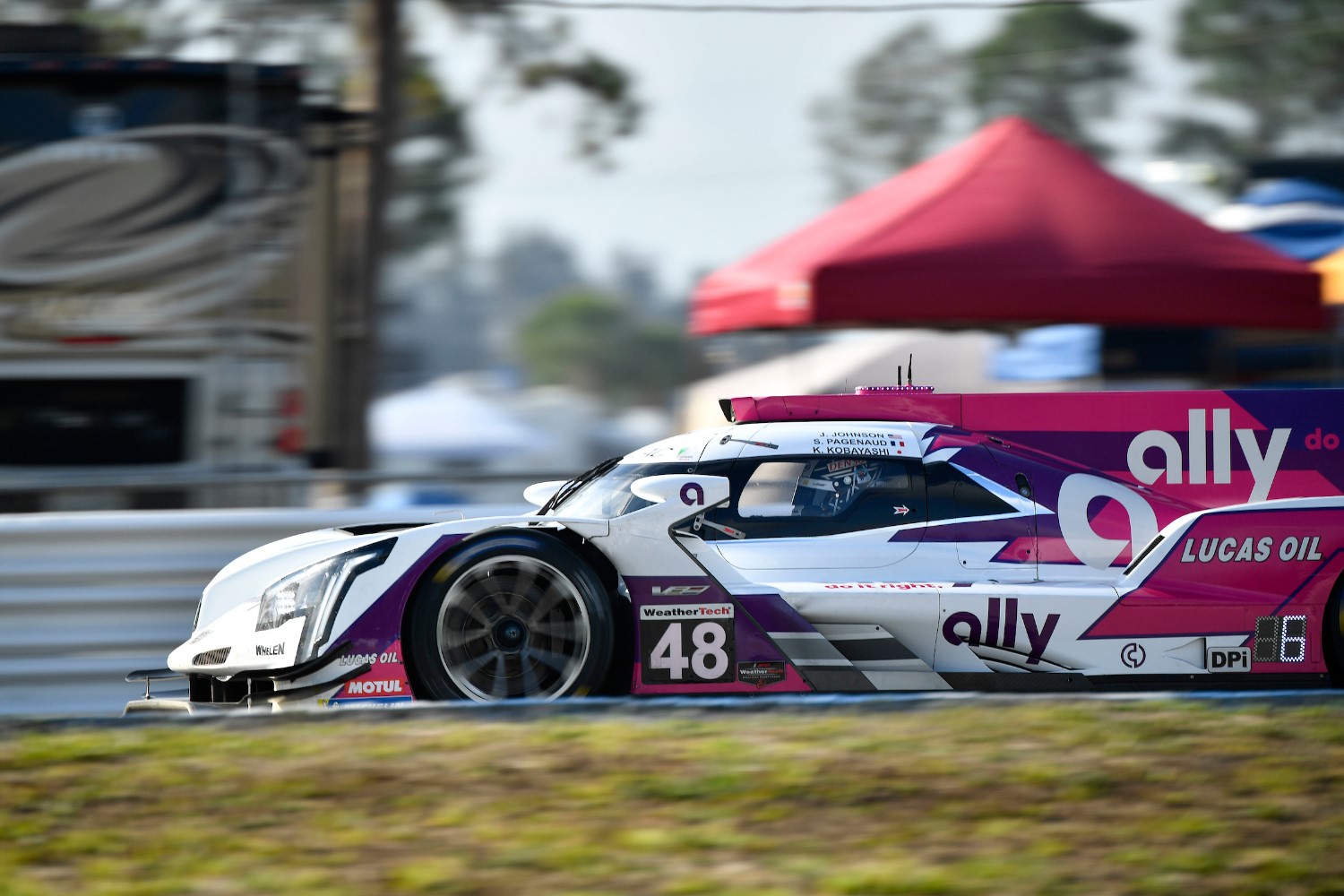 Jimmie Johnson (Shown above), the seven-time champion who retired from NASCAR at the end of the 2020 season, is using Saturday’s Mobil 1 Twelve Hours of Sebring Presented by Advance Auto Parts to further his transition to a part-time role in the IndyCar Series later this season.

The two types of cars – the IMSA Daytona Prototype international (DPi) and the Dallara he’ll drive in the IndyCar Series – are remarkably similar, Johnson explained Thursday at Sebring.

“They are different animals, but they are closer together than probably any other car in North America,” Johnson said. “I’ve tried Formula 3 and some other cars, but the IndyCar is just so fast and has so much potential. This IMSA car is really the closest thing I can get in.”

In January, Johnson teamed with Kamui Kobayashi, Simon Pagenaud and Mike Rockenfeller to finish second in the No. 48 Action Express Racing Cadillac DPi-V.R in the Rolex 24 At Daytona, the 2021 season opener for the IMSA WeatherTech SportsCar Championship.

On Saturday, he’ll team with Kobayashi and Pagenaud in the No. 48 Ally Cadillac at Sebring. The trio will also race in the remaining two IMSA Michelin Endurance Cup events later this season. The experience in the sports car has helped Johnson adapt to the No. 48 Chip Ganassi Racing Honda he’s tested but won’t race until that series’ season opener April 18 at Barber Motorsports Park in Birmingham, Ala.

Johnson has only had a few hours of testing in the CGR Honda, which he’ll share with Tony Kanaan this season. Meanwhile, the Action Express Cadillac has been a reasonable facsimile.

“It has been useful for me,” Johnson said. “These reps have been useful. I think I’ve only had five days in the IndyCar.”

Retraining himself for different cars and different tracks has been the most difficult aspect of the transition.

“I’m really just trying to forget all these dependencies I had driving a NASCAR vehicle and trying to rewire my brain and my senses,” Johnson said. “I feel like I’m making good progress. I think I’m down to little gains now. I probably got all the big chunks. Now it’s down to all of those little chunks, which are the hardest to get.”

It didn’t help matters for Johnson and his teammates that a throttle issue limited them to nine timed laps in Thursday’s first two practices.

“We’ve got some issue there where the throttle is still carrying us through the turn and not returning back to zero,” Johnson said. “A couple exciting moments that we’re trying to get to the bottom of and it’s pretty intermittent.”

The No. 48’s stablemate at Action Express, the No. 31 Whelen Engineering Racing Cadillac was quickest in each of the first two sessions. Felipe Nasr posted a lap of 1 minute, 46.212 seconds (126.765 mph) in the first practice that ranked best overall.

Other leaders by class after the first two practices were:

Thursday’s 90-minute night practice was the final session prior to qualifying at 11:15 a.m. ET Friday (live stream on IMSA.com). The 69th Mobil 1 Twelve Hours of Sebring takes the green flag at 10:10 a.m. Saturday. The live telecast begins at 10 a.m. on NBCSN, slides to the NBC Sports App and NBCSports.com at noon and returns to NBCSN from 7 p.m. through the race conclusion. The entire telecast is available on TrackPass on NBC Sports Gold. IMSA Radio coverage airs on IMSA.com, RadioLeMans.com and SiriusXM Radio (Sirius channel 216, XM 392, Internet 992).

No yellow? No problem.

The talk of the paddock so far this week at Sebring International Raceway is the special silver liveries debuted Wednesday by Corvette Racing for its two entries in Saturday’s Mobil 1 Twelve Hours of Sebring Presented by Advance Auto Parts.

Or, perhaps more specifically, the buzz focused on the lack of the traditional Corvette competition yellow on the team’s No. 3 Corvette C8.R co-driven by Antonio Garcia, Jordan Taylor and Nicky Catsburg and the No. 4 C8.R co-driven by Tommy Milner, Nick Tandy and Alexander Sims.

It’s the first time since 1999 that Corvette Racing has fielded two silver entries.

So far, the reaction has been largely positive – especially when fans are told the new colors are part of a one-off promotion.

“The special liveries are pretty spectacular,” Tandy said. “Race car liveries are iconic. The winning liveries go down in history. The cars are reproduced in other forms. Their pictures are seen in pictures for years to come.”

The colors celebrate the 25th season – the silver anniversary – of the technical sponsorship between Corvette Racing and Mobil 1. Together, they’ve teamed for 114 wins, including a sweep of the GT Le Mans (GTLM) class in the IMSA WeatherTech SportsCar Championship season opener in January at Daytona.

“If you look at the history of Corvette Racing, it’s been predominantly yellow,” Taylor said. “The one-off, unique paint schemes are just as famous as these ones because it’s so rare that Corvette changes their colors. For us to do a one-off livery like this just shows how much the Mobil 1 relationship means to the team.”

Like fans, the Corvette drivers hadn’t seen the new colors until they arrived at Sebring. Aside from their numbers, the cars are differentiated by a lower stripe and nose trim – red on the No. 3 car, white on the No. 4.

“The first time I saw the cars was when I walked into the race paddock (Wednesday) morning,” Tandy said. “We’re just the biggest fans of race cars and how they look and the special liveries and things like this as much as anyone I know. It was good to see.”

Corvette Racing has used promotional liveries in the past. At the Rolex 24 At Daytona in 2001, Dale Earnhardt and Dale Earnhardt Jr. were teammates in the No. 3 Corvette Racing CR.5. While carrying the traditional yellow colors, it featured Earnhardt Sr.’s Goodwrench NASCAR sponsorship and a stylized No. 3 to match the number on his Cup Series car.

While most of the online reaction so far at Sebring has been positive, some bemoaned the lack of yellow. (Don’t worry, folks. It will return.)

“I understand people’s reaction, but at the same time … it was cool to see people posting the old one-off Corvette liveries like the Goodwrench one,” Taylor said. “Those are iconic looks. After this weekend, this will be an iconic look and we’ll be seeing pictures and videos of the Mobil 1 livery that did the Sebring 12 Hour in 2021 for years to come.”

The new colors didn’t slow the No. 3 Corvette. Taylor was fastest in class after the first two practices on an anniversary weekend of his own. It was 10 years ago at Sebring that he made his first Corvette start.

“It feels like a long time ago in a lot of ways and in a lot of other ways it doesn’t,” Taylor said. “Back then, I was so young and I’d say naïve to be in that position at such a young age; I don’t think I realized what position I was in back then. Now I respect it a lot more being a Corvette Racing driver, seeing the fan base, the history of the team and the cars. When I was there when I was 21, I was just this kid who was happy to be racing race cars.

“Going back to Sebring all these years later, I feel like I’m a much better driver as a whole, and in the same breath I’m appreciative of the position that I’m in, that I continue to get the support and trust from a team like Corvette Racing.”

“I got the call from John (Wright) a couple days ago for this first GT4 race, so I had to figure it all out,” Root said, “but they made it super easy on me. My co-driver Jan (Heylen) helped me out with some data and it was a pretty smooth lap. We’re in a good spot for the race tomorrow and that’s what we’re here for.”

“It took until the end of the session, but we finally got a good lap in,” Henderson said. “The guys were on the radio with me and let me know we needed just a few more tenths (of a second). I think I got ’em in the last few sectors. Really happy with that, really happy with the team. Atlanta Speedwerks has been doing a great job and we appreciate Honda Performance Development’s support.”