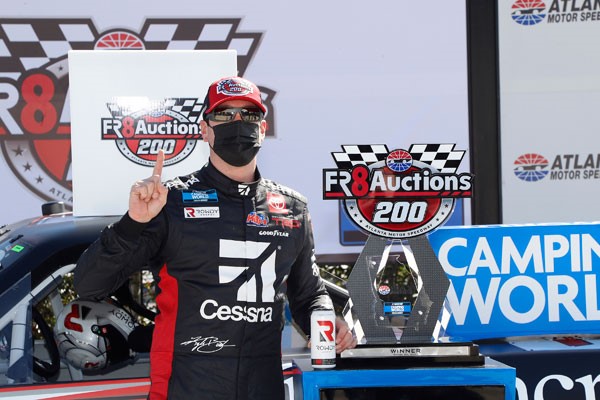 Leading 102 of 130 laps and pulling away in the final stage of Saturday’s Fr8Auctions 200 at Atlanta Motor Speedway, Busch notched his first victory of the season, his sixth at the 1.54-mile track and the 60th of his career—extending his own series record.

It was his 60th Camping World Series Truck race victory.

Busch beat runner-up Austin Hill to the finish line by 4.133 seconds. Third was John Hunter Nemechek, who had held off Busch, his car owner, to win the last Truck Series outing at Las Vegas Motor Speedway.

“I thought we had a great truck at the start of the race,” said Busch, who collected his 214th NASCAR national series win. “We just kept working on it all day. We were loose to start, and we got it a lot better there. That final stage, we just took off, and it was super-fast, super-good. Can’t say enough about everybody at Kyle Busch Motorsports.”

Busch led most of the first two stages, but at the end of each, he surrendered the top spot to Nemechek, who picked up a pair of Playoff points for the stage wins. But Busch beat Nemechek off pit road on Lap 63 during the Stage 2 break and held it the rest of the way, save for a cycle of green flag stops that put Chase Purdy out front from Lap 102 through 105.

The race featured three cautions, one for a planned competition yellow after Lap 15 and two for the stage breaks. With the race going green for the final 63 circuits, Hill never had a chance to test his No. 16 Toyota against Busch’s No. 51.

The victory was the first for crew chief Mardy Lindley, who joined Kyle Busch Motorsports this year. The only improvement Busch could have wished for was a 1-2 finish for KBM instead of a 1-3.

“Anytime I’m in my truck, I want to be able to go out there and score the victory,” Busch said. “With good competition and good competitors, it’s not easy. With John Hunter coming on board, at Vegas he was super-fast and did everything right, no mistakes.

“We’ll go back and regroup and make sure that 4 truck (Nemechek) can stay in front of that 16 truck (Hill) the rest of this year.”

What does winning, especially the way you did today, do for you mentally?

“It’s just a great opportunity to race in great stuff with KBM (Kyle Busch Motorsports), Cessna Beechcraft. This Toyota Tundra was awesome. I can’t say enough about my guys, everybody at Kyle Busch Motorsports. They do such a great job with a lot of hard work. Without their preparation and dedication, we wouldn’t be as successful as we’ve been as an organization. It’s great to get back to Victory Lane. It’s cool to get back to Victory Lane in Billy Ballew’s (former NCWTS team owner) backyard here in Atlanta. We carried the Billy Ballew Motorsports decal today. If you need a deal on a sweet used car, go see him in Dawsonville. All of the Chase Elliott fans want to go there, but tell them that I sent ya.”

Marty Lindley, your crew chief, you brought him to KBM. He got his first win today. What does he bring to this team?

“It’s just a part of good people, having good people. Coach (Joe Gibbs) always says you have to have good people to have success. We’ve had great people, and we’ve had good people too and it’s just a matter of evolving. This sport is ever-changing. Six months from now the setups will be different again. It’s cool to have fresh ideas, different concepts and things that we can continue and try and continue to improve. It’s good to see John Hunter (Nemechek) come home with another top-three today with him racing for a championship this year, that’s important. Certianly, I want to give a shoutout to Samantha (Busch) and Brexton (Busch) at home. Brexton is racing tomorrow, so he didn’t make it this weekend, so good luck buddy. Thank you to Rowdy Energy, Murphy USA for being on board today.”

Did you think win 60 in the Truck Series was attainable?

“Yeah, obviously I thought we had a great truck at the start of the race. We just kept working on it all day. We were loose to start and we got it a lot better there. That final stage, we just took off and it was super fast, super good. Can’t say enough about everybody at Kyle Busch Motorsports – thank you. Thank you to Cessna Beechcraft, TRD, Toyota and Rowdy Energy, Murphy USA. Billy Ballew, if you need a used car in the Dawsonville area, I know that’s Chase Elliott country, but tell them that Kyle Busch sent you.”

What contributions has Marty Lindley made to Kyle Busch Motorsports thus far?

“It’s all about great people. You win with great people in this sport and we’ve had great people and we still have good people. Just bringing Marty (Lindley, crew chief) on has been a refresher if you will. Six months from now, setups may not be the same and so just having some of those fresh ideas and some of those different concepts that we can apply to our Tundras to make sure we can go out there and continue to win and have good days like we did with John Hunter (Nemechek) and myself and race for that championship.”

Did you leave Las Vegas wanting to win in this series that much more?

“Yeah, absolutely. Anytime I’m in my truck I want to be able to go out there and score the victory. With good competition and good competitors, it’s not easy. With John Hunter (Nemechek) coming on board, at Vegas he was super fast and did everything right, no mistakes. We’ll go back and regroup and make sure that 4 (Nemechek) truck can stay in front of that 16 (Austin Hill) truck the rest of this year.”