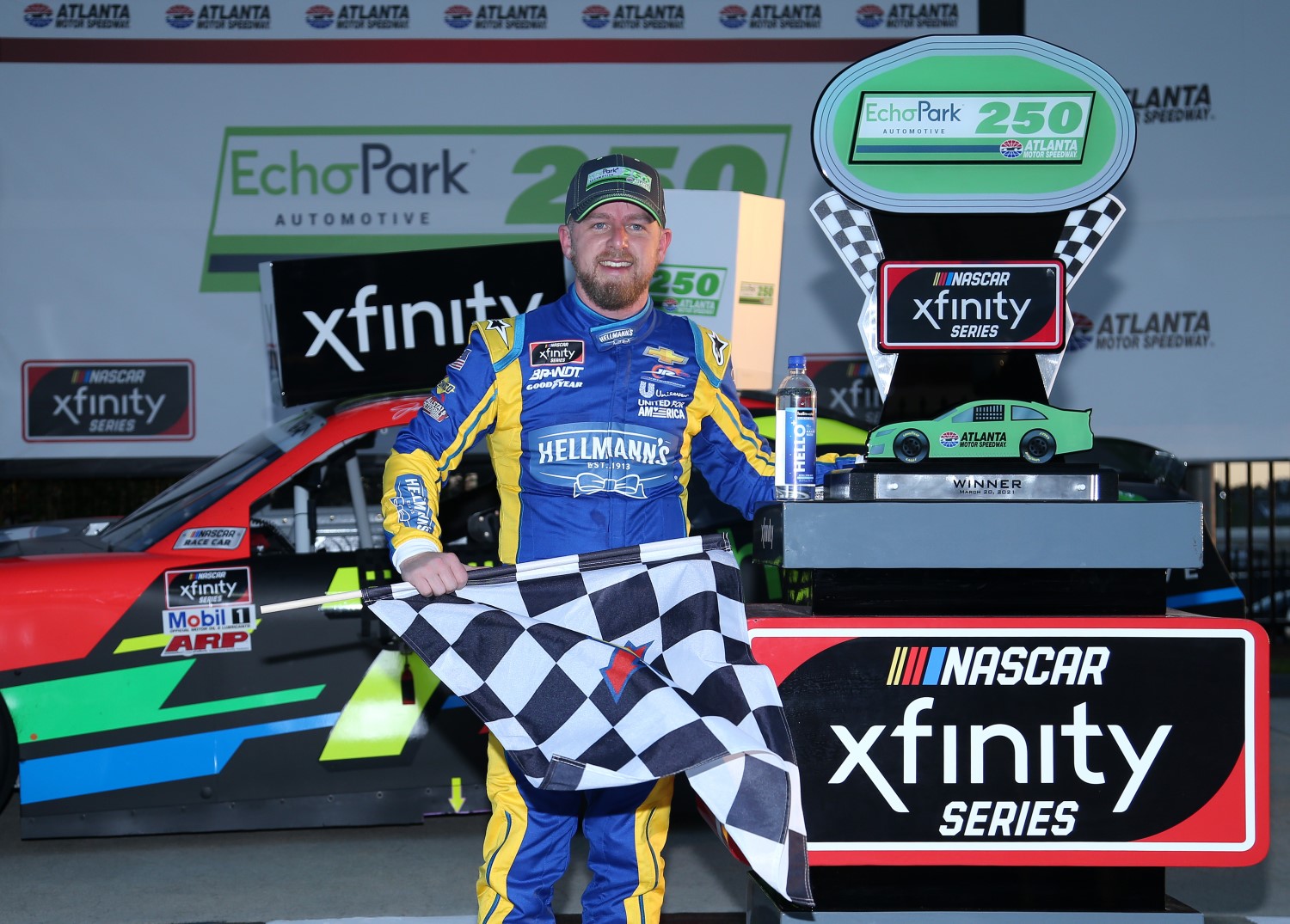 Even so, Allgaier had to hold off Truex during a 26-lap, green-flag run to the finish to win the EchoPark 250 NASCAR Xfinity Series race at Atlanta Motor Speedway.

“We didn’t start out the day like we wanted to—these guys persevered behind it,” said Allgaier, who picked up his first win of the season, his first at Atlanta and the 15th of his career. “They pushed and made great adjustments on pit road—(crew chief) Jason Burdett and all the guys on the team did a great job. My wife and daughter are here. They may not be able to come out here (to Victory Lane), but I get to go celebrate with them. Just proud of the effort that we put in today.

“Martin had a great race car. They definitely had the car to beat at the beginning. We made good adjustments, and that’s what it came down to at the end.”

Harrison Burton ran third, followed by Noah Gragson, who recovered from a Lap 40 wreck and ended his day exchanging blows on pit road with Daniel Hemric—the result of an earlier pit road altercation between their two cars.

A pit road speeding penalty under caution on Lap 114 of 163 spoiled what had been the Truex show up to that point. Truex, who won the first two stages and led 103 laps, restarted at the back of the field on Lap 118 and spent the rest of the race working his way back to the front, aided by two subsequent cautions.

But Truex used up his No. 54 Toyota charging into the runner-up position and had little left for Allgaier in the closing laps.

“We got back up there, but obviously, we were kind of out of tires at that point,” said Truex, a two-time Xfinity champion who was racing in the series for the first time since 2010. “Got close, and then the last 10 (laps), the right rear was completely smoked off. Just had to use too much to get there.

“Thanks to (sponsor) Stanley and everyone else at JGR for letting me go do this. It was fun until I screwed it up. Just came up a little short at the end there.”

Hemric confronted Gragson after the race for backing into the No. 18 Joe Gibbs Racing Toyota on pit road. Hemric had to pull into Gragson’s stall to avoid a car blocking his own pit box. After Hemric backed into his own stall, Gragson entered his and backed into the nose of Hemric’s Supra as crew members scattered.

“I got a hole in the nose of my car, and he got popped in the eye, so I’d say we’re in good shape,” Hemric said after the combatants were separated and had a chance to cool down.

A multicar wreck on the final lap of Stage 1 ruined the winning chances of a handful of contending cars. Contact from Brett Moffitt’s Chevrolet turned Brandon Jones’ Toyota into the outside wall on the backstretch.

Moffitt fell out of the race in 40th place, and Jones finished 37th, 31 laps down. The No. 22 Ford of series leader Austin Cindric, as well as the Chevrolets of AJ Allmendinger and Gragson, all sustained enough damage in the chain-reaction crash to affect their performance adversely.

Gragson and Allmendinger recovered to finish fourth and fifth, respectively. Cindric came home 13th, as his streak of five straight top-five finishes to start the season came to an end. By Reid Spencer