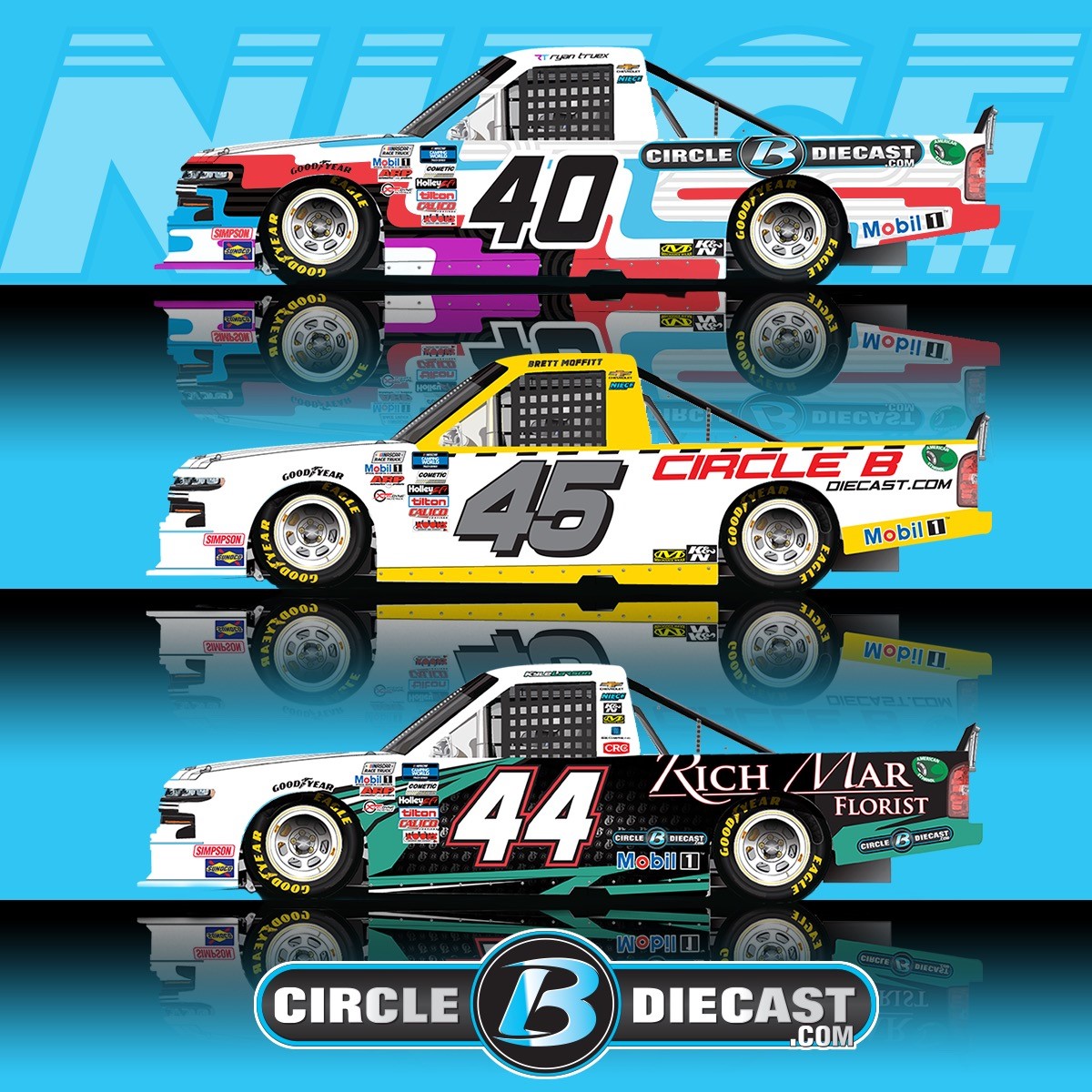 “Plan B Sales and Circle B have really stepped up to support our race team over the past few seasons, and I’m excited to see that commitment to our team continue to grow,” said Niece Motorsports General Manager Cody Efaw.  “Our whole organization is excited to race on dirt this weekend in Bristol.  We are looking forward to an exciting race and putting on a good show for the fans and our partners.”

“This a really special opportunity to honor Barefoot Bob and his contributions to dirt racing,” said Moffitt.  “Our CircleBDiecast.com Chevrolet looks great.  I’m really excited about this weekend’s race.  It’s going to be a challenge, but I also think it will be a lot of fun.  Hopefully, we can make Bob proud.”

McCreadie, an incredibly accomplished race car driver, raced across the United States, Australia, and Canada.  He is credited with 507 wins, from 1975-2005.

“I’m honored that Niece Motorsports is running a paint scheme that so many people in the Northeast saw race every Saturday night,” said McCreadie.  “I’ll be watching the race and would love to see those colors up front again.”

“Racers like Bob McCreadie are the reason I got into racing, and it’s an honor to recognize his contributions to the sport,” said Efaw.  “He was one of the best, racing against teams with much larger budgets.  People like Bob are what make racing great.”

In addition to Rich Mar Florist, Larson’s No. 44 Chevrolet Silverado will carry the CircleBDiecast.com colors.

“Brent and Ladonna are such great people,” said Larson.  “They have always supported me and my dirt racing, so it’s cool to have CircleB as a sponsor on my truck.”

Larson has built an extensive and impressive racing resume with more than 250 career race wins.  The 28-year-old driver has won in every racing circuit he has competed in. Most notably, Larson has earned seven victories in the premier NASCAR Cup Series and won the prestigious Chili Bowl Midget Nationals twice in 2020 and 2021, the NASCAR All-Star Race in 2019, and the Rolex 24 at Daytona in 2015.

He also won the 2011 4-Crown Nationals at Eldora Speedway, winning in all three types of USAC cars in a single night, only the second driver in history to accomplish the feat.

In 2020 Larson turned in one of the most impressive years in the history of dirt-track racing.  While primarily driving sprint cars, he racked up 46 victories in 97 attempts. Larson led the World of Outlaws Sprint Car Series in victories with 12 despite competing in only 26 of its 54 events and he secured his first Lucas Oil Dirt Late Model Series win.

“We’ve been fortunate enough to experience success with Kyle on the dirt and we are hoping to see that continue this weekend across the board with Niece Motorsports,” said CircleBDiecast.com Owner Brent Powell.  “It’s a dream come true to have three CircleBDiecast.com trucks in this race, we are thrilled and are excited to see the trucks get on track.”

In addition, Truex will race a CircleBDiecast.com paint scheme in his No. 40 Chevrolet as the NASCAR Camping World Truck Series prepares to race at Bristol Motor Speedway on dirt for the first time.

“Our CircleBDiecast.com Chevrolet looks great,” said Truex.  “I’m so appreciative of CircleB and Marquis’ support.  We would not be able to do this without their help.  I’m excited for Saturday night’s race.  I definitely think it’s going to be an entertaining night for all of the fans.”

Plan B Sales was founded in 2010 with the goal of bringing service to dealers that carry licensed motorsports product.  Plan B Sales started as a Lionel diecast and Chase Authentics apparel distributor.  Over the last few years Plan B Sales has grown to be the largest account for Lionel servicing the motorsports market and has expanded product offerings.

Plan B Sales has quickly become the choice of dealers for a stocking one-stop distributor.  Its product offering also includes Auto World, Greenlight Collectibles, BrandArt and are the exclusive distributor for University of Racing product lines.

In September of 2020, Plan B Sales decided to split its wholesale and retail business into two different websites to better serve each segment of customers, effectively launching CircleBDiecast.com.

The NASCAR Camping World Truck Series will be on track Friday, March 26 for practice, and will race on Saturday, March 27 at 8:00 p.m. ET, airing live on FS1, MRN and SiriusXM NASCAR Radio.