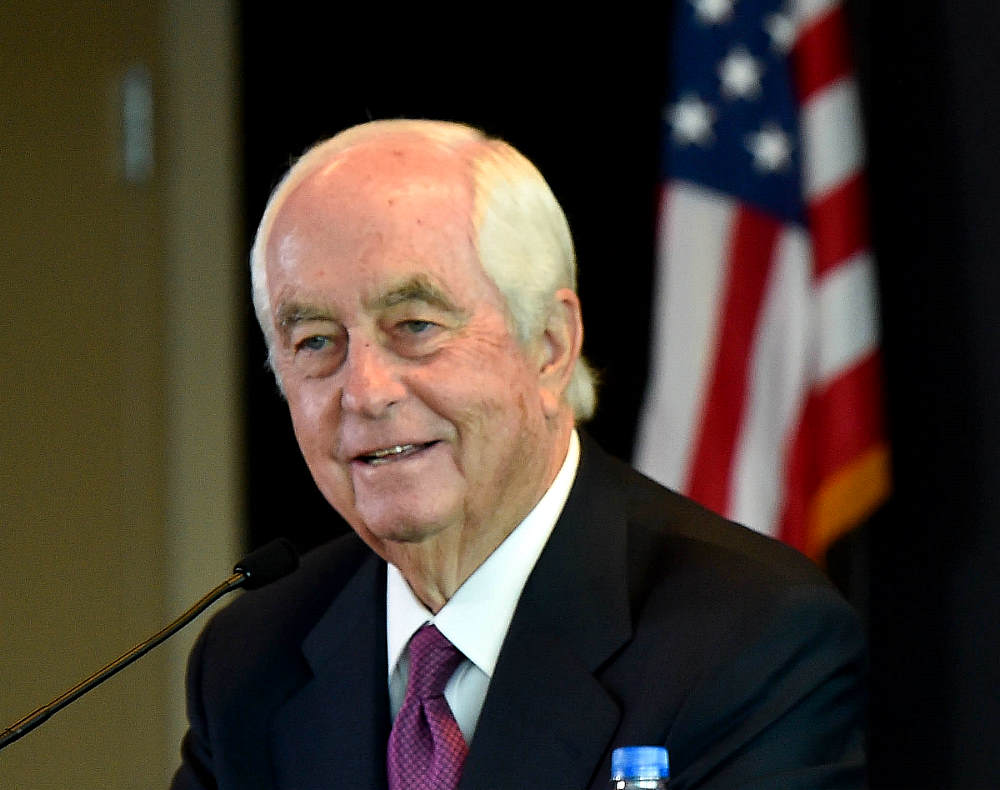 This rumor is downgraded to ‘false’ today. CBS Sports Chairman Sean McManus says “there’s no room at the inn” at CBS for other motorsports properties at this time, and the network is not currently talking to other series.”

This rumor is downgraded to ‘speculation’ today.

Penske Entertainment CEO Mark Miles told Inside Indiana Business that they are looking to come to a new deal with NBC to keep broadcasting NTT IndyCar Series races on TV. Miles is confident they can make it happen.

“I think NBC has been a great partner,” Miles said. “This has been the first period of time that we’ve had one (TV) broadcast partner in the U.S. As you know it was previously it was split between two broadcasters, some on network and some on cable.”
A new deal will likely need to be reached soon considering that NBC is shutting down NBCSN at the end of the year. The all-sports cable TV network has been the broadcast home for most, if not, all of NBC’s auto racing coverage between IndyCar, IMSA, and NASCAR.

“There is a lot to work through,” Miles added. “We’re interested in growing the amount of promotion, the amount of events that might be on network television. What will the streaming opportunity be? What is the role for cable?”

“All I know is that we are fans of this relationship and want it to continue.”

If another network wants to take IndyCar away from NBC, Flood said it will be very difficult for that team to set coverage standards and beat what they have done, despite their horrible TV ratings – last year’s Indy 500 TV rating was the lowest in history.

“As a partnership, as a sport growth, and in collaboration with the IndyCar team, we are truly proud of everything we have achieved in the last few years and hope to continue in the future. “Flood said. “That’s the way we go this season, and we plan to partner for the long term.”

Mark Miles, president and CEO of Penske Entertainment Corp., which owns the NTT IndyCar Racing Series, refuted the report’s “account of where [IndyCar and NBC are] in negotiations.” He said the current broadcast pact was always set to expire at the completion of the ’21 season, and with no back-end rights in the deal, IndyCar has “been free from the day [it] signed [with NBC] to talk to the marketplace” (i.e. the fact that discussions are ongoing is not particularly newsworthy). He added the open-wheel racing circuit was “definitely still engaged in important conversations” with NBC. A decision on IndyCar’s media rights future should be made within a matter of weeks.

Chris Lencheski, chairman of Phoenicia Sport and Entertainment (an adviser to media companies and private equity firms), believes CBS could be a sensible landing spot for the open-wheel racing circuit. ABC (which carried the Indy 500 every year from 1965 through 2018) and FOX would also seemingly suit the sport’s needs.

CBS’ renewed focus on motorsports (see: Formula E deal, launch of Superstar Racing Experience) makes it a logical home for IndyCar should a split occur, Lencheski said. Like NBC, CBS can air some races on network television, slot the balance on a cable network (CBSSN) and run practice/qualifying on their OTT service, Paramount+.

It’s safe to assume the majority of IndyCar races will air on network television next season regardless of where the rights end up. “We believe [the sport] is in the early stages of its growth mode,” Miles said. “And in that context, for the teams, our tracks and the series itself—we of course care about rights fees—but audience [size] is the highest priority. It is very unlikely we would rely solely on any of the [streaming] platforms for our live coverage in the short term.” Of course, if the goal is to maximize reach, it wouldn’t make much sense to sign an exclusive deal with a broadcaster.

While IndyCar is prioritizing eyeballs and seeks to increase the number of “live network events” (i.e. races on broadcast television) during this round of negotiations, Miles mentioned the sport does not want to be “last adopters to streaming and disruptive technologies … The alchemy here is to find an arrangement that allows [the series] to continue to have a growing audience while not altogether being on the sidelines with [digital].”

Lencheski said IndyCar would be wise to align with Amazon as a complement to its linear broadcast partner. “The smartest tactic Formula One has employed was developing the Drive to Survive anthology with Netflix,” he said. “It enabled the casual customer to get familiar with the drivers and story of F1. People relate with people. They relate with the storyline. Amazon is a perfect partner for IndyCar because they can tell a great story. They [also] have a scalable strategy that could sell tickets, licensing and merchandise, all of the things they do or are planning to do with the NFL.” Dialogue between IndyCar and the e-commerce giant is believed to be ongoing. Amazon said in a statement “as a matter of company policy we don’t comment on rumors or speculation.”

Miles did not want to comment on his conversations with any specific streaming service. But he did say the idea of signing a deal with a broadcast network and then a secondary pact with the likes of Amazon or Apple is not as cut and dry as it sounds. “Most of the linear broadcasters, if they are going to make a major commitment to you, then they want their streaming platform to be your streaming option.”

Look for IndyCar to retain its international media rights, as it has since 2019, regardless of whom it eventually decide to partner with domestically. Doing so enables the sanctioning body to capitalize on driver success (in terms of exposure or rights fees). “It’s not surprising that when you have a driver from France, who is well-known in France, who is having success or is doing something new—like Romain Grosjean—that our licensees audience goes up considerably,” Miles said. With more than half of the series’ drivers from international locales (22/34, from 14 different countries) there is an opportunity to go market by market and unlock economic value as those individuals find success. It’s worth noting that most of IndyCar’s existing deals abroad have one or two years remaining. Sportico

It’s not that the media world and Wall Street didn’t expect AT&T to spin off WarnerMedia — the consensus has been that this experiment has not been going well. But a deal appears to be coming both faster than expected and not in the form that many people anticipated.

It appears that AT&T is about to do a deal with Discovery that top sources believe will mean the ascent of Discovery president and CEO David Zaslav, 60, and a likely changing of the guard at WarnerMedia. Caveat: The words you are about to read involve speculation but not uninformed speculation. With that, a few takeaways:

Deal or no deal, this gets the ground in Hollywood shaking. Before it emerged that Discovery was in the game, the betting had been that NBCUniversal would make off with the WarnerMedia assets, including premium cabler HBO, Warner Bros. studios and Turner networks like TNT and TBS. A decision to make an offer would have been up to NBCU owner Comcast, which may have hesitated and lost out on the chance. Now sources believe NBCU will turn its sights on ViacomCBS…….and of course the rumor is that CBS is the leading contender to win the new IndyCar TV contract.

If NBC is walking away from IndyCar, what would it mean if IndyCar did a TV deal with CBS only to have NBC buy CBS?

Hence, yet another reason why the only logical TV partner for IndyCar is ABC/ESPN.

Will this month’s Indy 500 be NBC’s last? NBC Sports Group, which last month walked away from NHL rights after 16 years, is heading down the same path with IndyCar, according to sponsorship and media sources that spoke to Sports Business Journal. Negotiations between NBC and IndyCar have not broken off — they still are taking place, a network source said. But both sides are beginning to envision life without the other.

CBS is the likely beneficiary. CBS Chair Sean McManus told SBJ a few weeks ago that the company would look into other auto racing rights when their deals came up for renewal. McManus, whose network will begin airing the Superstar Racing Experience this summer, said, “If auto racing rights come up, we’ll take a good look at them.”

According to AutoRacing1.com sources, ABC/ESPN/ESPN International are also in the running.  ABC was the exclusive broadcaster for the Indy 500 from 1971 to 2018, and before that on ABC Wide World of Sports from 1965. It was quite a run.

Now ESPN does all the F1 broadcasts commercial free using the Sky Sports feed. But, are they willing to get back into motorsports doing their own production?

IndyCar was dumb enough to leave money on the table for the current TV deal – ABC/ESPN offered more money than NBC/NBCSN, and more races on network TV – but new boss Penske is more intelligent than that.

Roger Penske is seeking an increase in the value of @IndyCar‘s media rights, per sources, as the series negotiates its first such deal with him in charge.