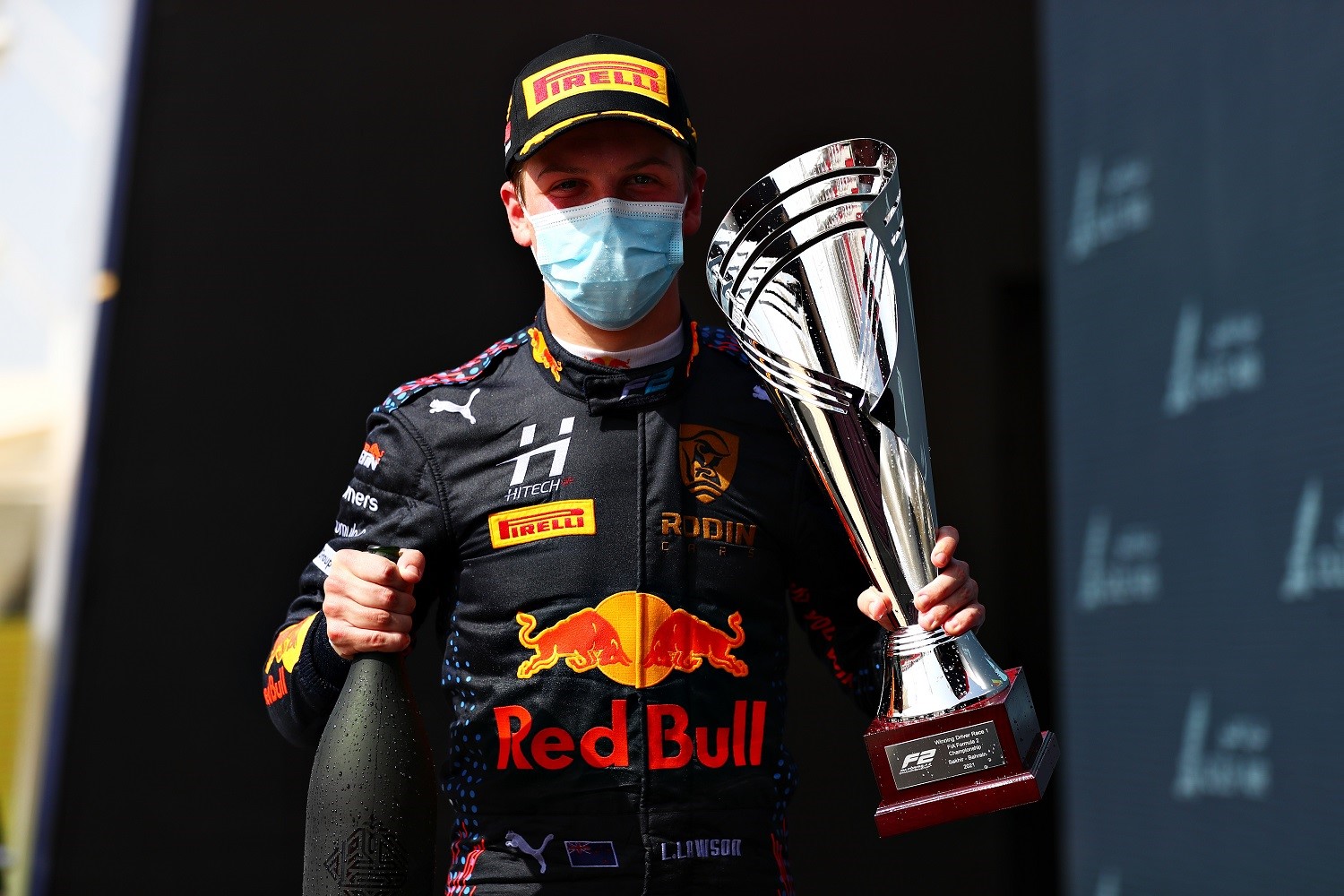 Hitech Grand Prix’s Liam Lawson drove like a seasoned pro on his Formula 2 debut, brushing off a stern challenge from second year Jehan Daruvala to take the opening win of season in Sprint Race 1 at Sakhir. Charouz Racing System rookie David Beckmann hung onto third to complete a youthful podium.

Scampering ahead of Théo Pourchaire at the start, Lawson spent the majority of the race in a to-and-fro with his former Formula 3 rival, before seeing the ART Grand Prix driver retire. This handed the Kiwi a more experienced challenger, as Daruvala – up from fifth – lined up behind him. However, the Carlin driver had no answer to his Red Bull academy teammates’ defensive masterclass and was forced to settle for second.

Impressively leaping from 11th to fifth at the start, Robert Shwarztman had a podium in his sights when Pourchaire retired and handed him fourth, but the PREMA’s attack was stalled by his teammate, Oscar Piastri. The reigning F3 champion had jumped ahead of Christian Lundgaard and kept Shwartzman occupied in the closing laps, before eventually settling for fifth.

UNI-Virtuosi’s Guanyu Zhou – who will begin Sunday’s Feature Race on pole – got his weekend off to a solid start, rising to seventh, ahead of Dan Ticktum. MP Motorsport’s Lirim Zendeli and Lawson’s Hitech teammate, Jüri Vips, completed the top 10.

Lawson nailed his first race start in F2, launching from third to first off the line and making the most of a sluggish getaway from Pourchaire. The reverse polesitter briefly dropped down to third at the first corner, but managed to claw his way back ahead of Beckmann and into P2.

Title-favorite Shwarztman endured a difficult return to the track on Friday, as mechanical troubles left him unable to set a lap time in the second run of Qualifying and had him starting back in 11th. Determined to make amends, the Russian gallantly flung his PREMA up to fifth inside of the opening lap.

A daring move from Ticktum failed to come off in the opening lap as the Carlin driver attempted a double overtake down the inside of Felipe Drugovich and Richard Verschoor, but clipped the back of the MP Motorsport and spun it backwards.

Ticktum somehow got away unscathed, but Drugovich was caught up in the collision and suffered damage. The Brazilian was forced into the pits for repairs and plummeted to last. Ticktum was later handed a 5s penalty for his troubles and fell to P8.

Two further retirements in the opening five laps decreased the field to 19, as Marcus Armstrong pulled over onto the gravel with mechanical issues. The Kiwi’s retirement also spelled the end for Ralph Boschung, who tagged the back of the slowing DAMS and spun off.

Pourchaire was keeping up with Lawson at the front, remaining within 2s of the Hitech driver, but Beckmann was struggling to hold on to third behind him. He locked up and momentarily went skidding off track, flinging dirt into the pathway of those immediately behind him.

The Charouz managed to return to the track, but the mistake cost him precious grip and handed an opportunity to Daruvala behind him. The Carlin took a hit of DRS and passed the German around the outside of Turn 4.

The Red Bull junior was then handed another position as Pourchaire lost power and fell out of the points. The Frenchman attempted to keep his ART going, but eventually conceded his race was run and pulled over.

Daruvala’s experience was beginning to show. The Carlin racer’s tyres were in better shape than Lawson’s and he had eaten into the gap between the two of them. With two laps to go, Lawson was just about clinging on. Their battle continued into the final lap, but Daruvala just couldn’t find any way past and crossed the line in second.

There was little change behind them, though Piastri had managed to tussle ahead of Lundgaard for fifth place, directly behind his teammate Shwartzman. The Australian started to harry the back of the PREMA and chanced his arm with a brave move down the left, but was forced to back off as he ran out of space, allowing Shwartzman to hold onto fourth. The duo’s battle allowed Beckmann to retain the final podium spot.